Printed in Reutlingen (Southern Germany), by Johann Otmar, ca. 1481. (âBefore May 1, 1485â, according to the Gesamtkatalog der Wiegendrucke).

AN EXCEEDINGLY RARE INCUNABLE EDITION of this detailed exposition on celebrating the Mass, the central liturgical rite of the roman Catholic Church on its structure and its theological, moral and mystical meaning, with a particular emphasis on the the Canon of Mass.

This is, likely, the 2nd edition of this work, first printed in Strassburg by Heinrich Eggestein or Georg Reyser, about 1473-75.

Of the rare edition offered here only 26 copies are known worldwide (according to BL ISTC). Another edition of this work produced by Otmar, issued with a colophon dated 1 Sept. 1483, but otherwise virtually identical to ours, is less scarce, with over 50 copies recorded worldwide.

This treatise on Mass, written circa 1412 and extant in several manuscripts, was published anonymously. It is attributed (with a great degree of certainty) to the Leipzig theologian Nicolaus StÃ¶r (see e.g. the Gesamtkatalog der Wiegendrucke), although some catalogues ascribe it to Vincent Gruner (see e.g. Hain). However, Grunerâs work with a similar title is, in fact an abridged version of the StÃ¶râs treatise.

Nikolaus StÃ¶r was born in Silesian town of Schweidnitz then belonging to the Kingdom of Bohemia (now Åwidnica in south-western Poland). In 1387 he moved to Prague, where he obtained Baccalaureate in Arts in 1390, and in January 1393 became a Magister, and began lecturing in February of same year. He chose to study under supervision of Johannes von MÃ¼nsterberg, who later became his colleague at Leipzig.

In 1399 StÃ¶r served as the Dean of the Faculty of Arts in Prague and in 1402 became the chancellor of the university. StÃ¶r was active in the polemic against Jan Hus (as we learn from the Husâs own writings) being one of the professors, who advocated equal rights of the three minority peoples - Polish, Bavarian and Saxon - against Czech majoritarian domination. The decree of King Wenceslaus IV of Bohemia to give three seats on the University Council to ethic Czechs (with only one seats representing all the other ethnicities) compelled many non-Czech students and professors to leave the University. Among them was magister Nikolaus StÃ¶r, who moved to the recently founded University of Leipzig (which was founded on 2 December 1409 by Frederick I, Elector of Saxony).

In his Expositio officii missae, which StÃ¶r dedicated to Leipzig University and its patron Saints - St. Laurentius and John the Baptist - he undertook the study of theological, liturgical and mystical meaning of various aspects of Catholic Mass: in particular, the canon, signa, motus, gesta, etc. In his presentation and argumentation StÃ¶r extensively uses medieval (as well as biblical and patristic) sources but and explains the material in clear and accessible way, which made the treatise a popular manual for priests.

The work is divided into three books:

I. De quibusdam precedentibus et disponentibus ad dominici corporis Christi dignam tractacionem et sumpcionem (âOn certain conditions and provisions for the worthy treatment and reception of the body of Christâ).
II. De perficientibus hoc sacramentum dignissime (âOn those who are most worthy to perform this Sacramentâ).
III. De periculis in hoc contingentibus (âOf the possible dangers in this processâ).

Book I is particularly interesting. It comprises five chapters: the 1st deals with the study of the Holy Scriptures and gives the reader some practical example facilitating its study. The 2nd discusses the Mystery of the Eucharist. The 3rd treats âof the minister who performs this Sacrament of the Mass, and of certain things pertaining to himâ, elaborating on the necessary moral and spiritual qualities of the officiating priest. The 4th and 5th Chapters explain the structure of the mass, its various forms and attributes.

Thus, StÃ¶râs Expositio offers a comprehensive guidebook to the Sacrament of Mass for the clergy, from both the moral-theological as well as the ceremonial standpoint.

This rare incunabulum was printed in Reutlingen, a city in Baden-WÃ¼rttemberg, Southern Germany. âOnly two printers worked at Reutlingen in the 15th century, Michael Greyff [...] and Johann Otmar. [â¦] Both were at work in or before 1479, but Mr. Proctor gave the precedence to Michael Greyff. If all the books inferentially attributed to Greyff were printed by him, he produced between sixty and seventy, against some fifty assigned to Otmar. Both were Latin printers, Otmar publishing mainly theology, while Greyff after beginning with theology turned mainly to educational handbooks [â¦]. Otmar continued printing at Reutlingen until 1495, and is found starting again at TÃ¼bingen three years later.â (Hawkins/Pollard, Catalogue of Books Mostly from the Presses of the First Printers, p.76)

Otmar is distinguished as the printer of the First Edition of the De lamiis et phitonicis mulieribus [Reutlingen: Johann Otmar, not before 10 January 1489], the first illustrated book on witchcraft.

b1r is a title-page (with a single line of text, verso blank); Prologue on b2r- 3r text. Leaf r5r,v at the end contains a Tabula (i.e. table of contents).

Two original fly-leaves in front containing three full pages of manuscript in 15th-century cursive hand (contents have not been researched).

With an ownership inscription (on the title-page) of the Benedictine Abbey of Engelberg (in Engelberg, Canton of Obwalden, Switzerland). Founded in 1120 by Count Conrad of Seldenburen, the abbey is dedicated to Our Lady of the Angels, and occupies a commanding position at the head of the Nidwalden Valley. William Wordsworth wrote a poem about the abbey entitled "Engelberg, The Hill of Angels"

The abbeyâs impressive libraryâs collection of manuscripts, incunabula, and early printed books has continually grown since its founding and now holds about 135,000 volumes in total. 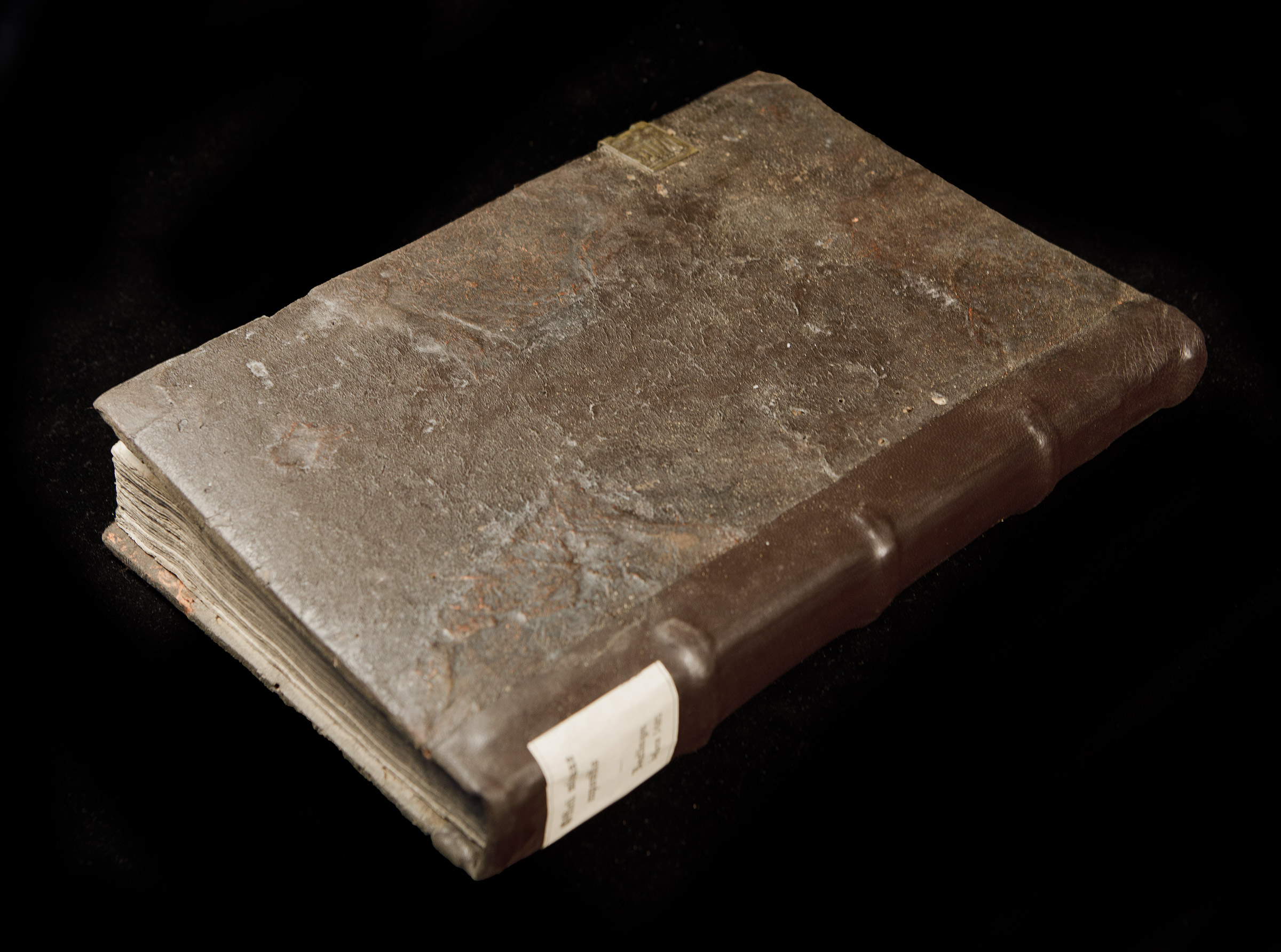 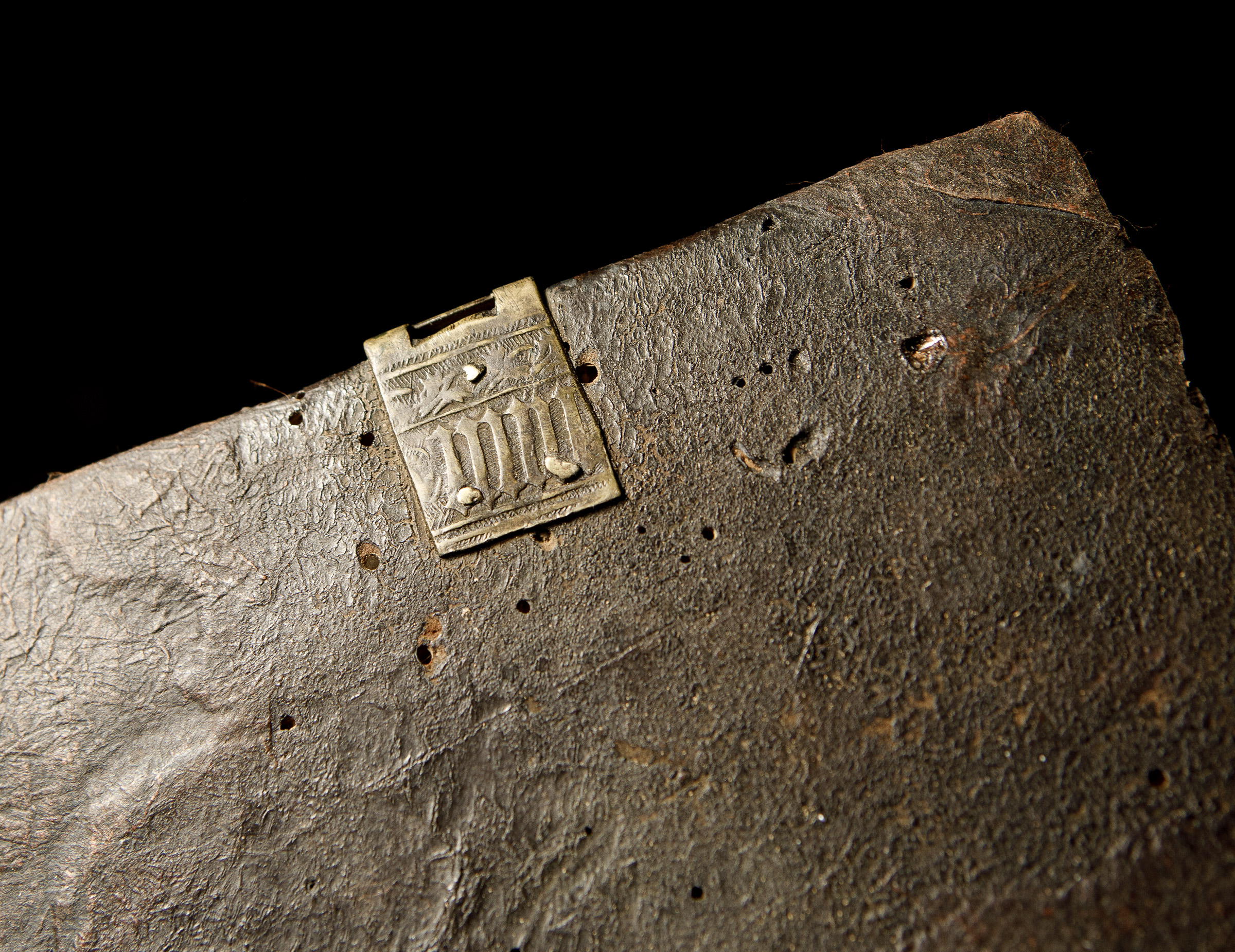 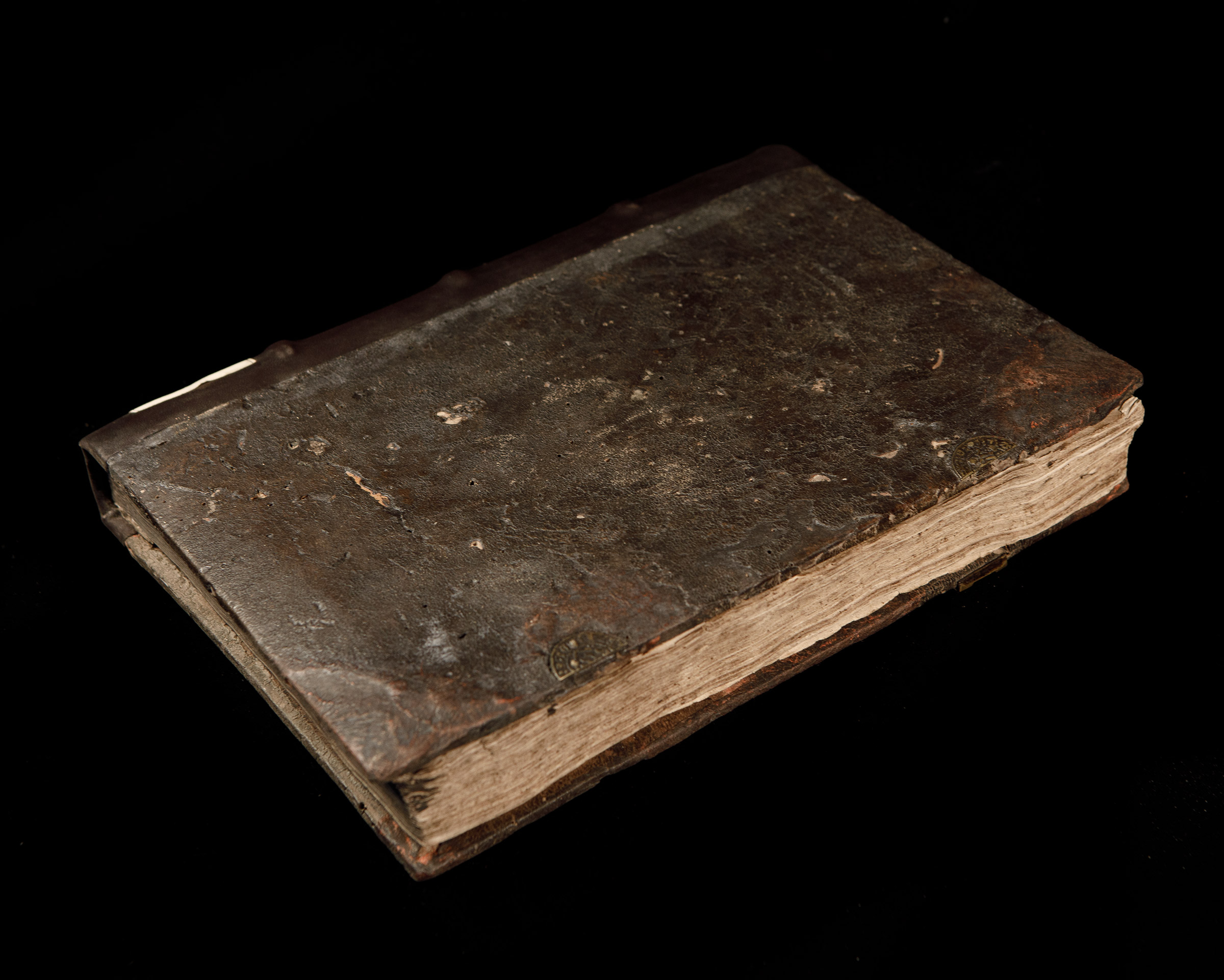 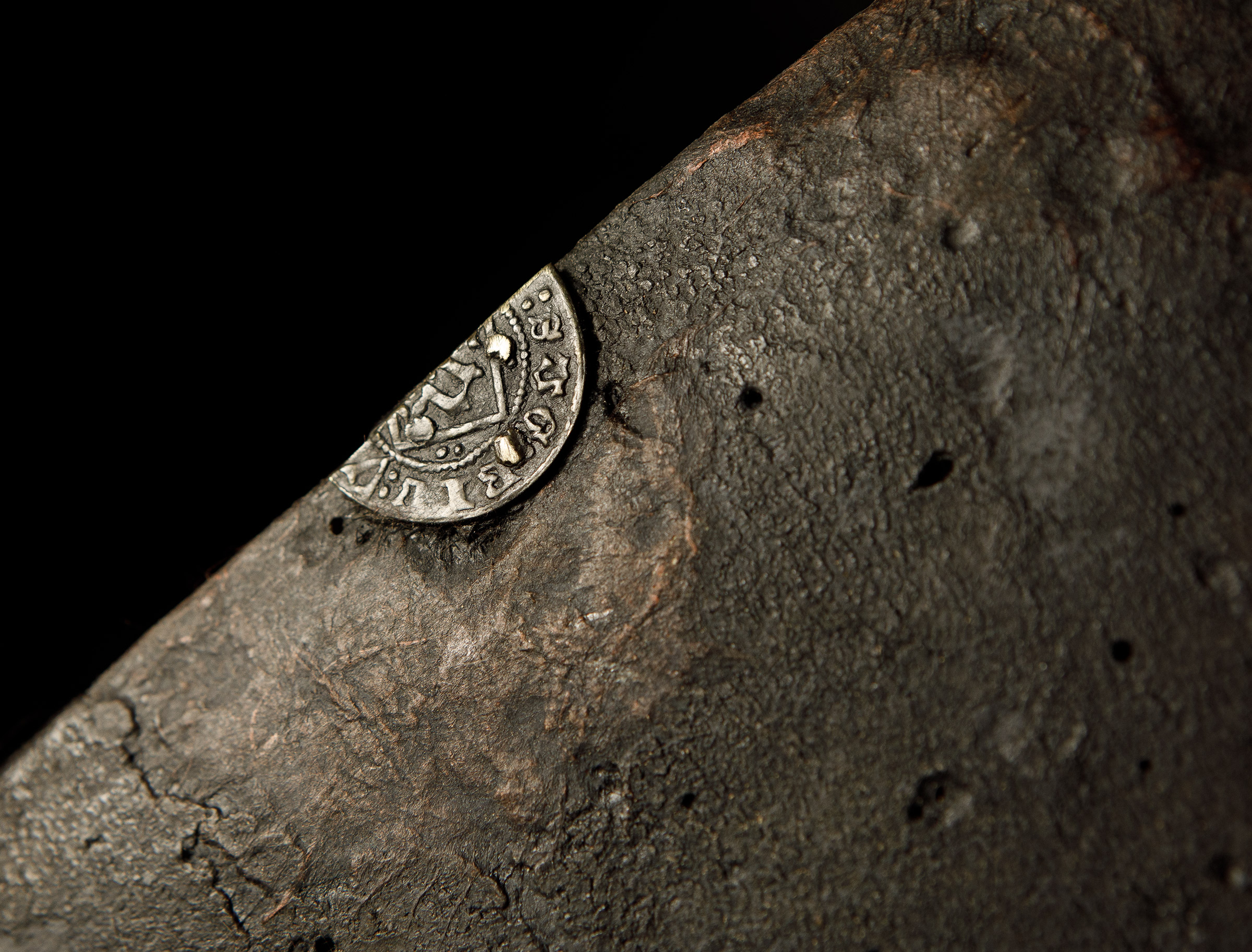 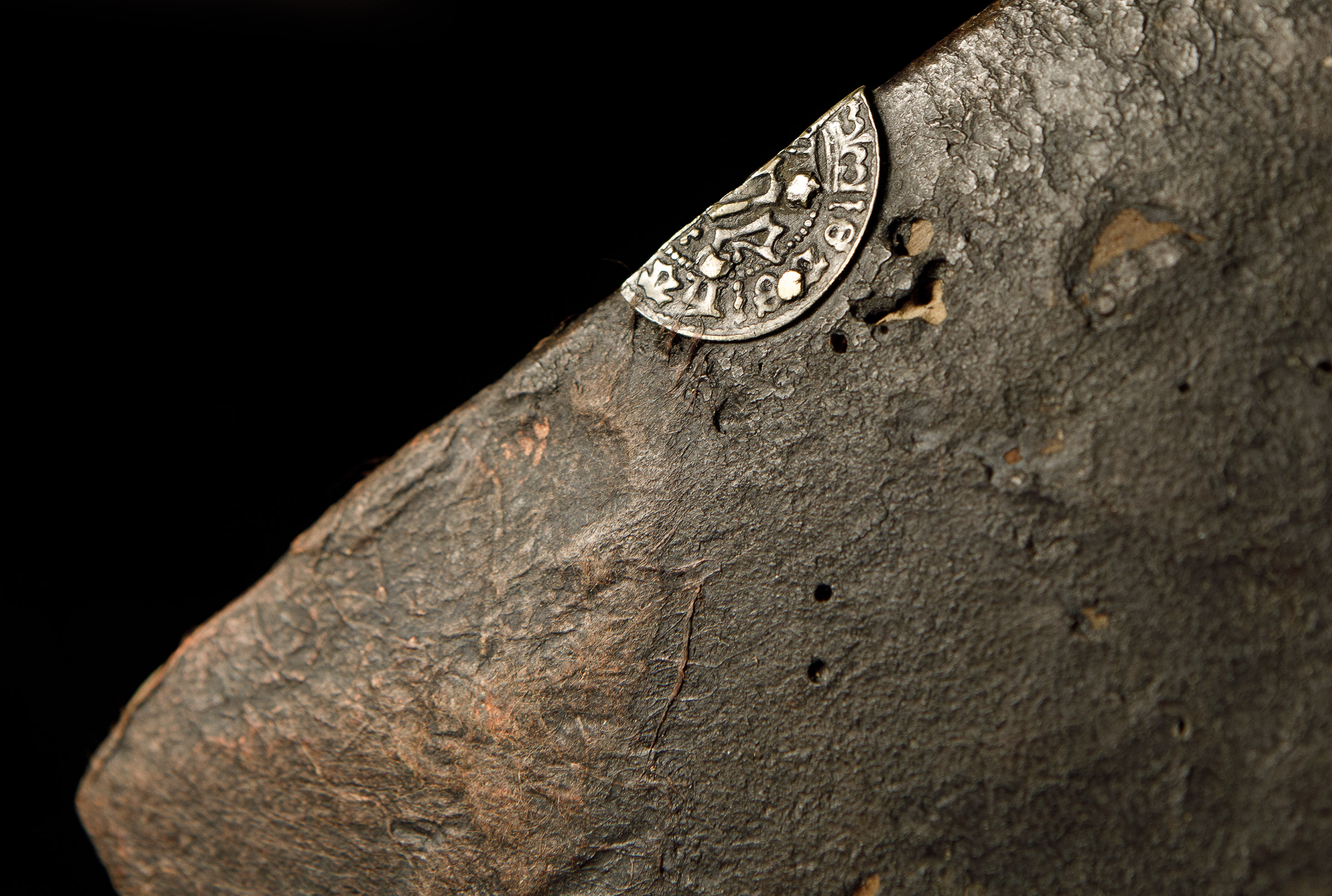 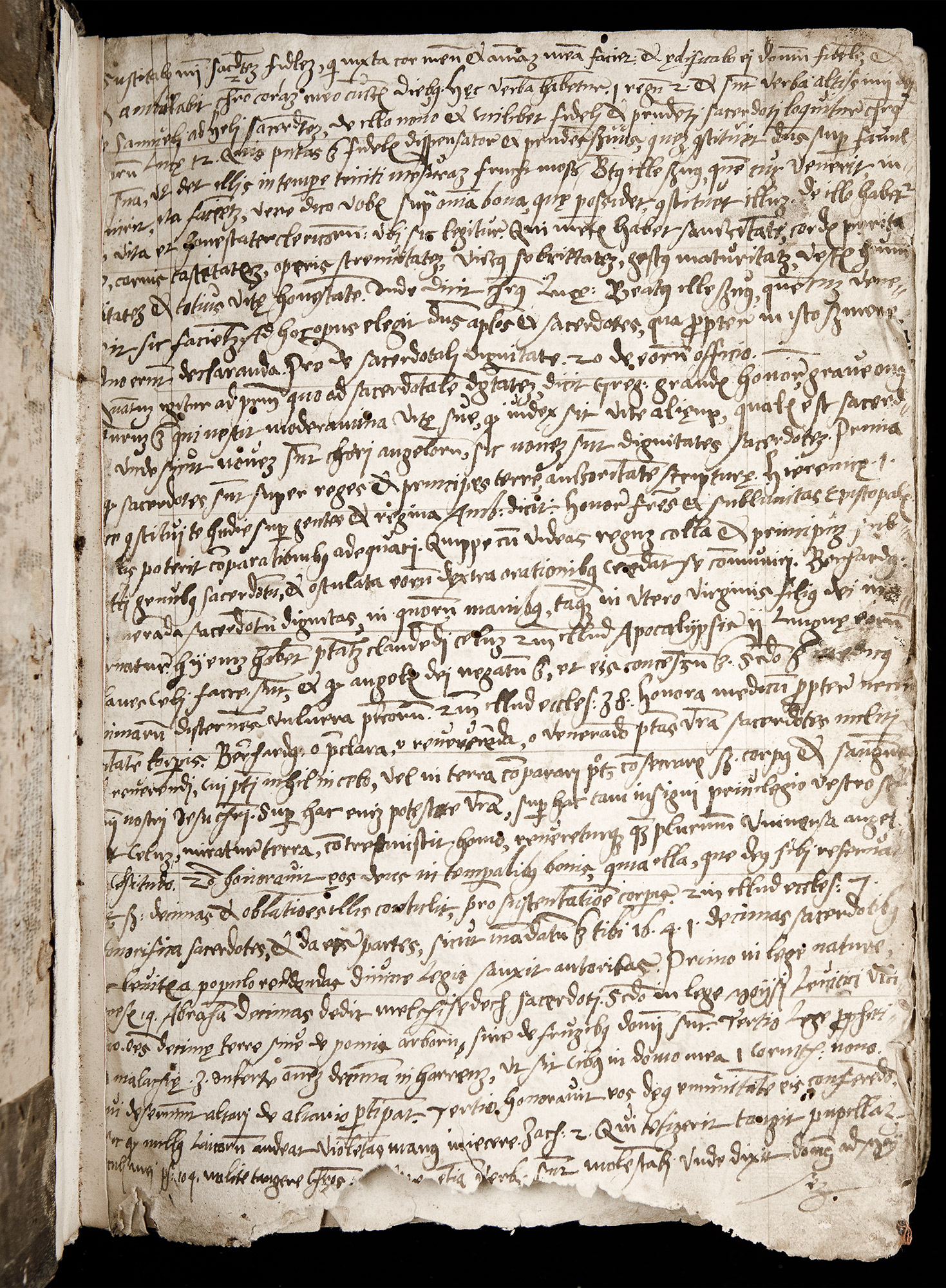 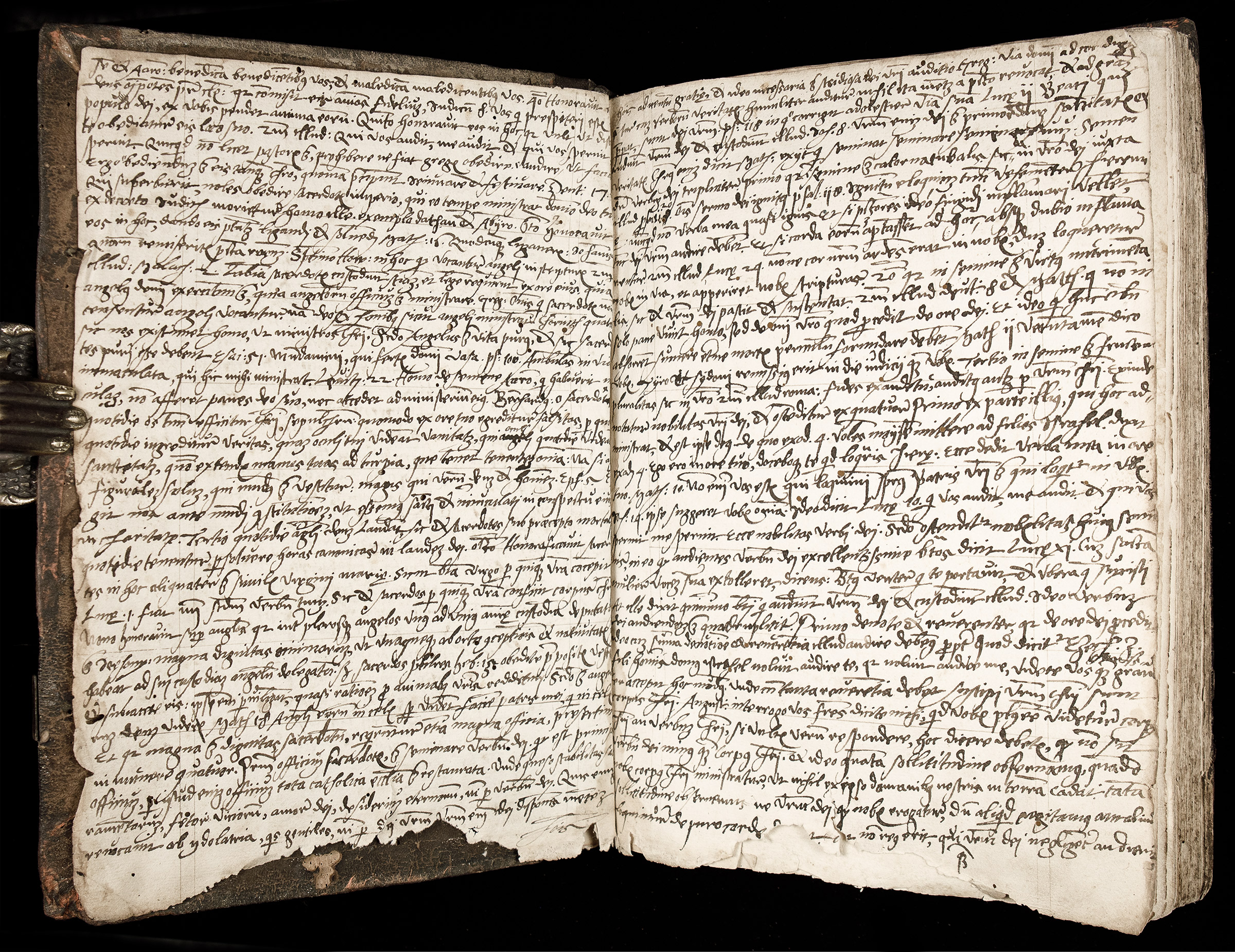 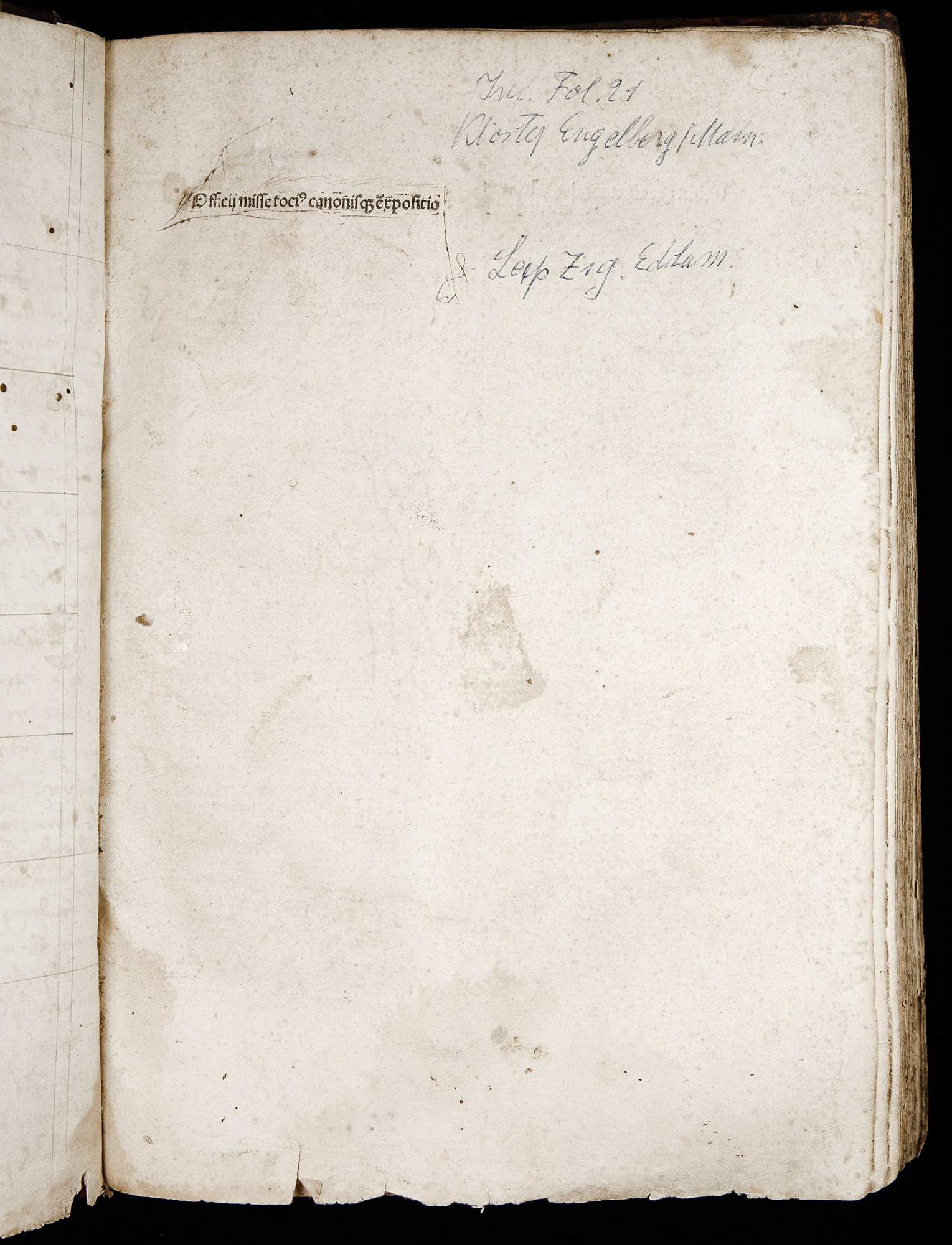 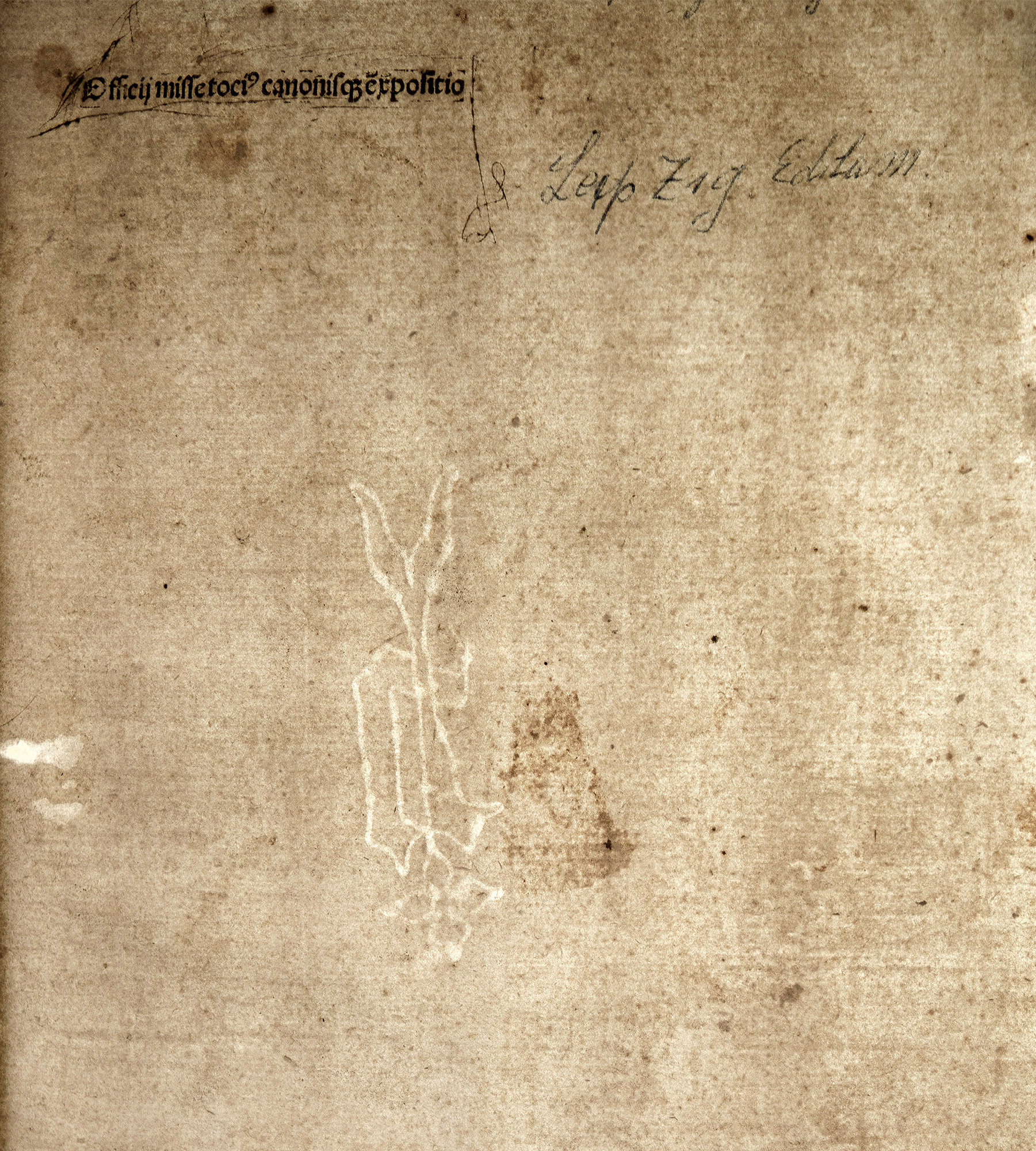 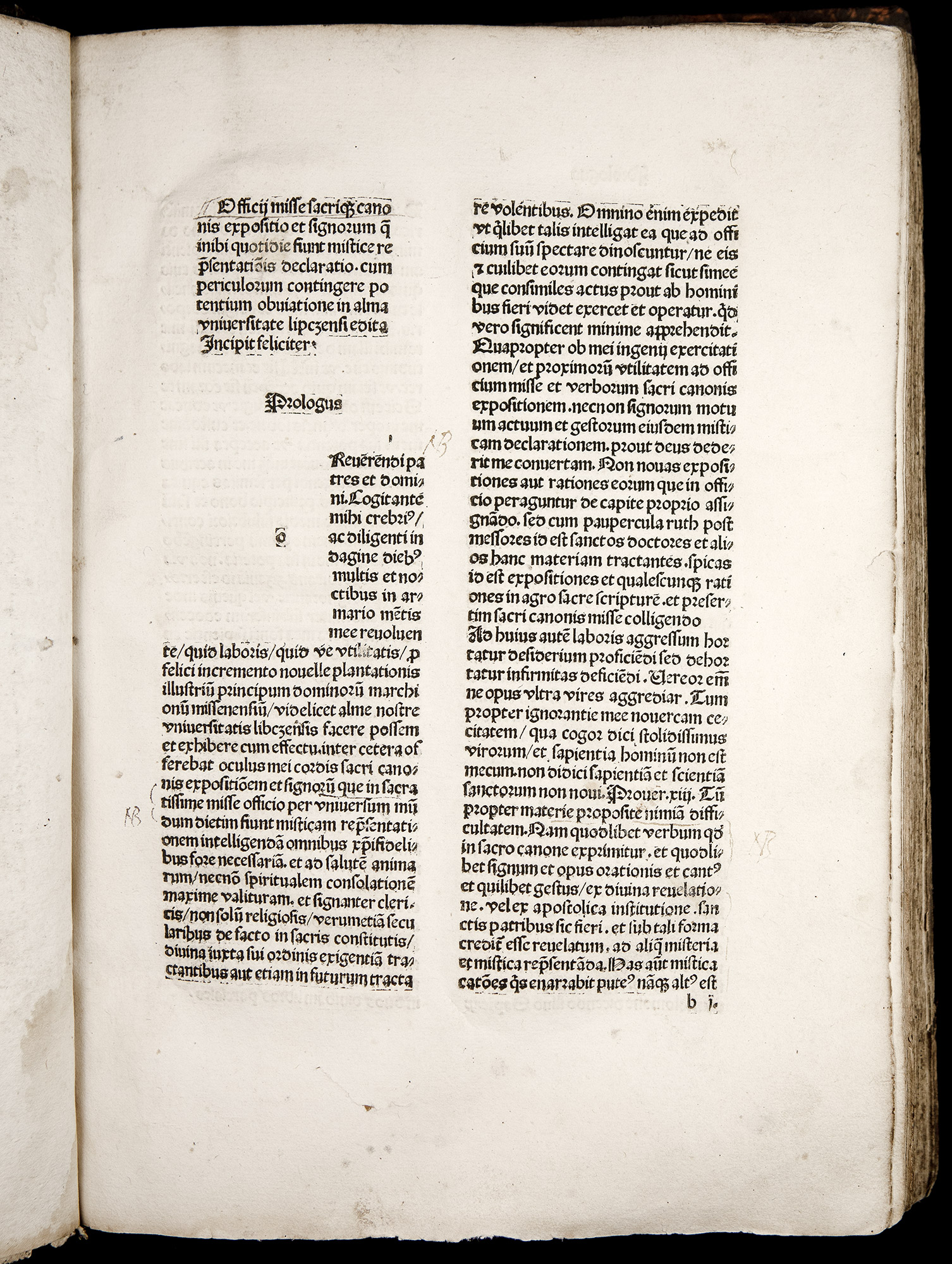 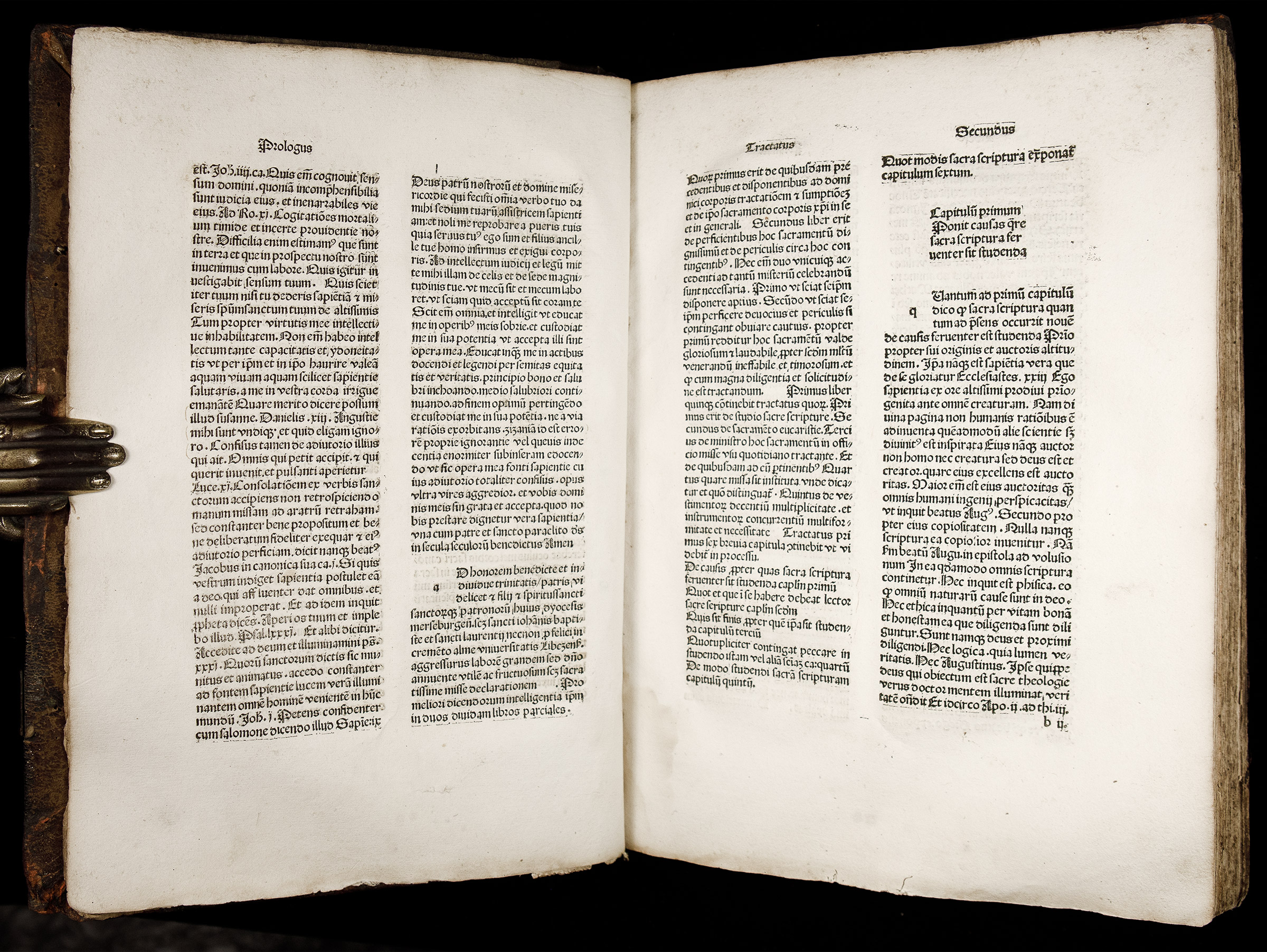 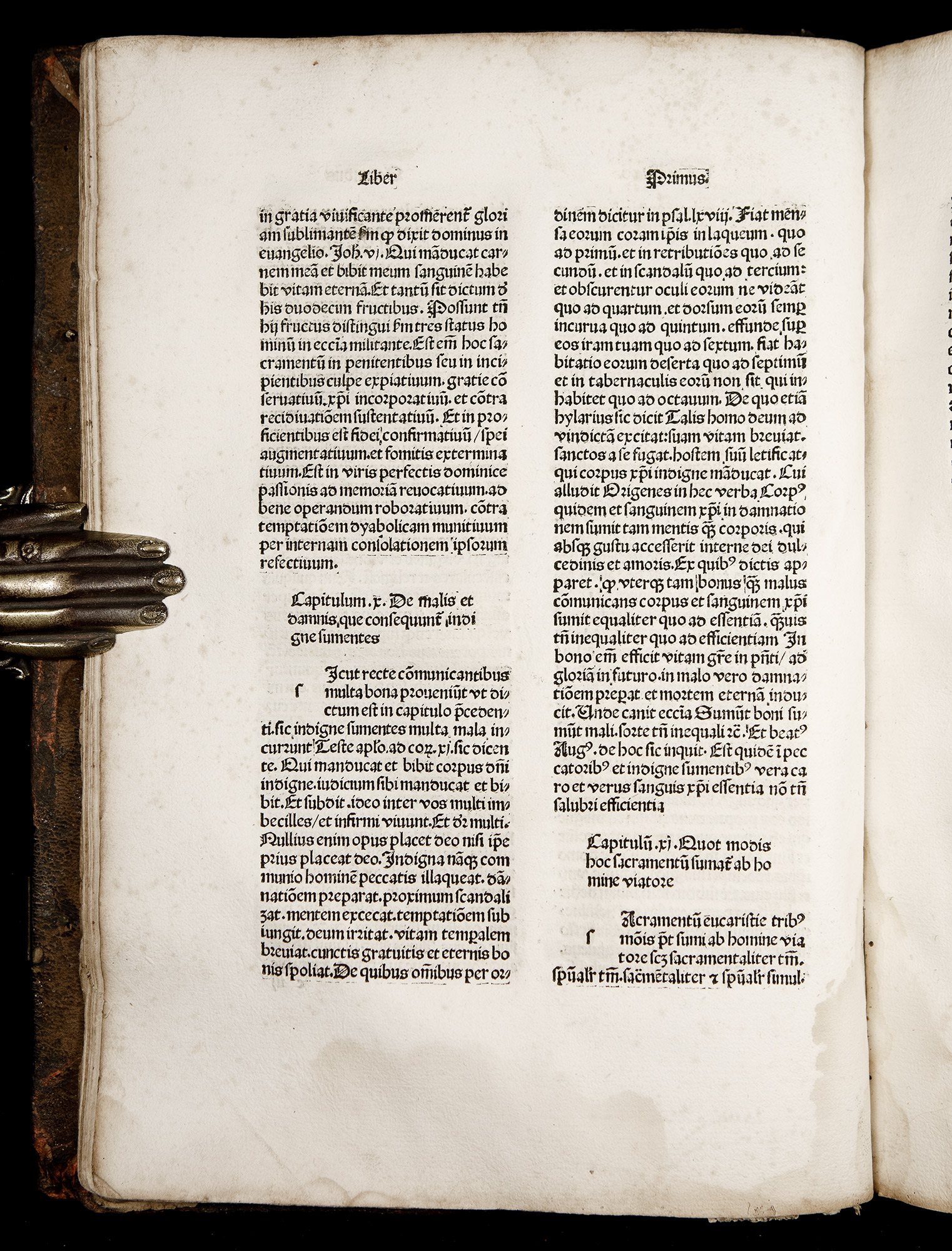 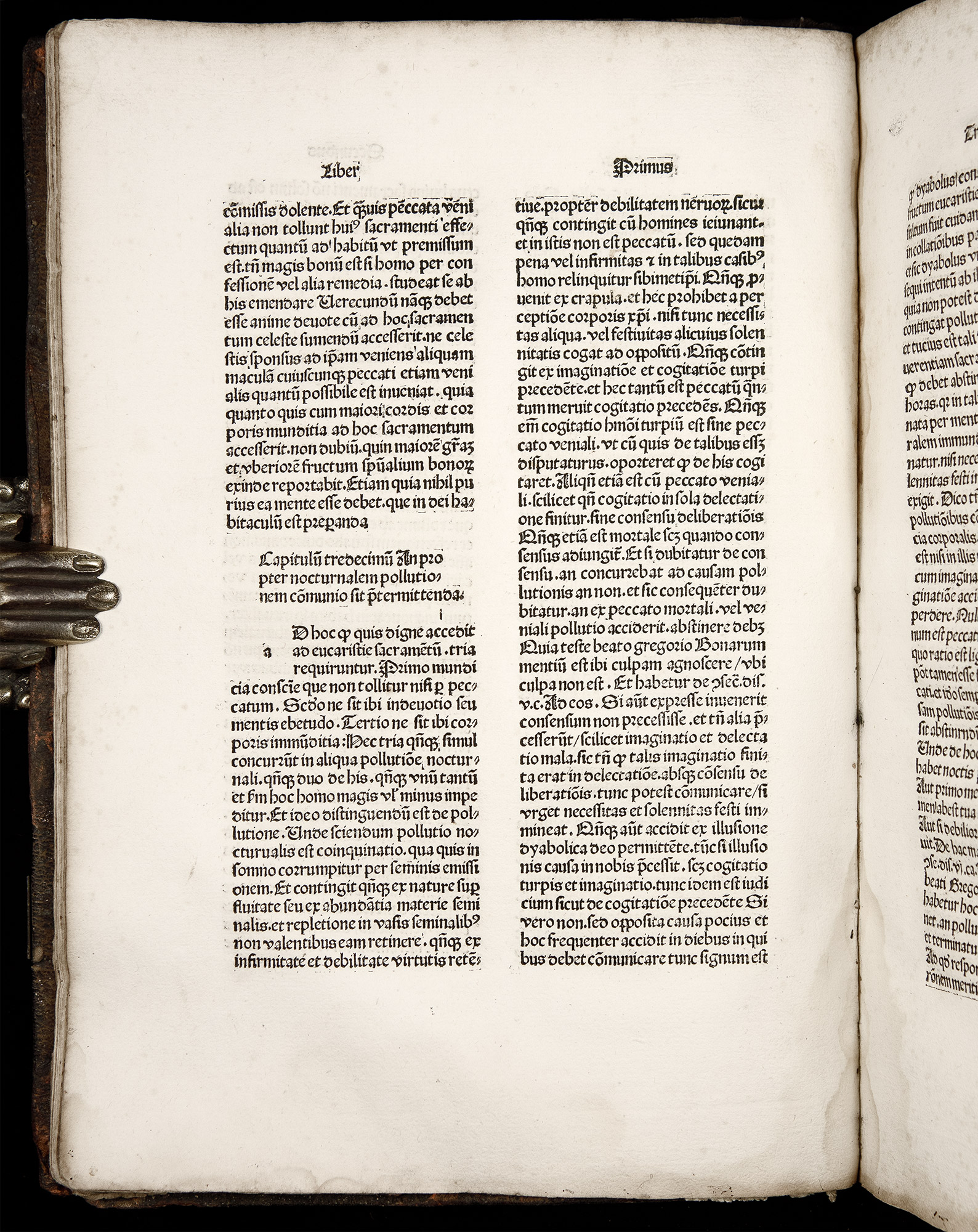 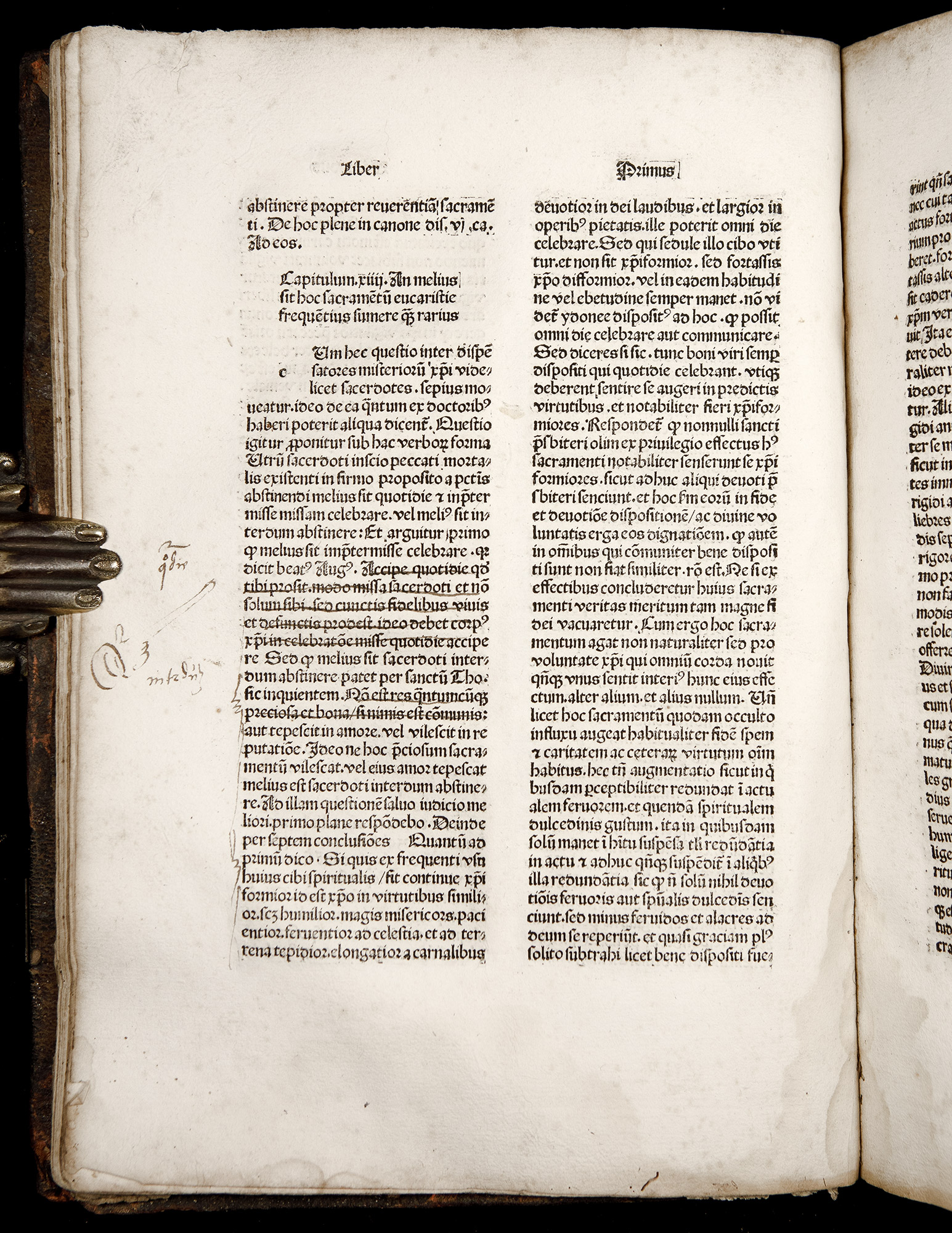 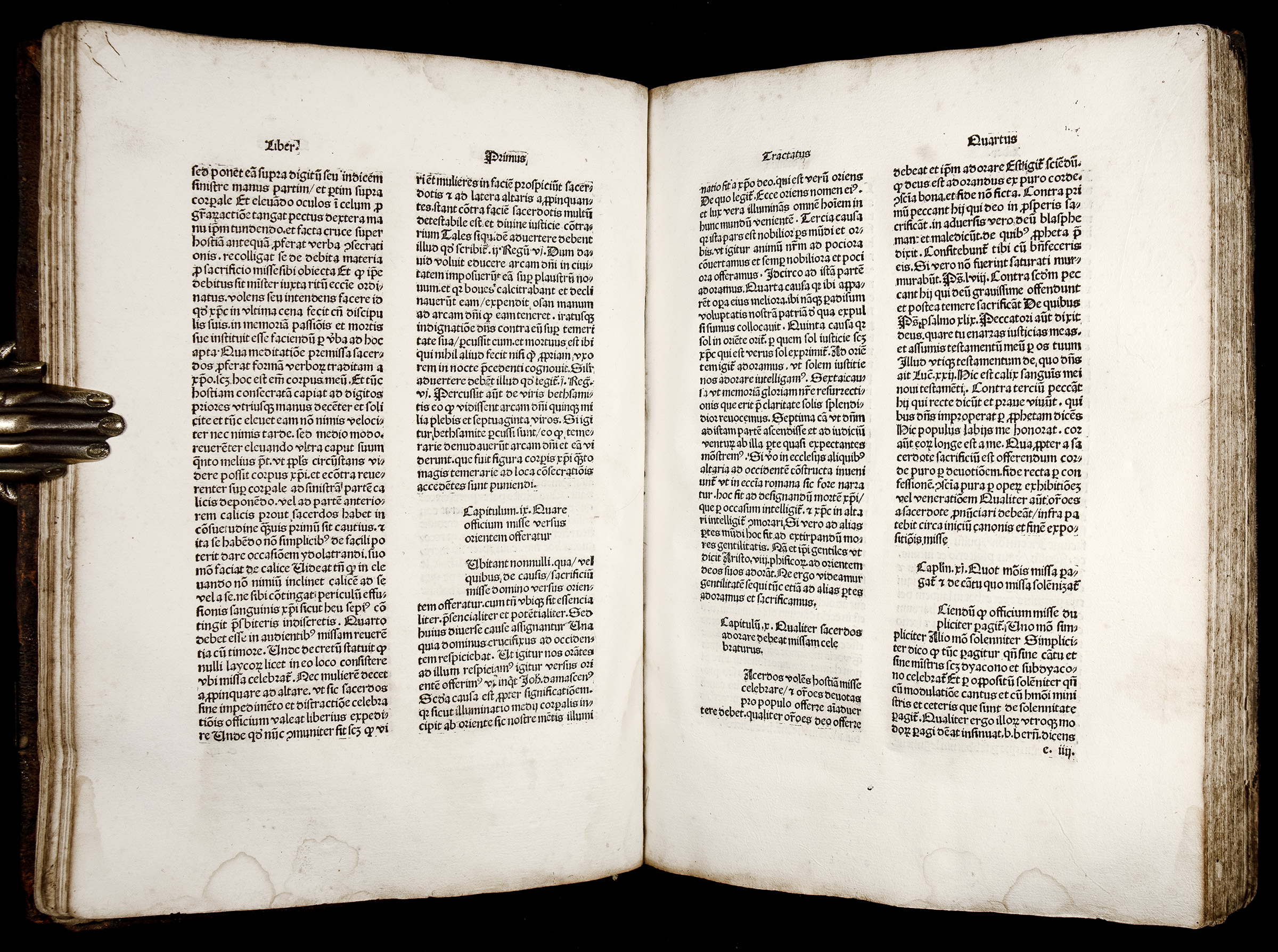 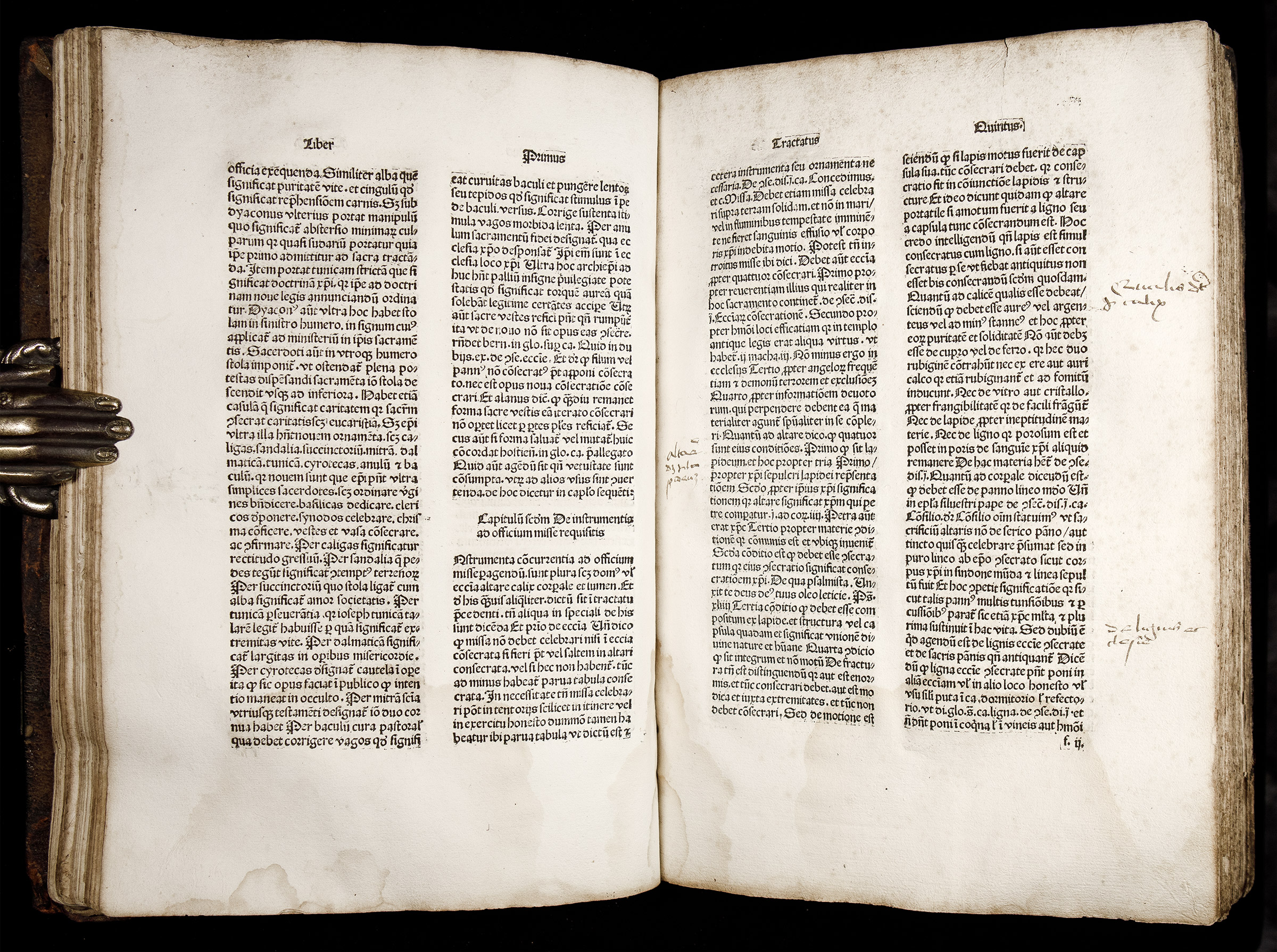 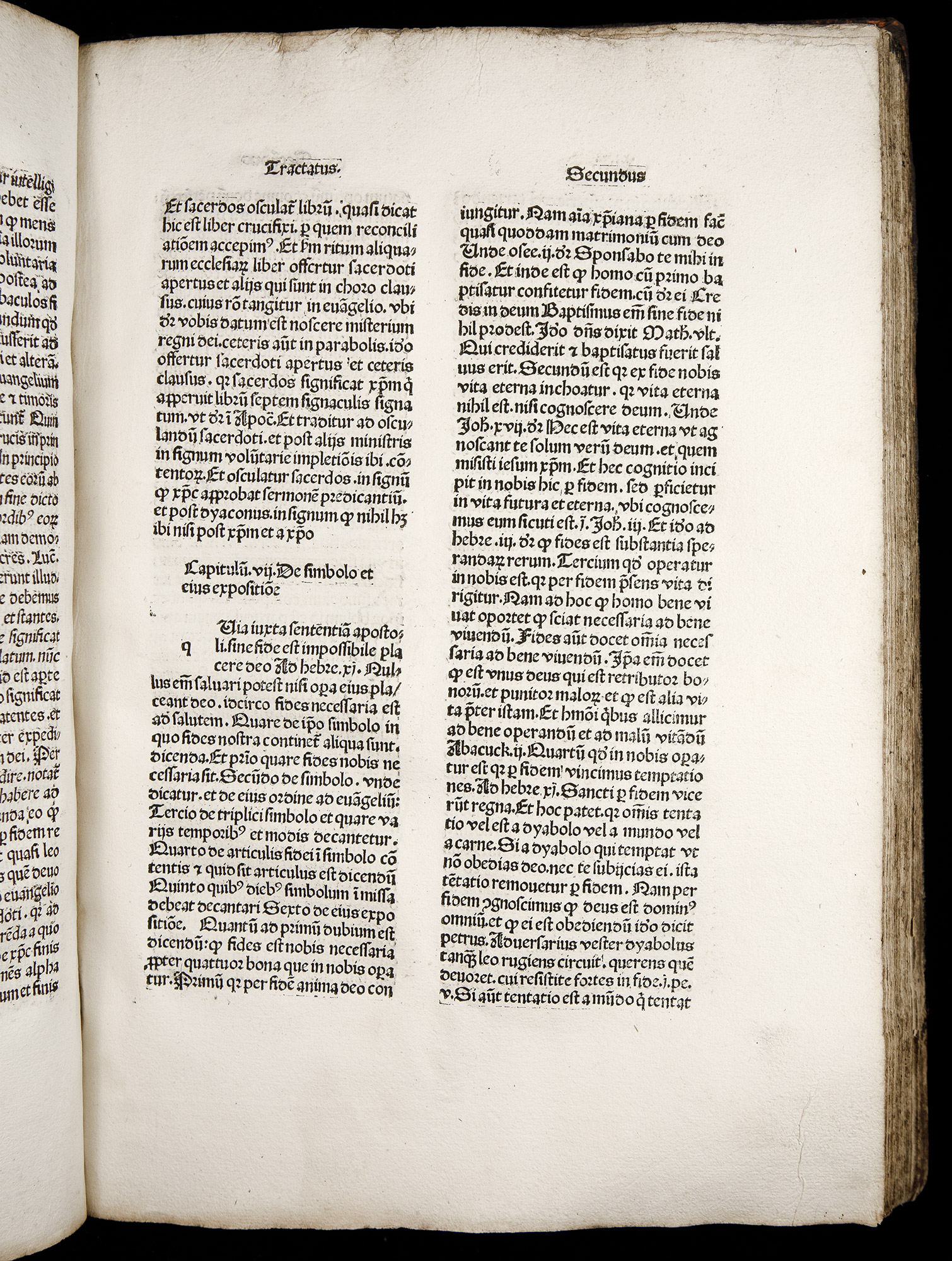 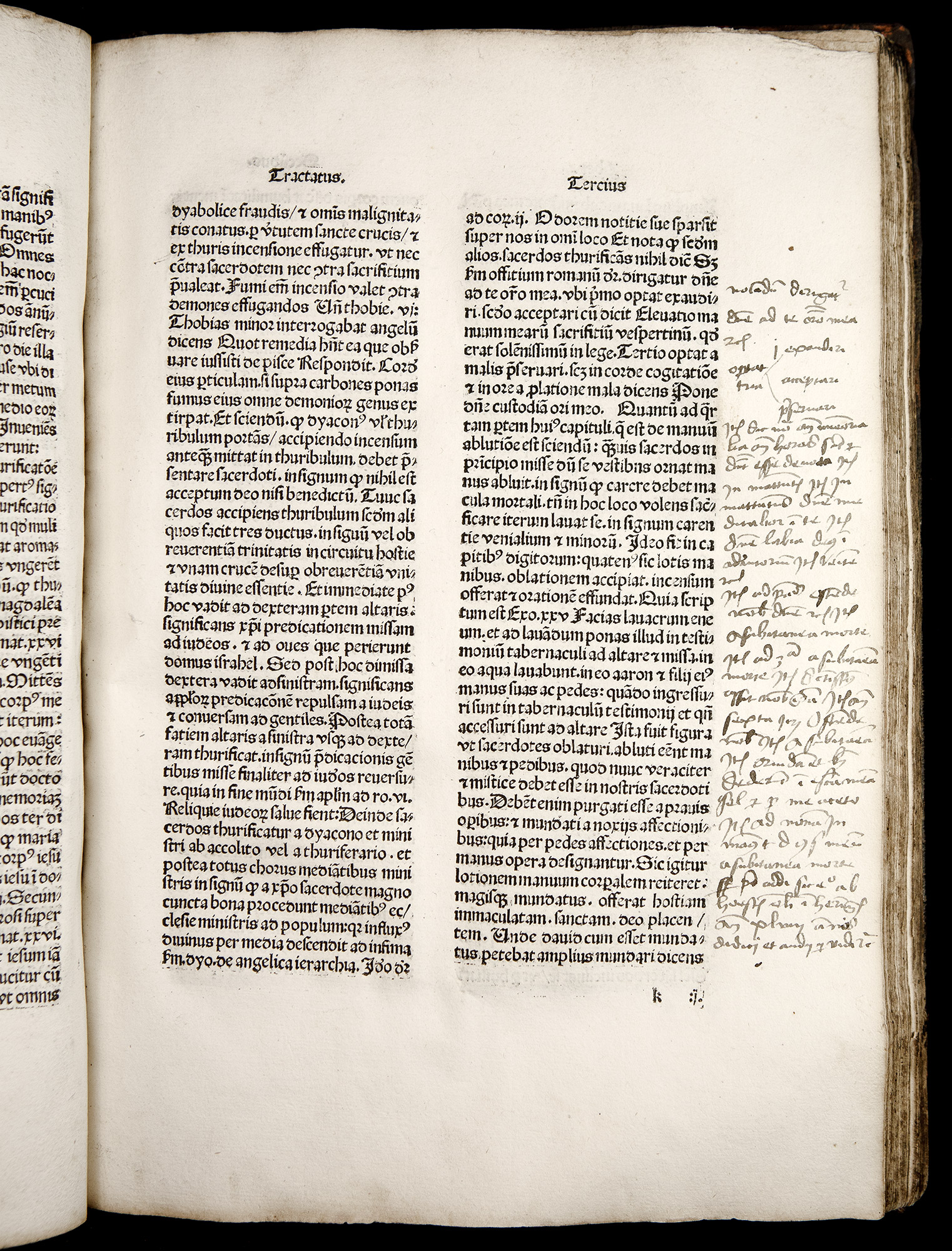 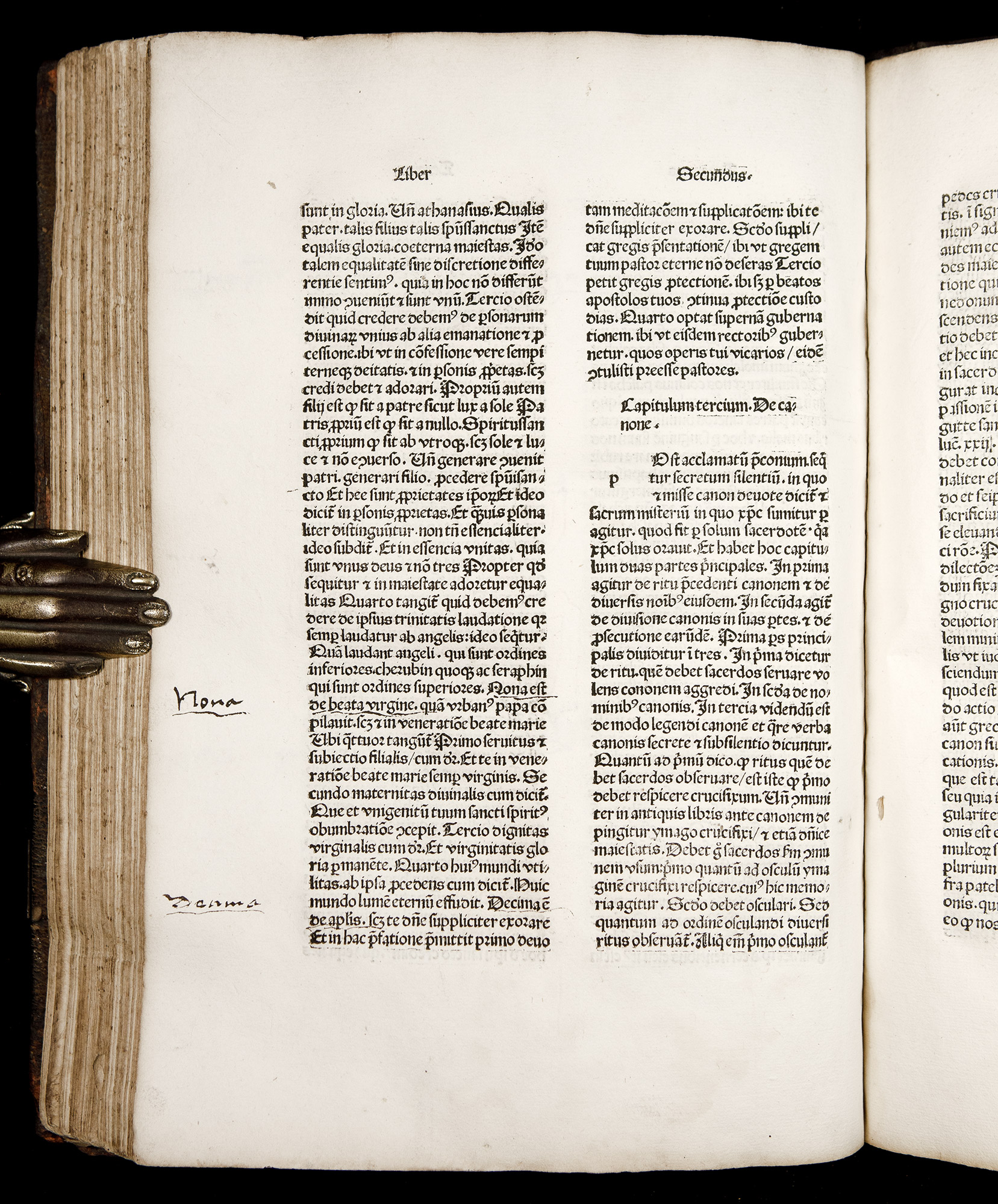 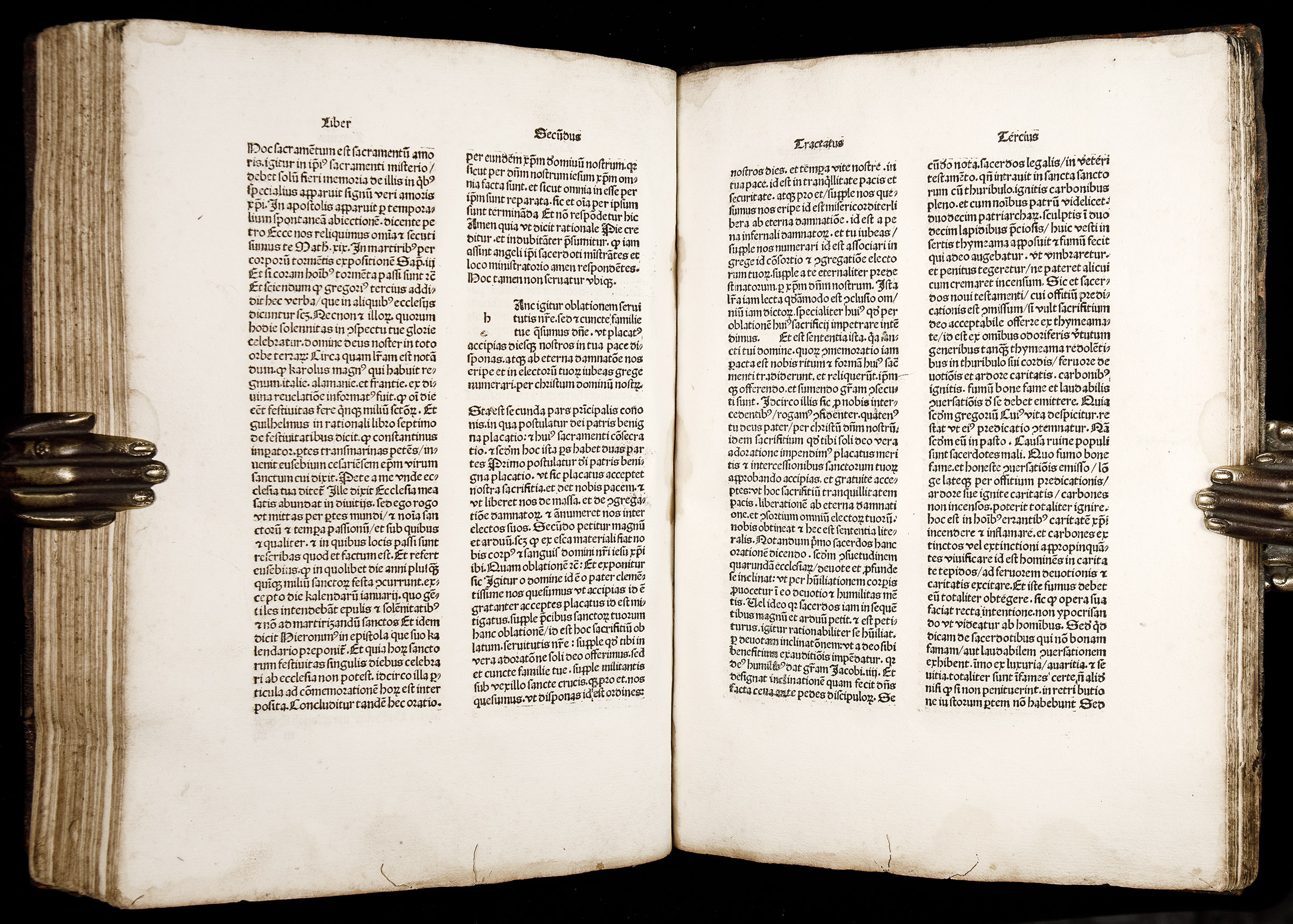 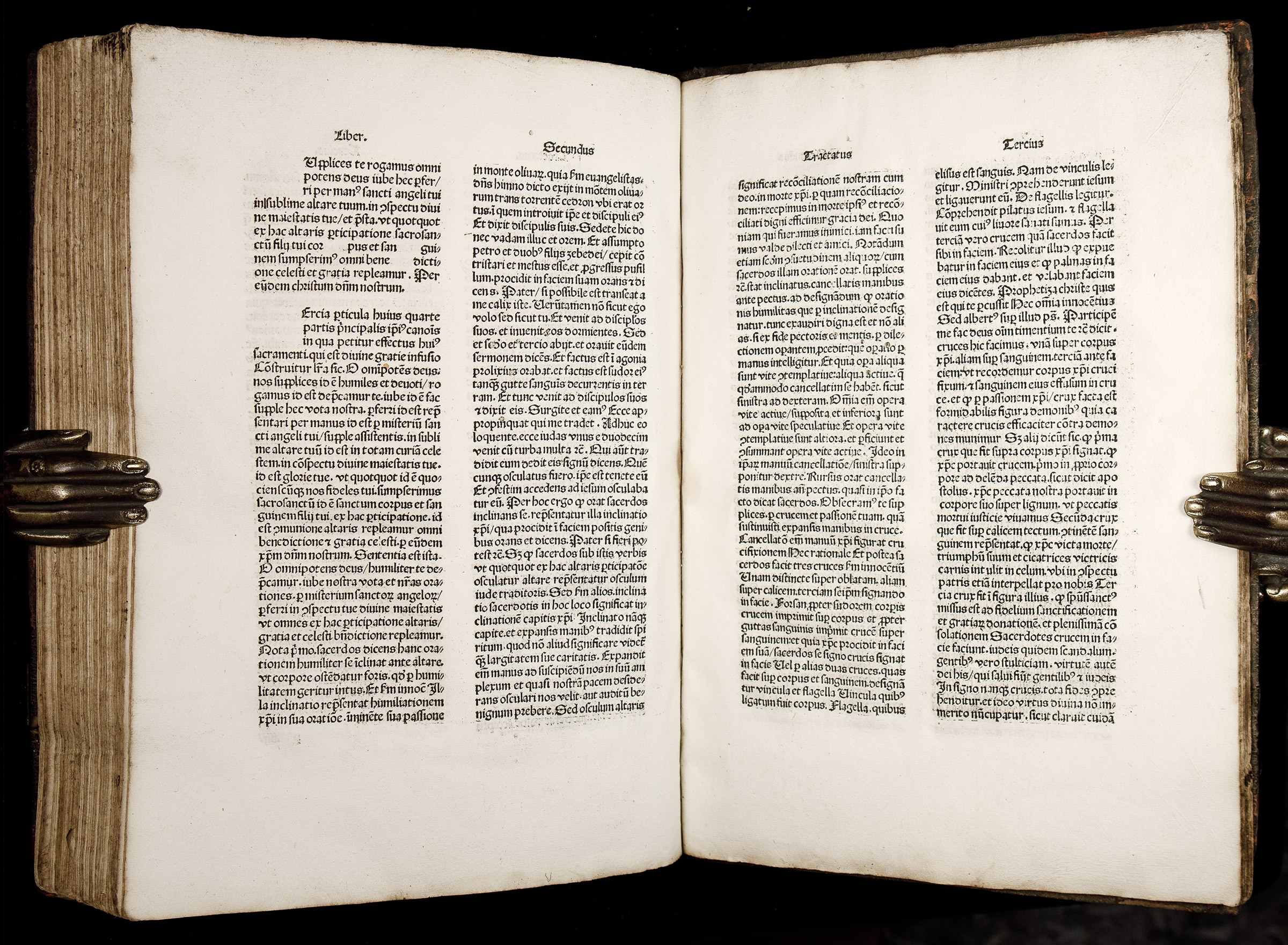 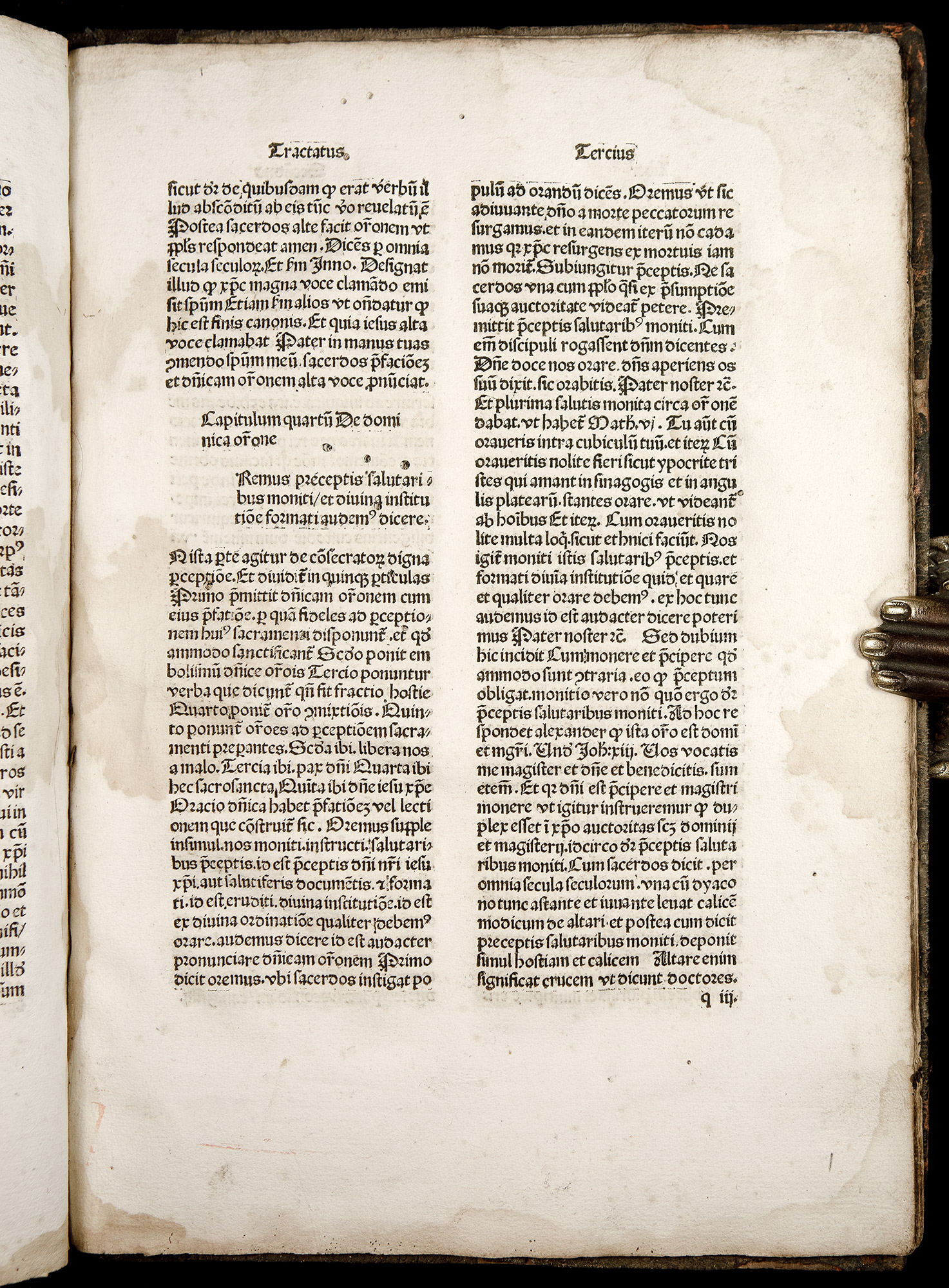 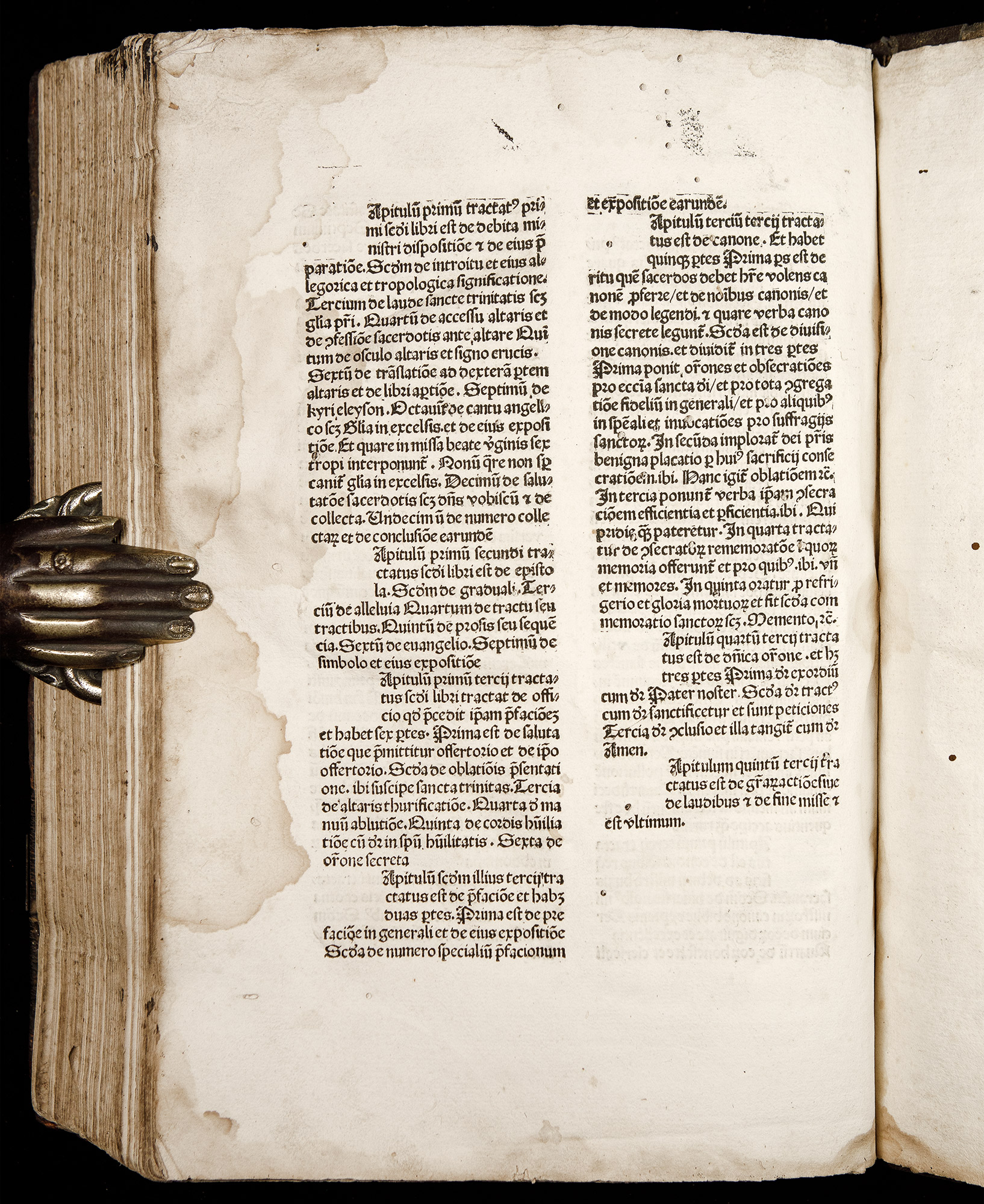 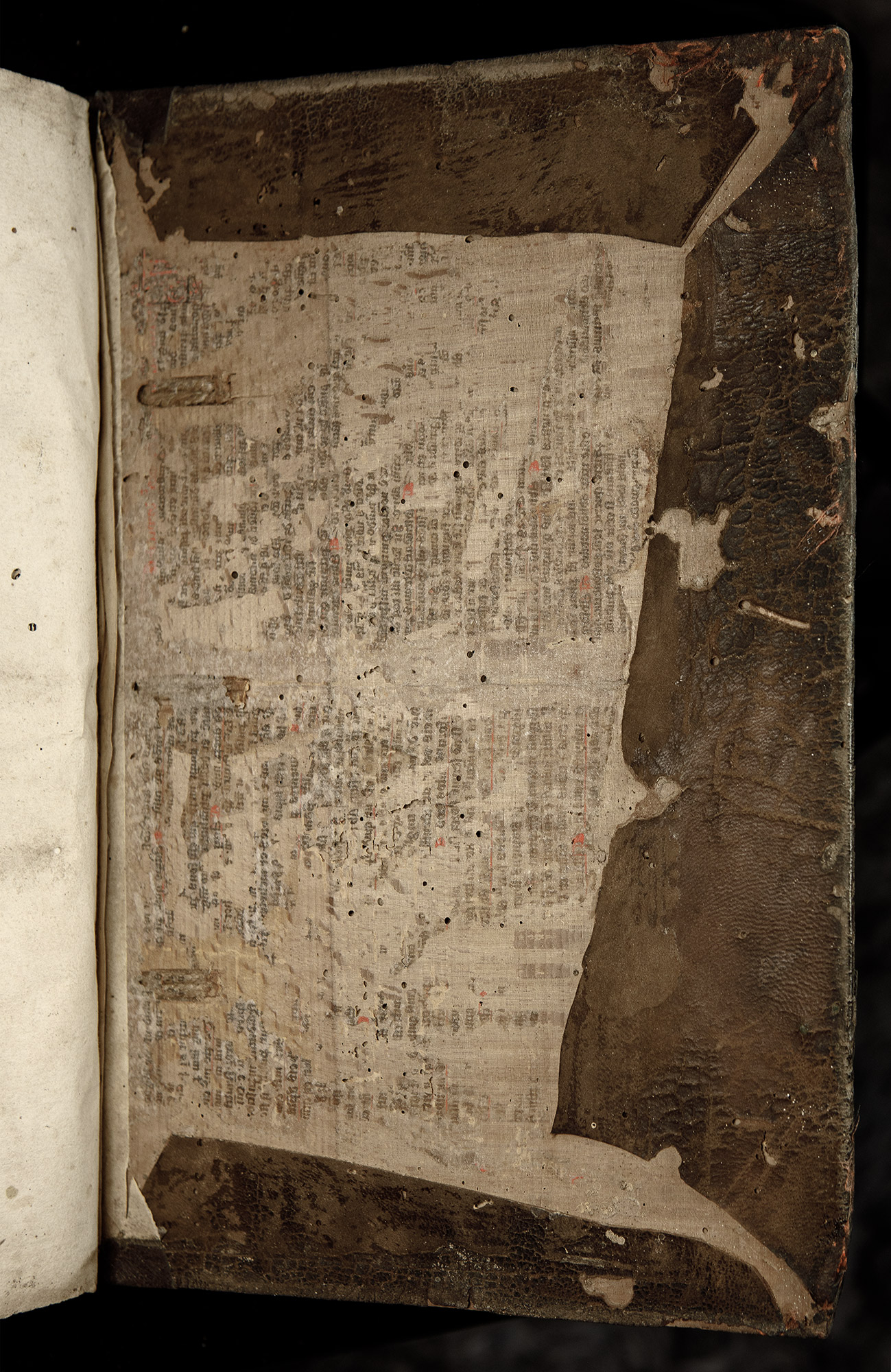