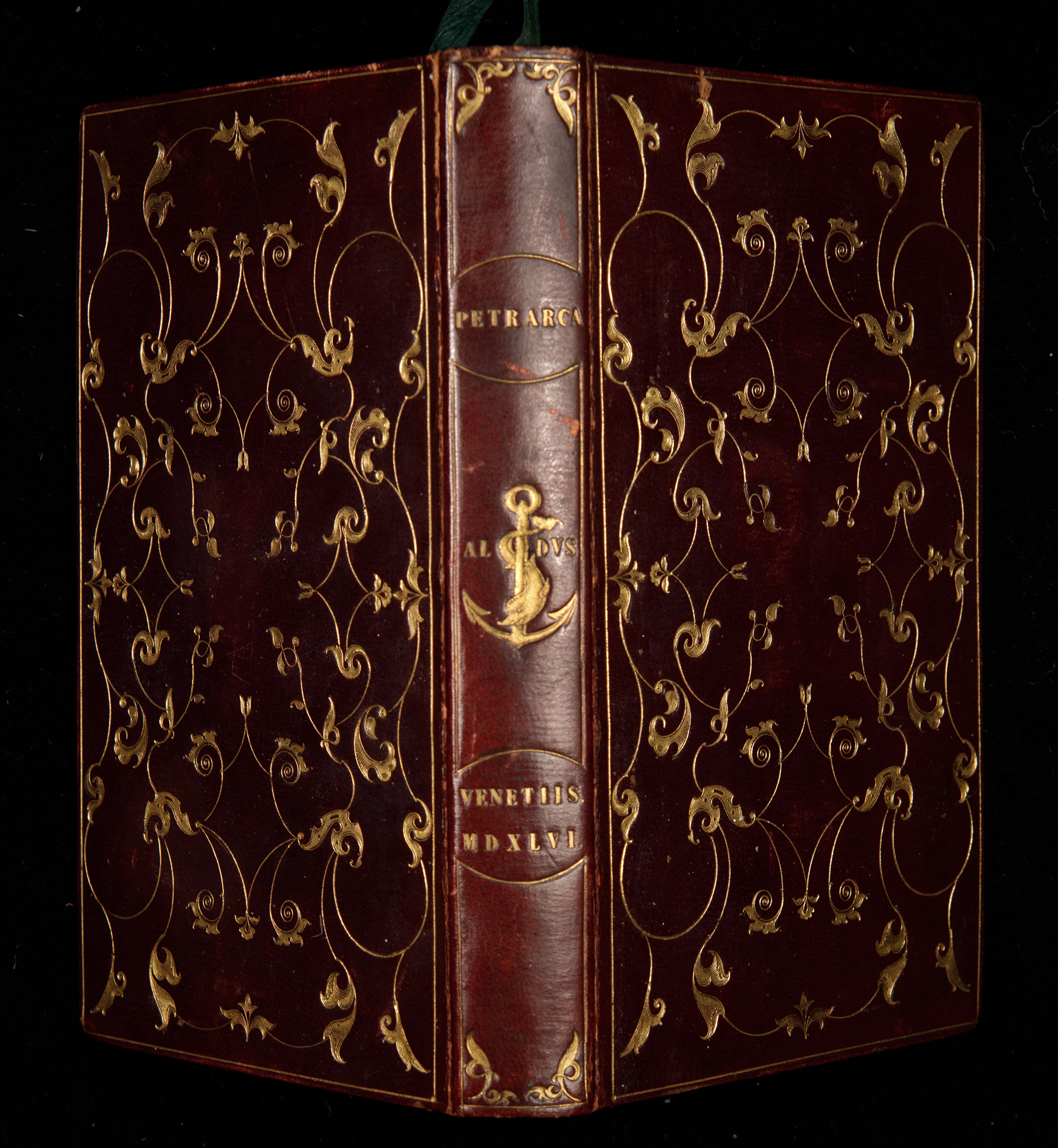 THE LAST AND THE BEST ALDINE EDITION of Petrarchâs complete vernacular poetry. SCARCE!

This fifth, and final Aldine edition of Petrarch printed by Aldus and his heirs appeared at the time when (starting from the beginning of 1540s), the Aldine Press decidedly overcame their reluctance to print the "popular literature", recognizing how favourably that kind of literature had become among the Venetian literati of time, Therefore, Paolo Manuzio considerably expanded the production of Italian titles, printing, among others, the collected writings of Macchiavelli.

This 1546 edition of Petrarca presents a very elegant printing of the 'naked' text of Petrarchâs collected Italian verse, without any commentary or explanatory apparatus, the way he was printed in 1470s. This editorial decision has been viewed by many as rather peculiar, given that the dominant trend at the time was to print important authors with annotations and exegetic apparatus. Paolo Manuzioâs choice to print Petrarch without commentary (particularly surprising given that the previous Aldine edition of 1533 was printed with notes) can only be interpreted as an affirmation of an intensely personal editorial position.

Francesco Petrarca (1304 - 1374), often referred to in English as Petrarch, was an Italian poet and humanist, and one of the greatest figures in the history of Italian literature. He spent his youth in Tuscany and Avignon and at Bologna. He returned to Avignon in 1326 and entered the service of Cardinal Colonna, traveling widely but finding time to write numerous poems. At Avignon in 1327 Petrarch first saw Laura, who was to inspire his great vernacular love lyrics. His verse won growing fame, and in 1341 he was crowned laureate at Rome. Petrarch's friendship with the republican Cola di Rienzi inspired the famous ode âItalia miaâ. In 1348 both Laura and Cardinal Colonna died of plague, and in the following years Petrarch devoted himself to the cause of Italian unification, pleaded for the return of the papacy to Rome, and served the Visconti of Milan. In his last years Petrarch enjoyed great fame, and even after his death and ceremonial burial at ArquÃ¶ his influence continued to spread.

One of the greatest humanists, Petrarca was among the first to realize that Platonic thought and Greek studies provided a new cultural framework, and he helped to spread this Renaissance point of view through his critique of scholasticism and through his wide correspondence and personal influence. His discovery of Latin manuscripts also furthered the new learning. Yet in his poetry he ignored medieval courtly conventions aiming to express true emotions. In his portrait of Laura he went beyond the medieval paradigm of woman as a spiritual symbol creating the image of a real woman. Petrarch perfected the sonnet form and is considered by many to be the first modern poet.

In spite of the magnitude of Petrarch's composition in Latin, his abiding fame rests upon his Italian verse, and this forms two notable compilations, the "Trionfi" and the "Canzoniere". The "Trionfi", written in terza rima, and making large use of the vision already put to so good stead by Dante, is allegorical and moral in its nature. In the "Trionfi" we have a triumphal procession in which there take part six leading allegorical figures: Love, Chastity, Death, Fame, Time, and Divinity. Chastity triumphs over its predecessor, and finally Divinity triumphs over them all and remains supreme, as the symbol of peace, eternal life, and the everlasting union of the poet with his beloved Laura.

The Canzoniere, the poet's masterpiece, and one of the imperishable monuments of the world's literature, was first put into shape by the author and made known by him under the title of "Rerum vulgarium fragmenta". It consists of sonnets (and these are the more numerous) of canzoni, of sestine, of ballate, and of madrigals. The love motive prevails in the majority of these, but political and patriotic feeling regulates some of the most famous of them, and still others are infused with moral and other sentiments. Some lyrics bearing apparent relations to the "Canzoniere", but excluded by the poet from its final make-up, have been published under the title of "Extravaganti". In the strictly amorous part of the Canzoniere, Petrarch sings of his lady [Laura] living and dead, and, reviving in his psychological manner the methods of the earlier dolce stil nuovo School, particularly reflects the spirit of Cino da Pistoia. But all is not imitation on the part of his Muse; his inner man is expressed in even greater degree than the literary formalism which he owed to his predecessors of the thirteenth and the early fourteenth century. The Canzoniere and the Trionfi begot for Petrarch legions of followers in Italy, and Petrarchism, as the imitation of his manner was termed, continued down into the Renaissance.

Alphabetical index of poems at the end of the volume (leaves AA3v-9v). Register and colophon on AA9v; AA10 with blank recto and Aldine device on verso.

Near Fine antiquarian condition. Binding with leather quite fresh and supple, and lustrous gilt; joints very lightly rubbed, but intact and solid. Interior with occasional minor soiling (a bit more to the title-page) and some very minor spotting. In all, a clean bright, solid, well-margined example of this elegant and rare Aldine edition. 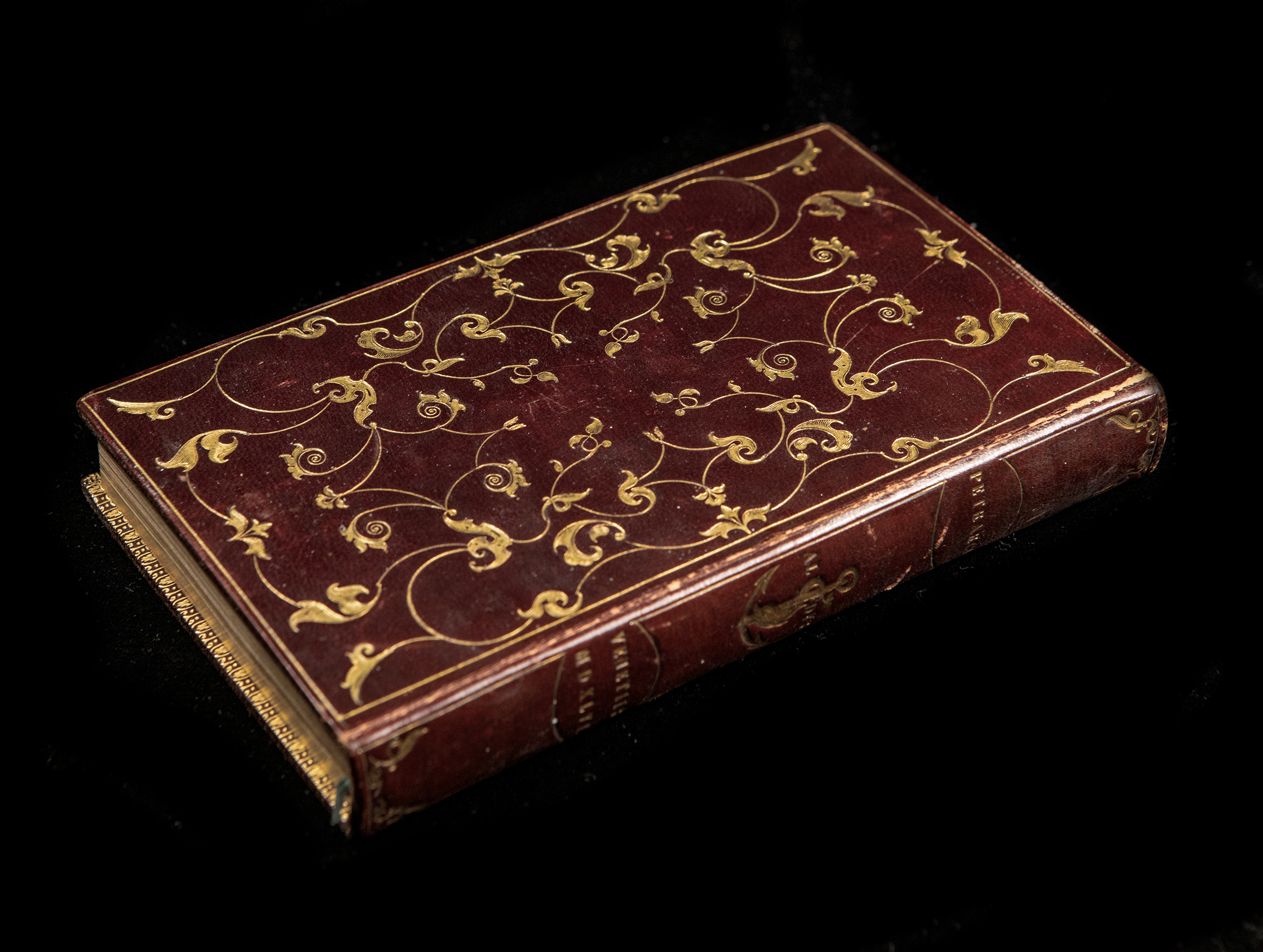 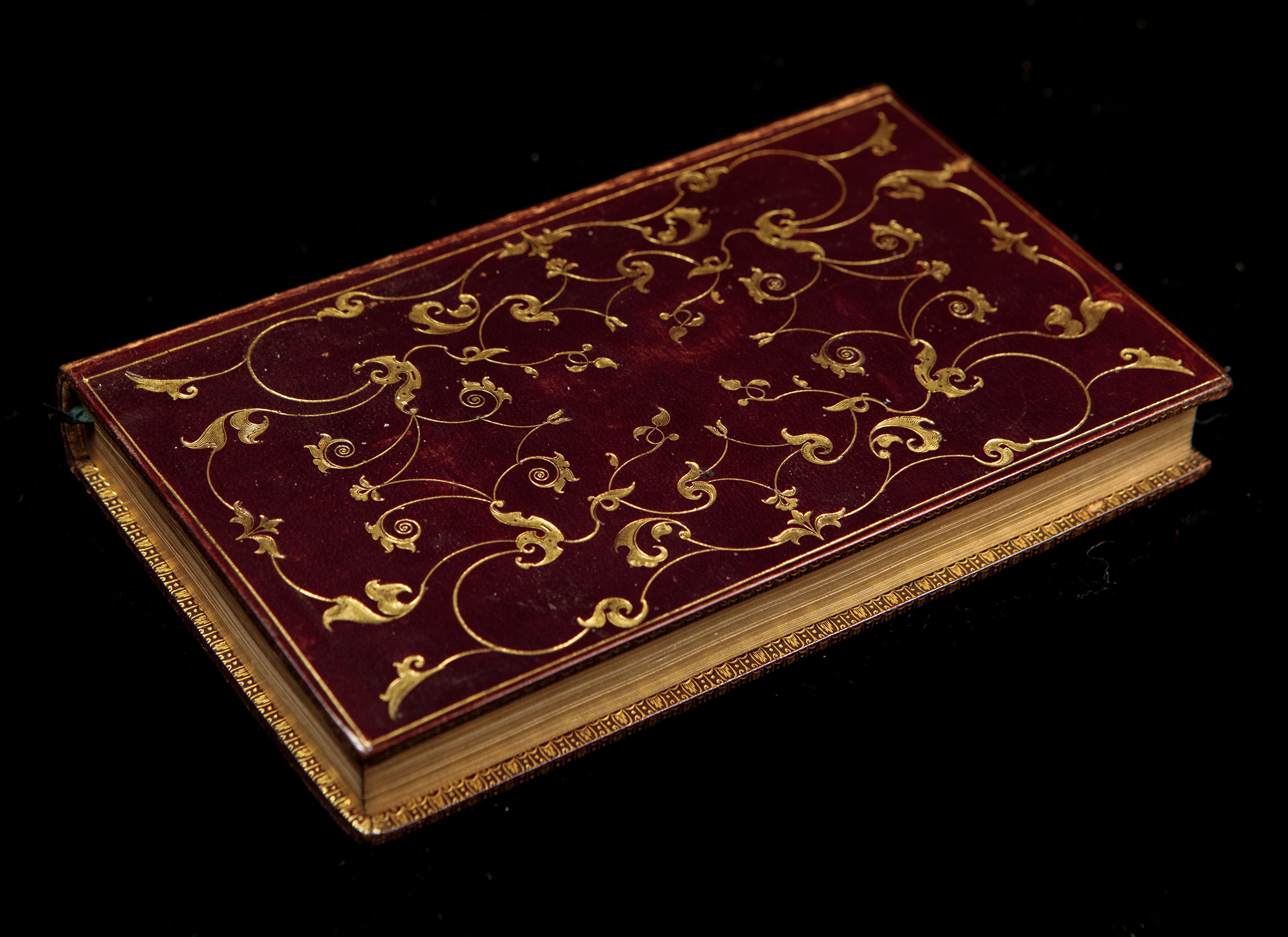 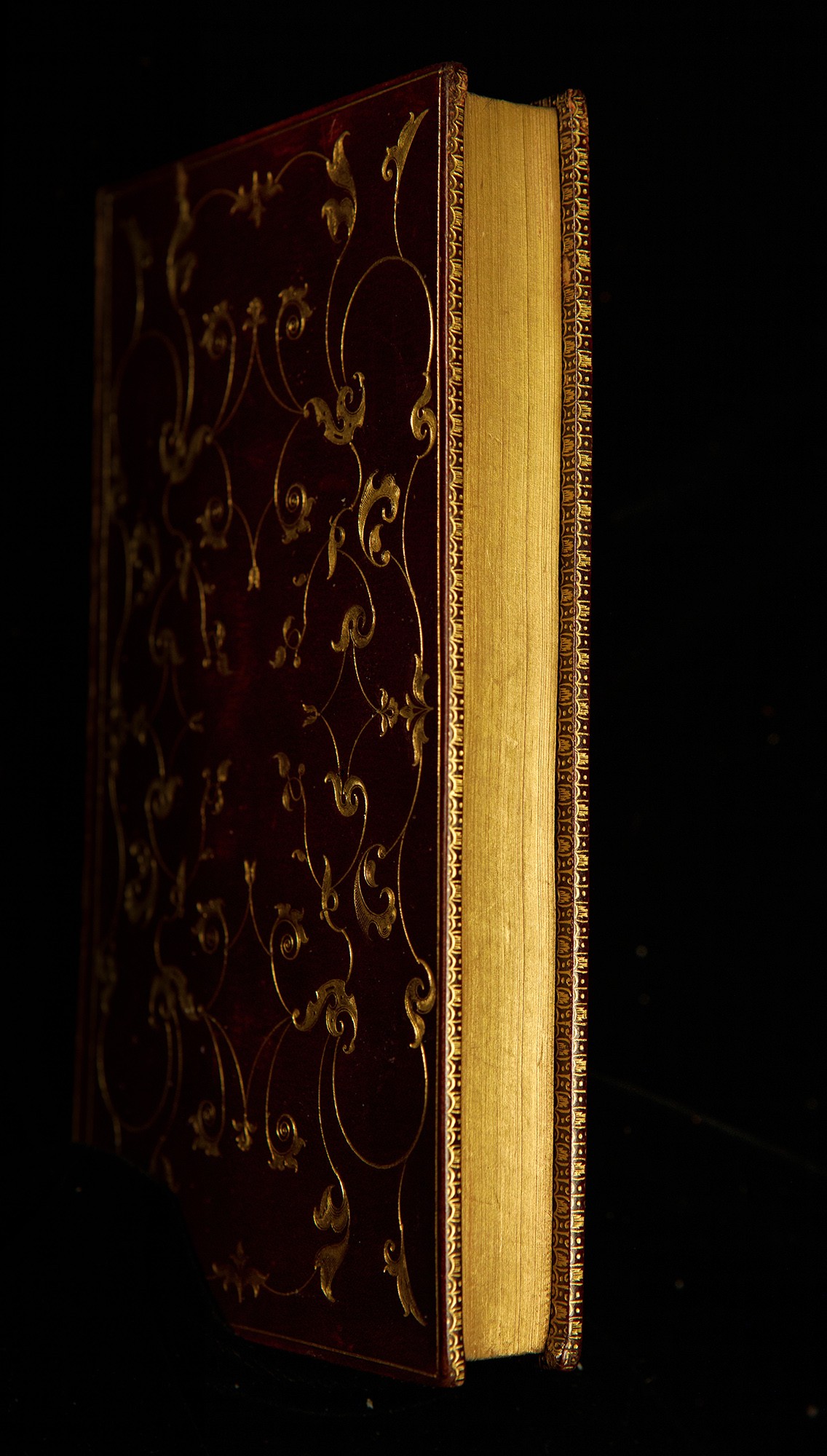 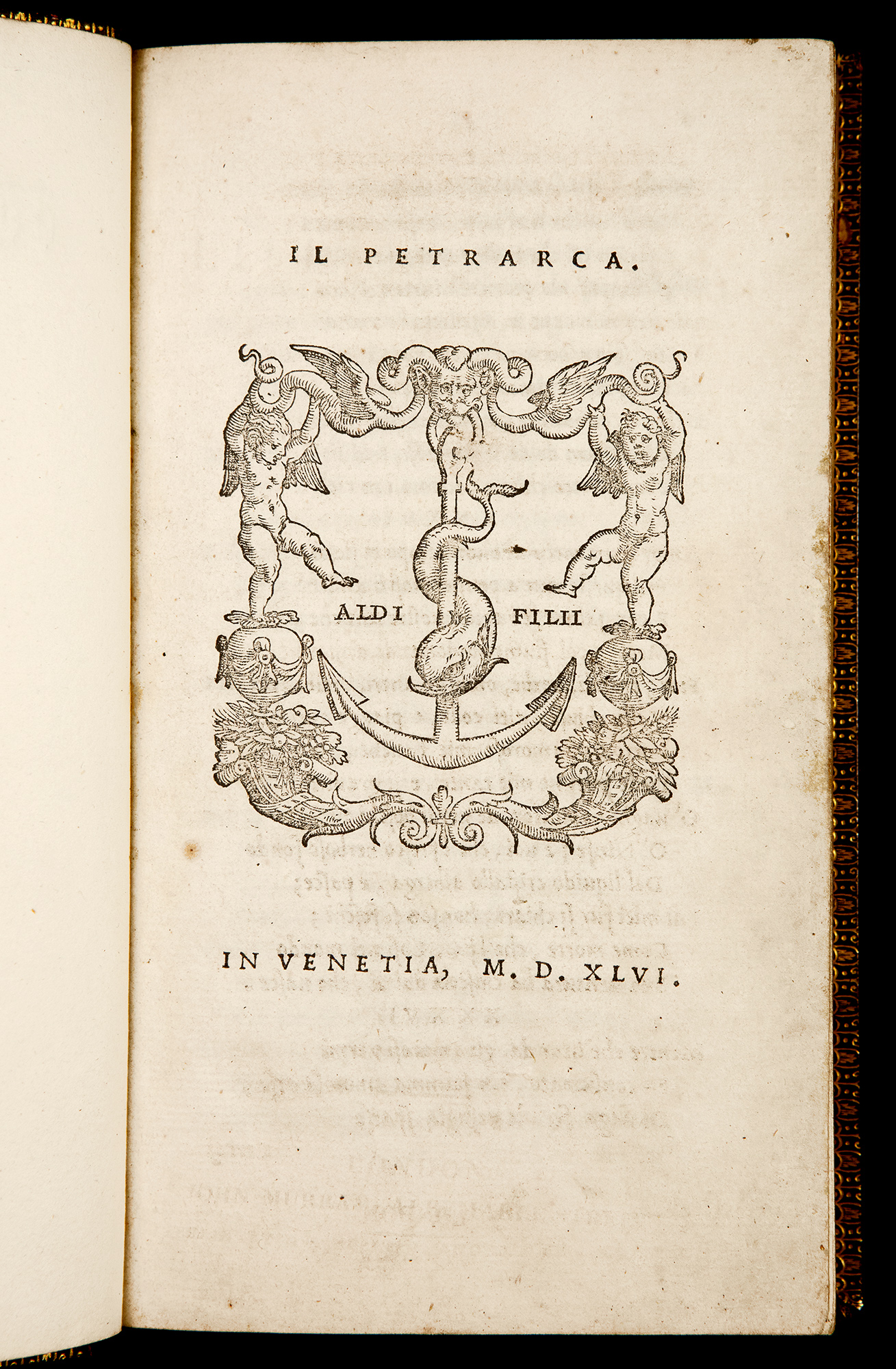 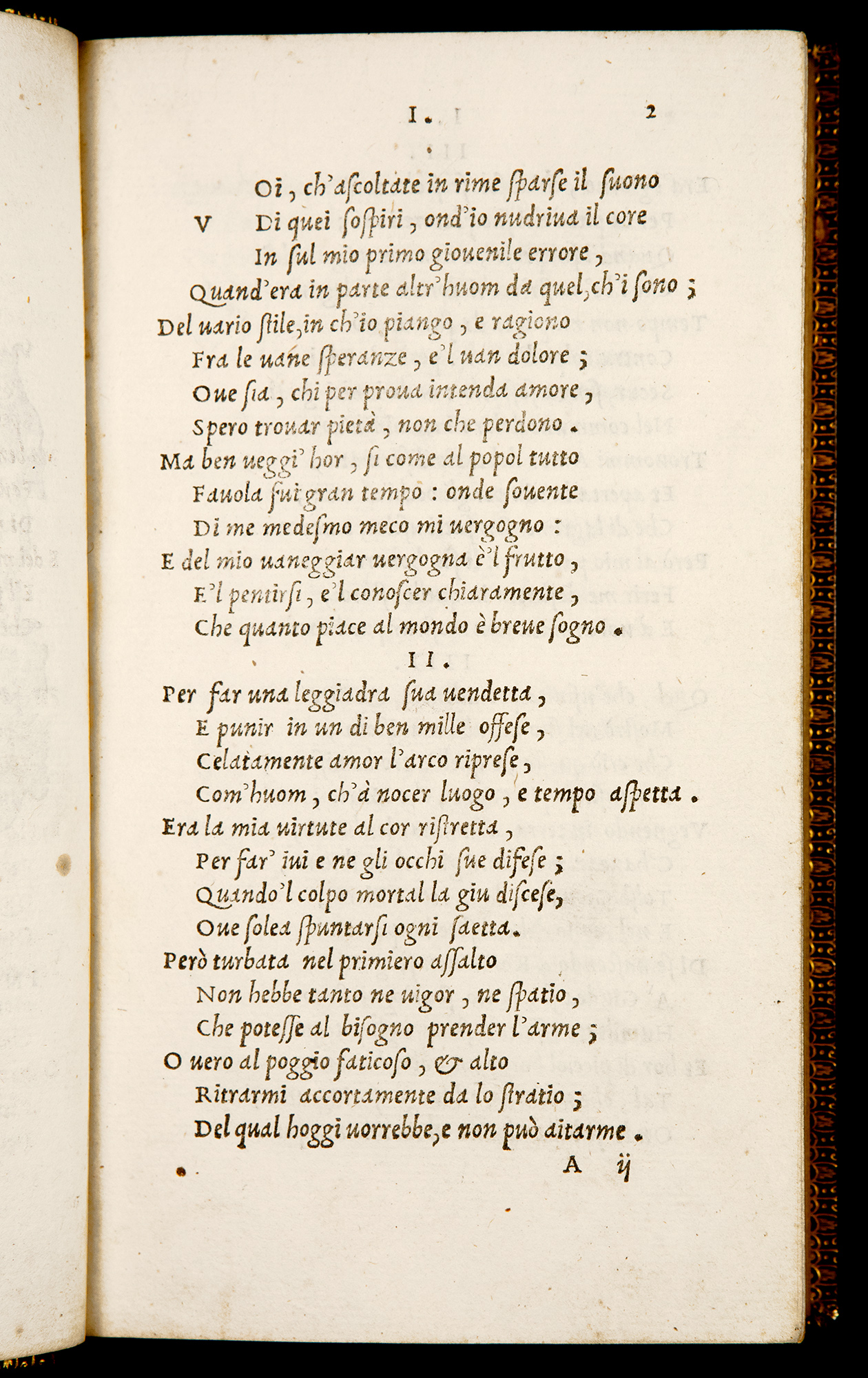 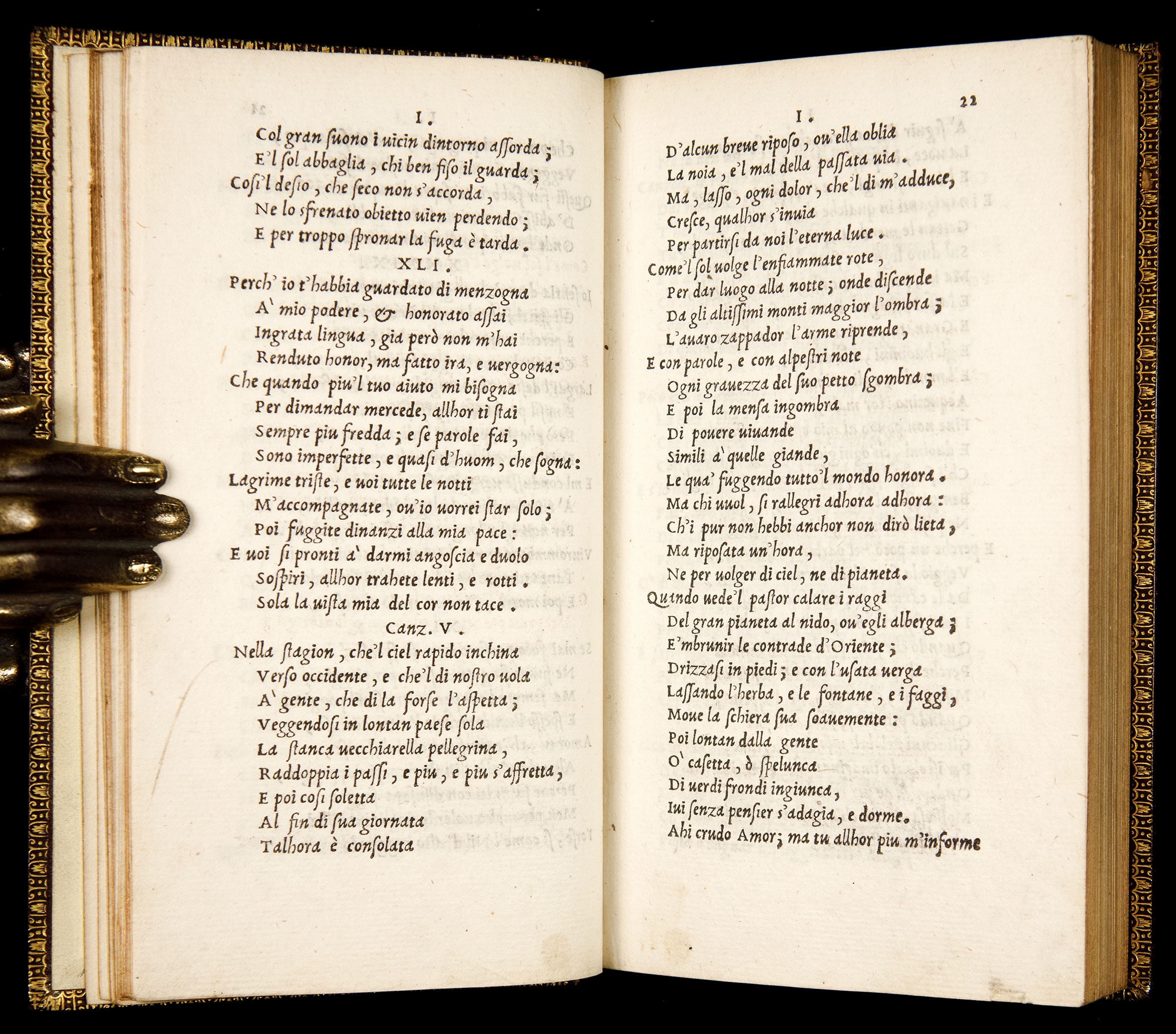 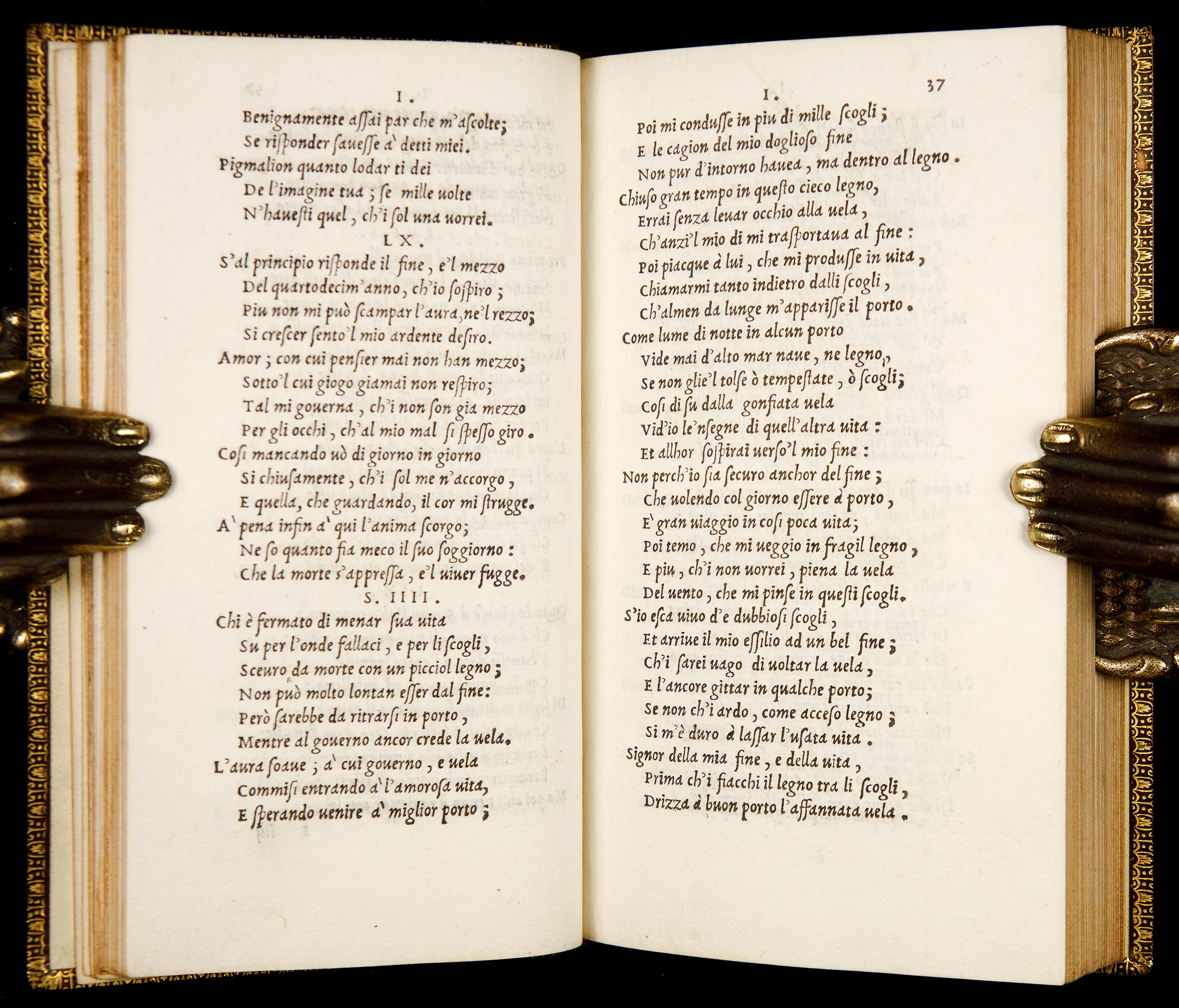 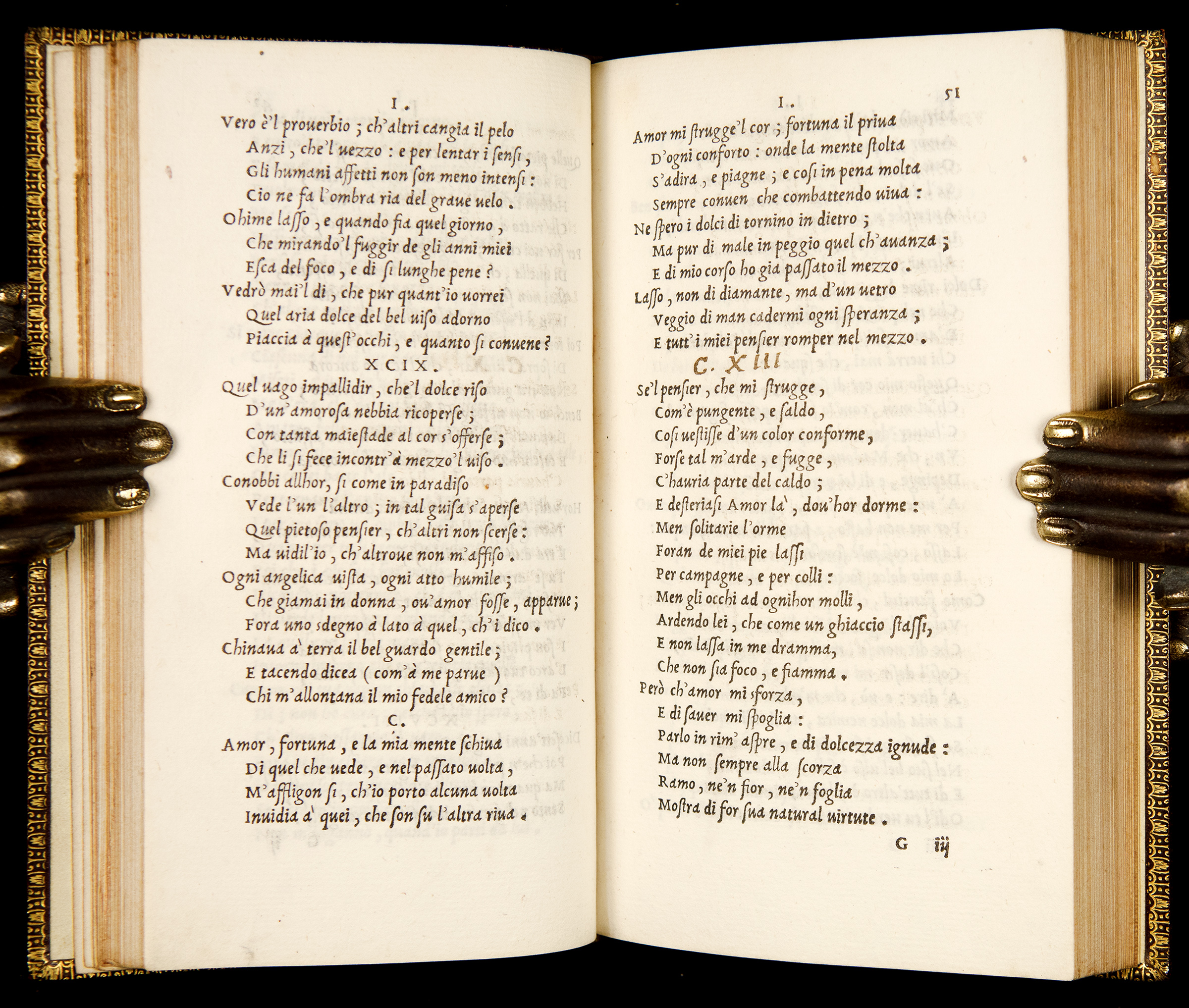 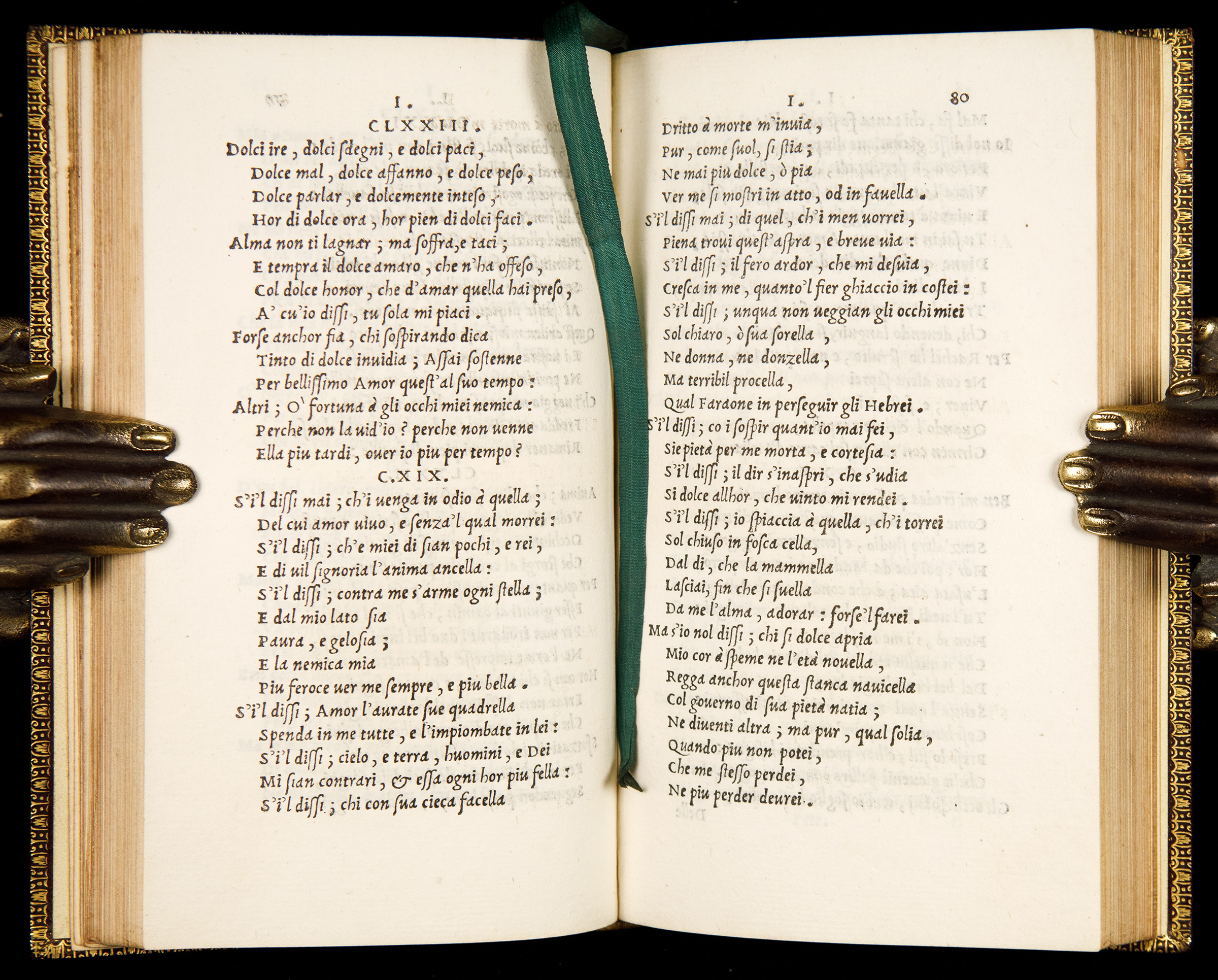 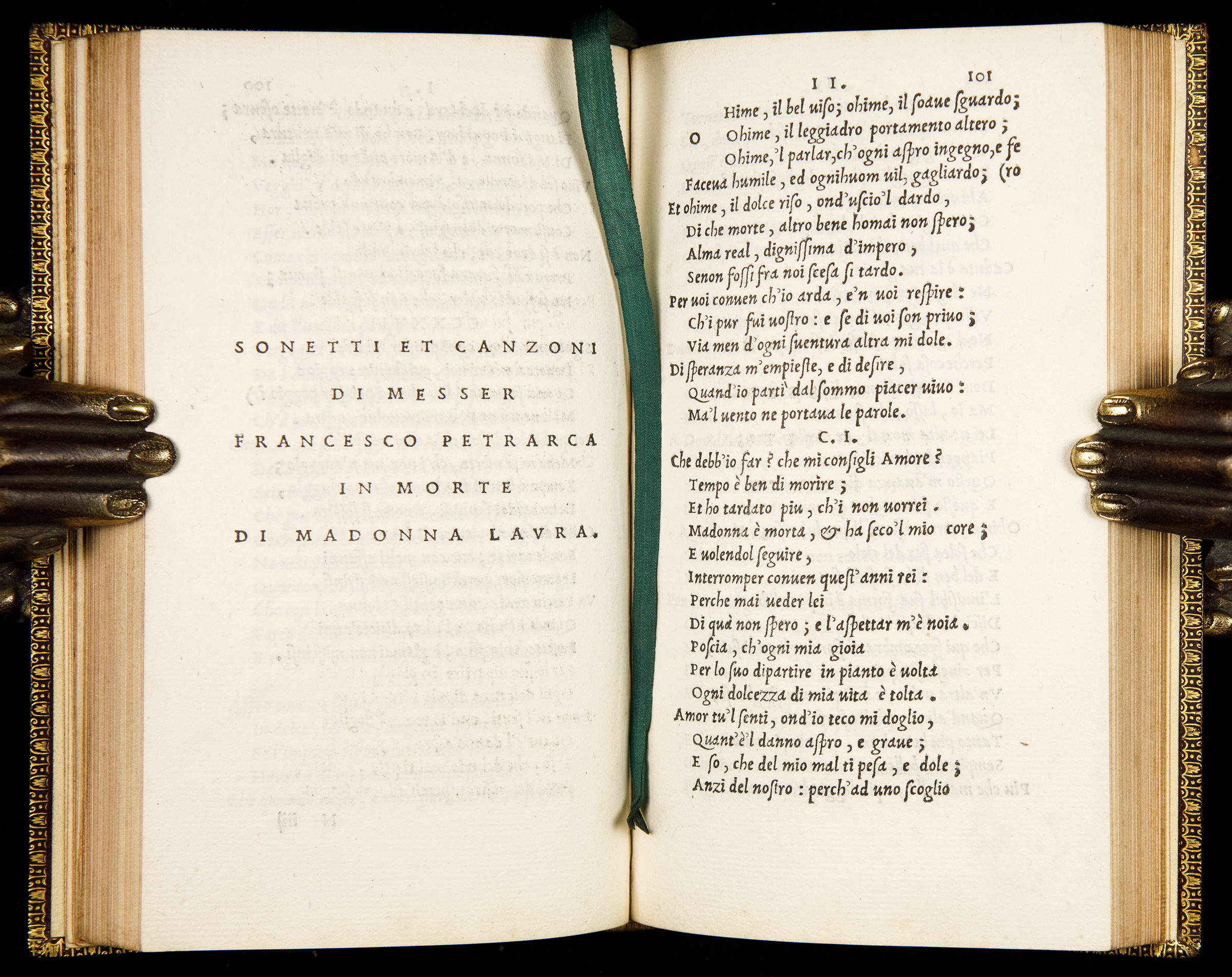 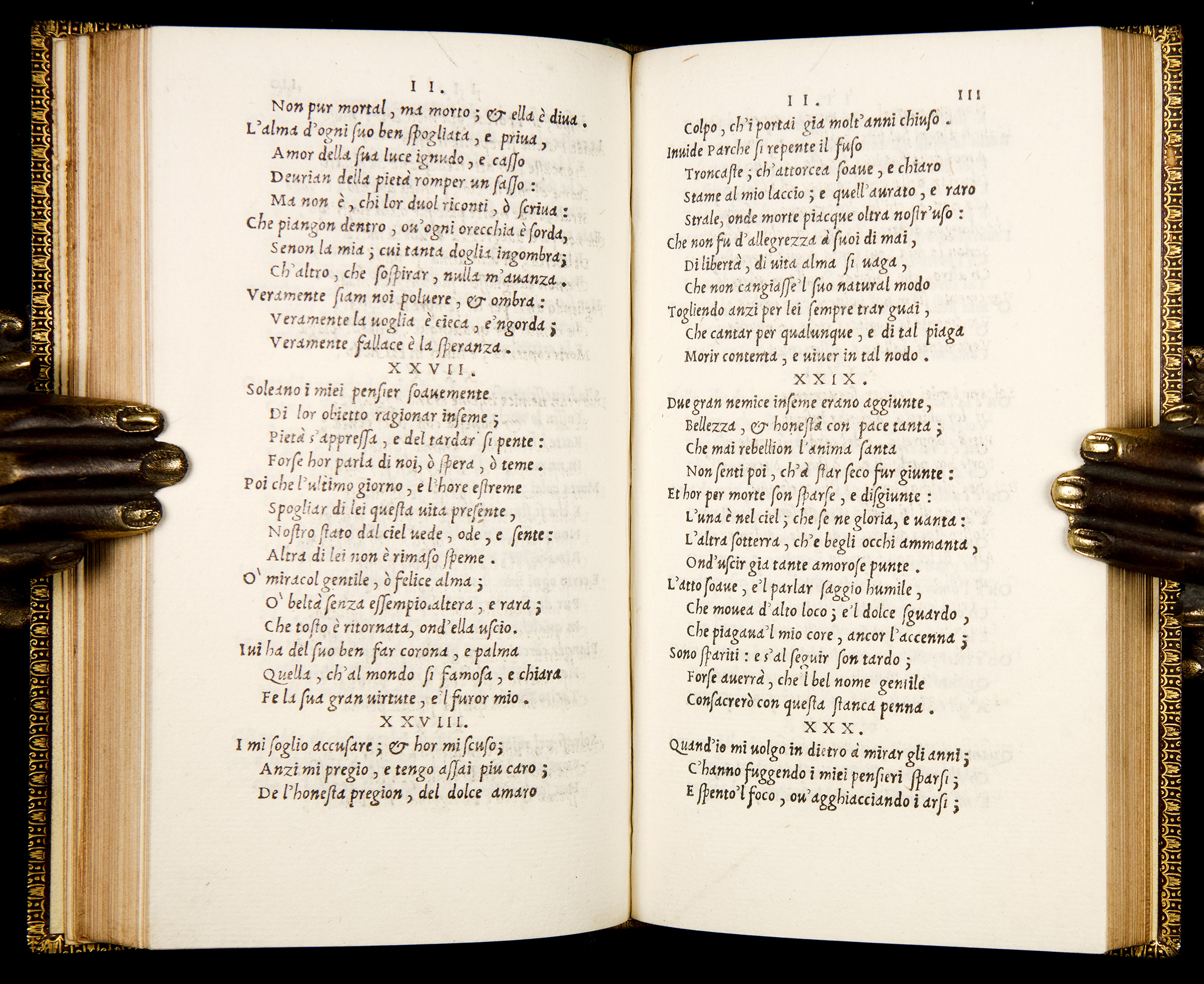 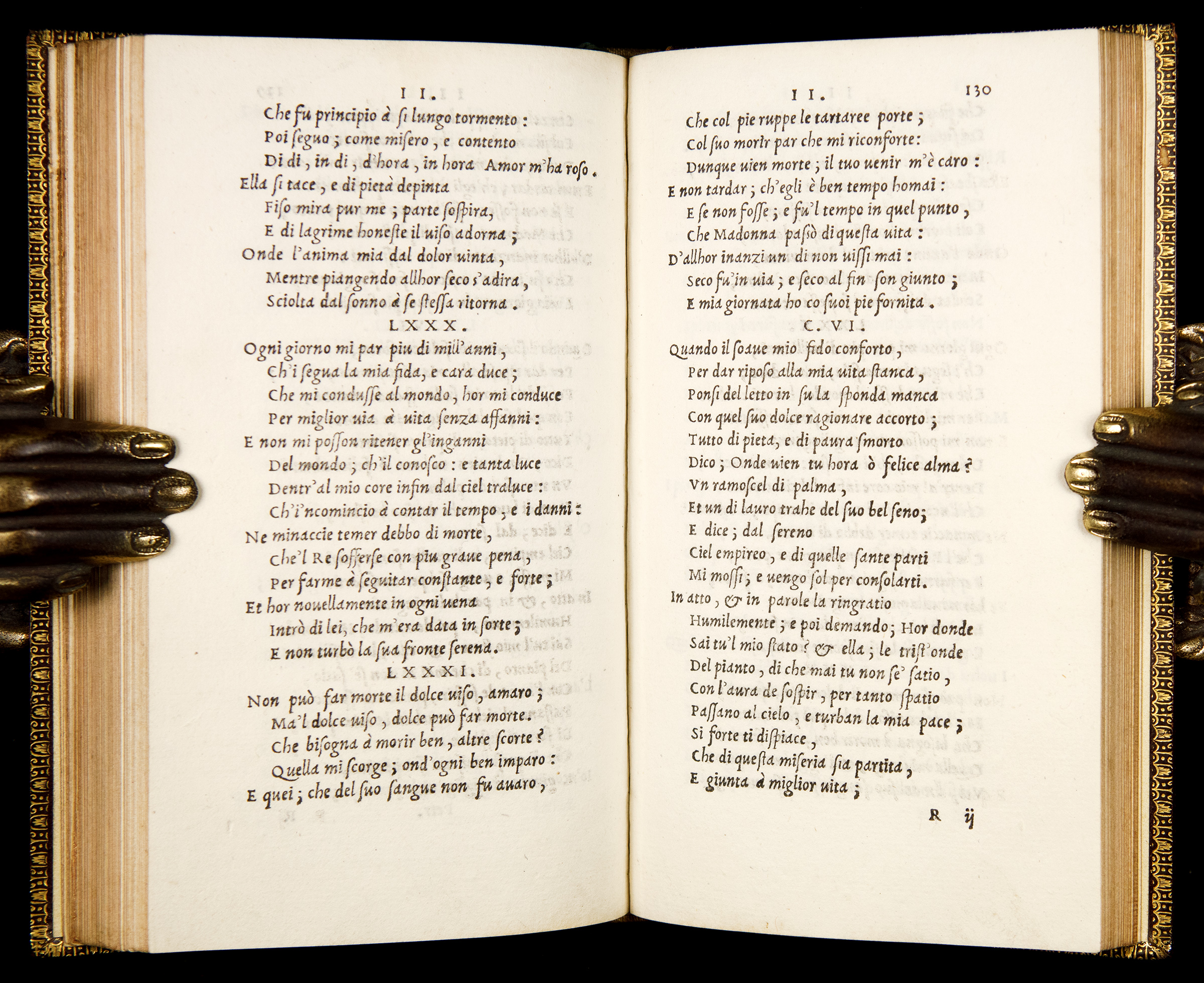 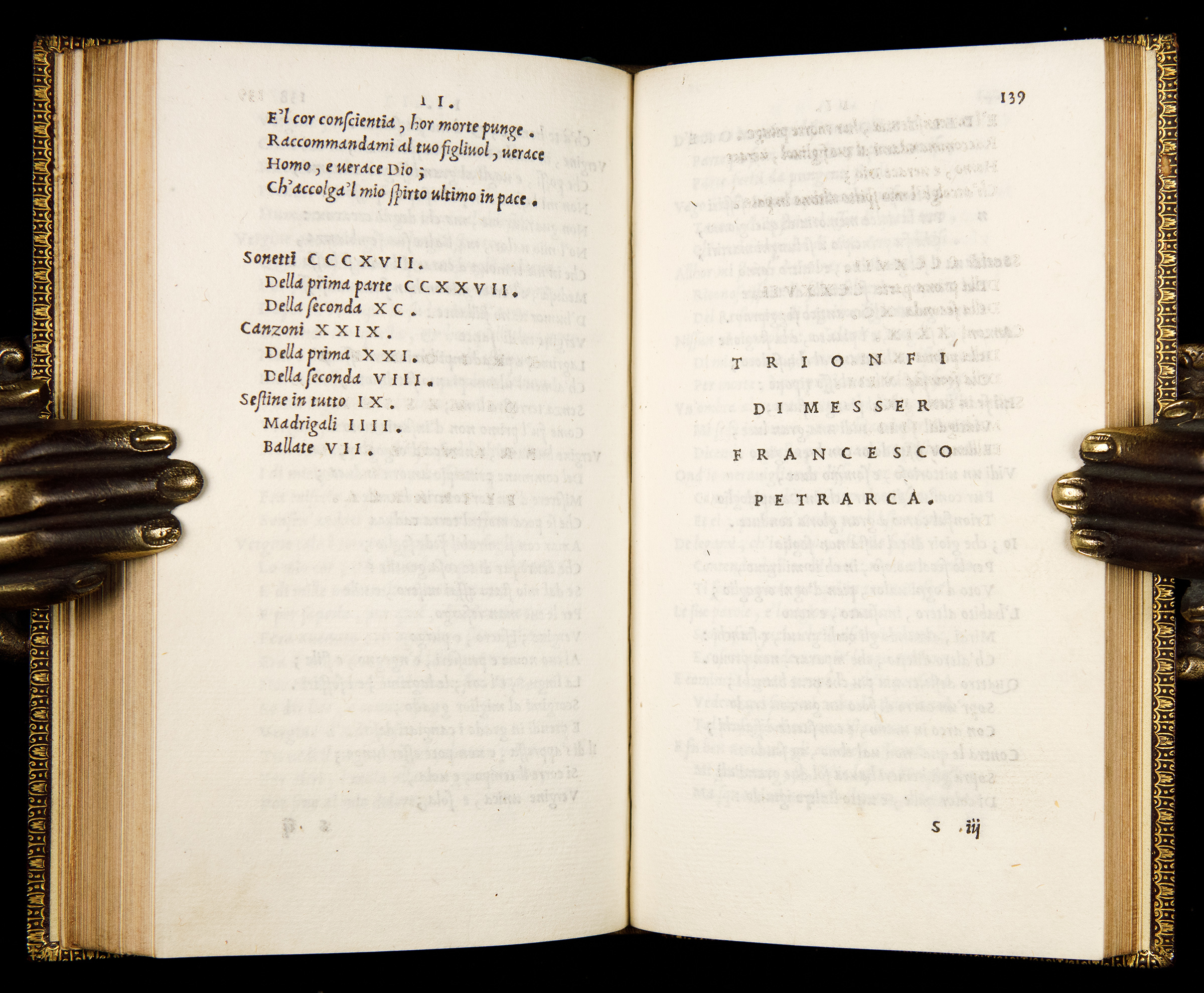 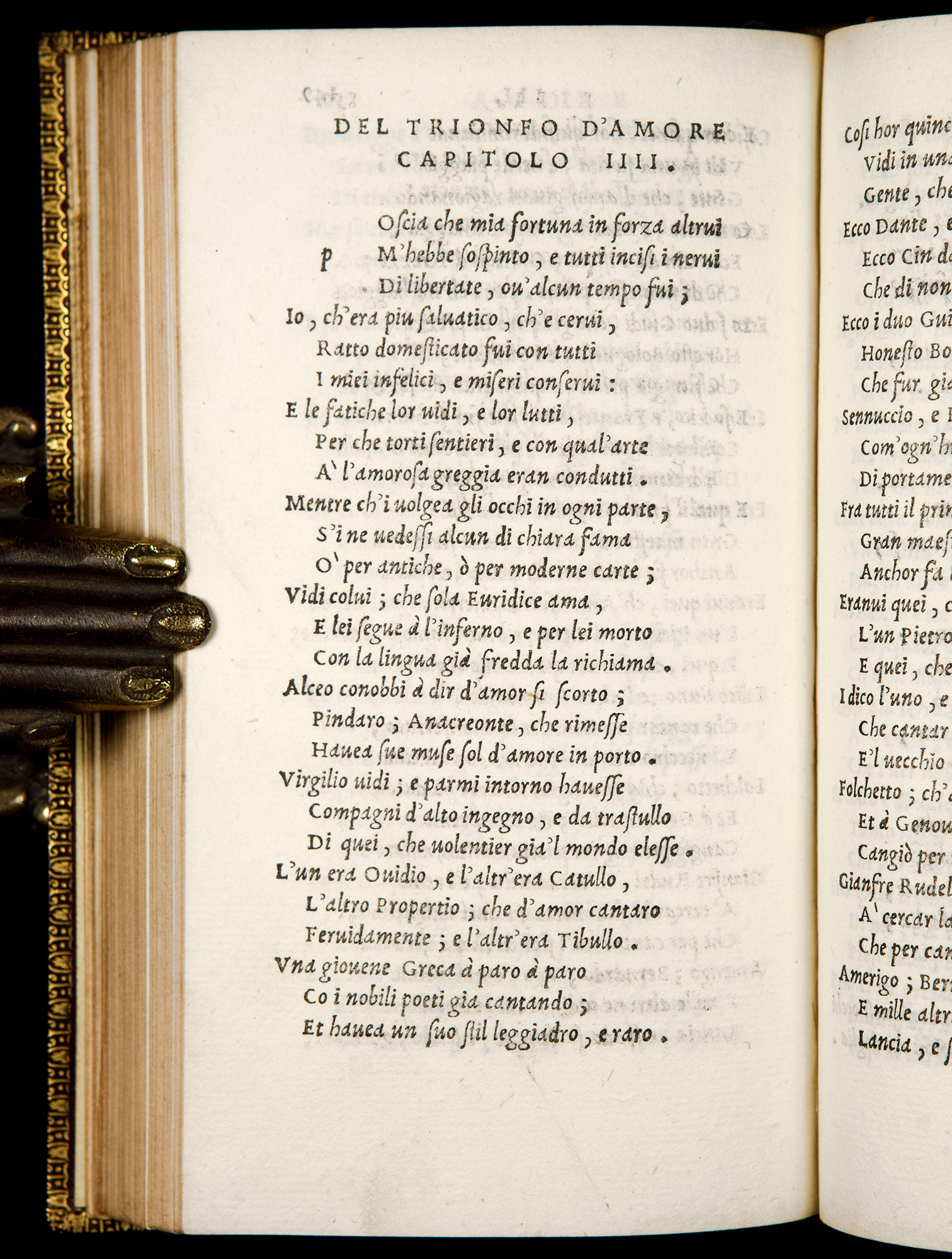 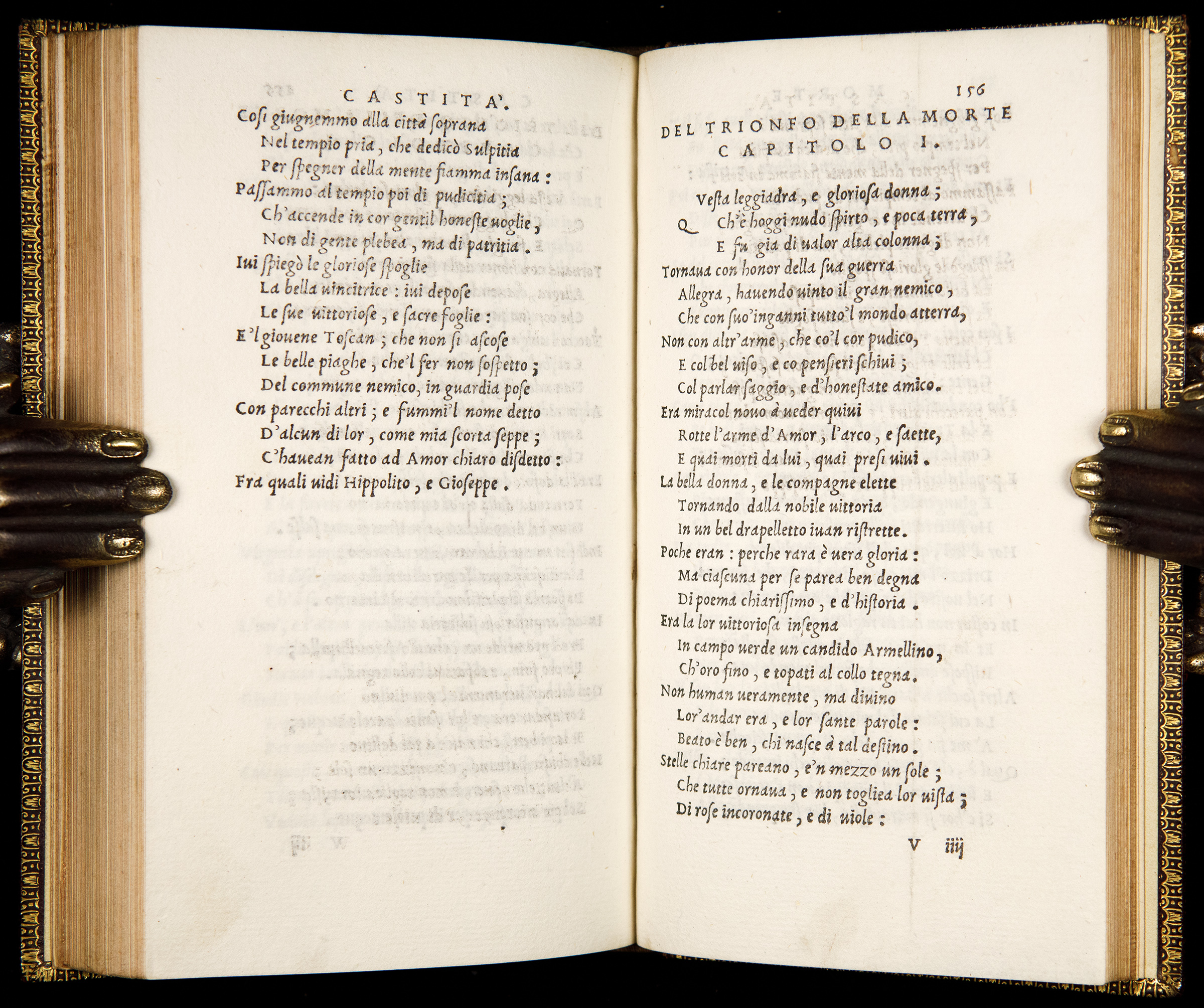 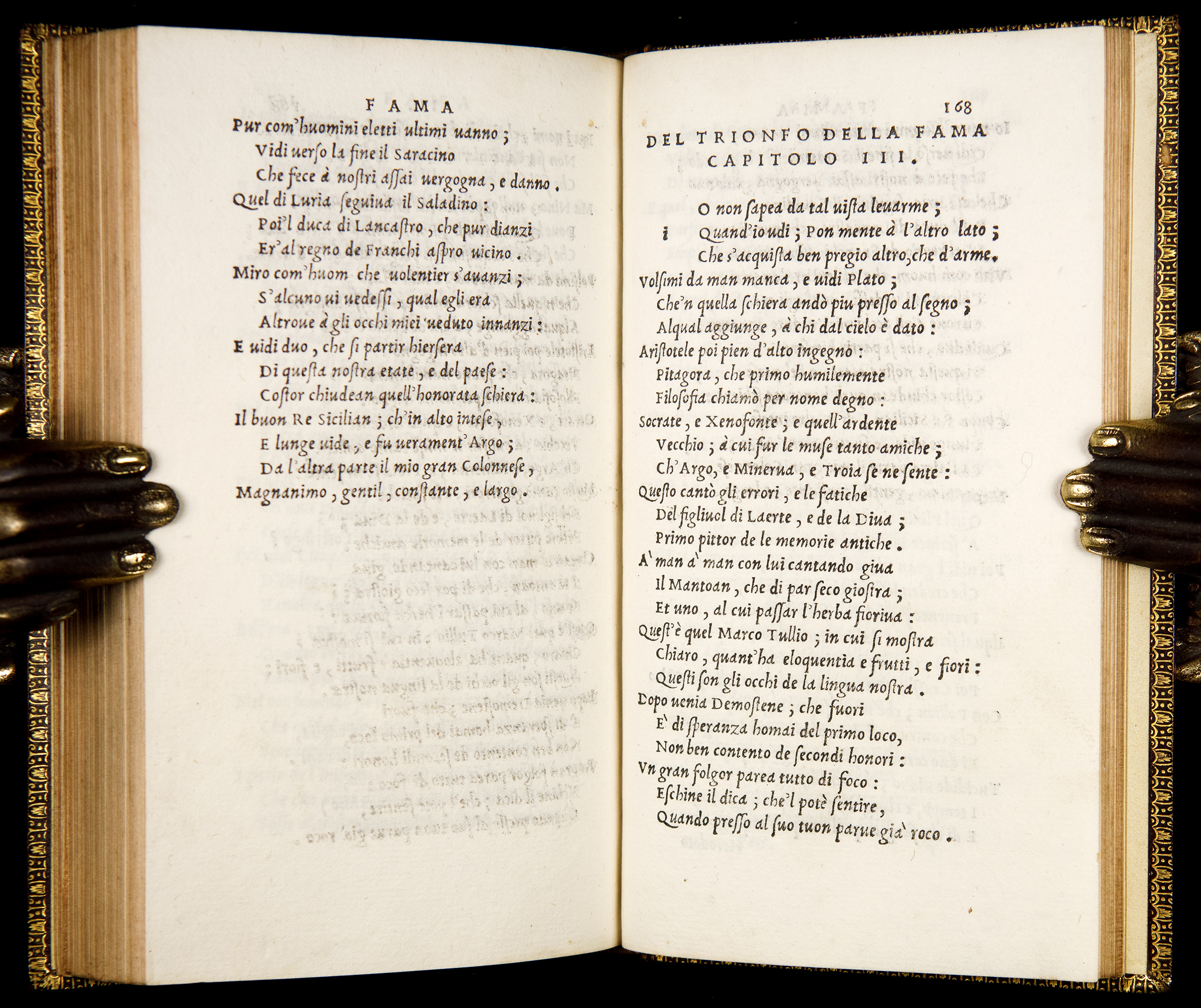 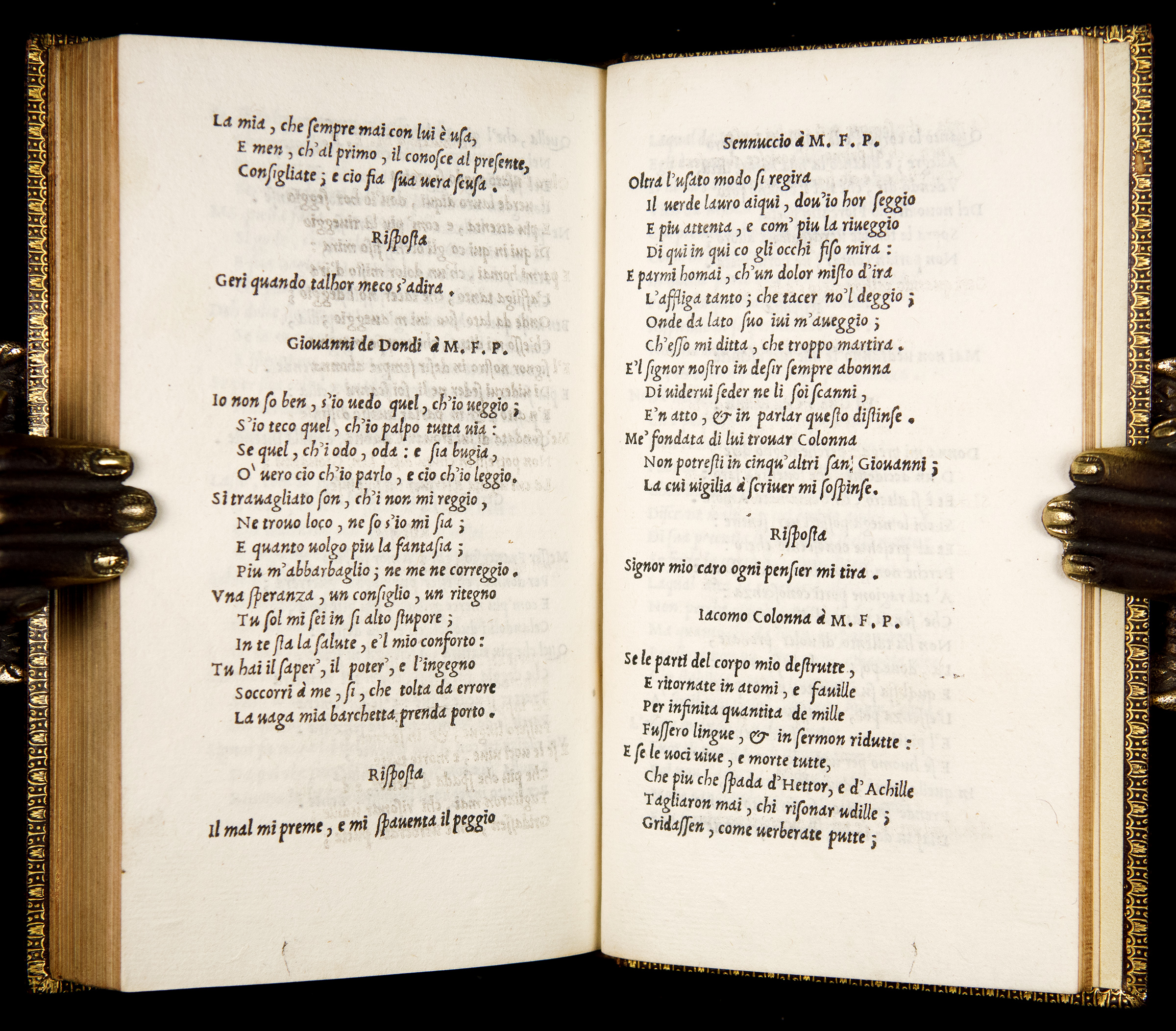 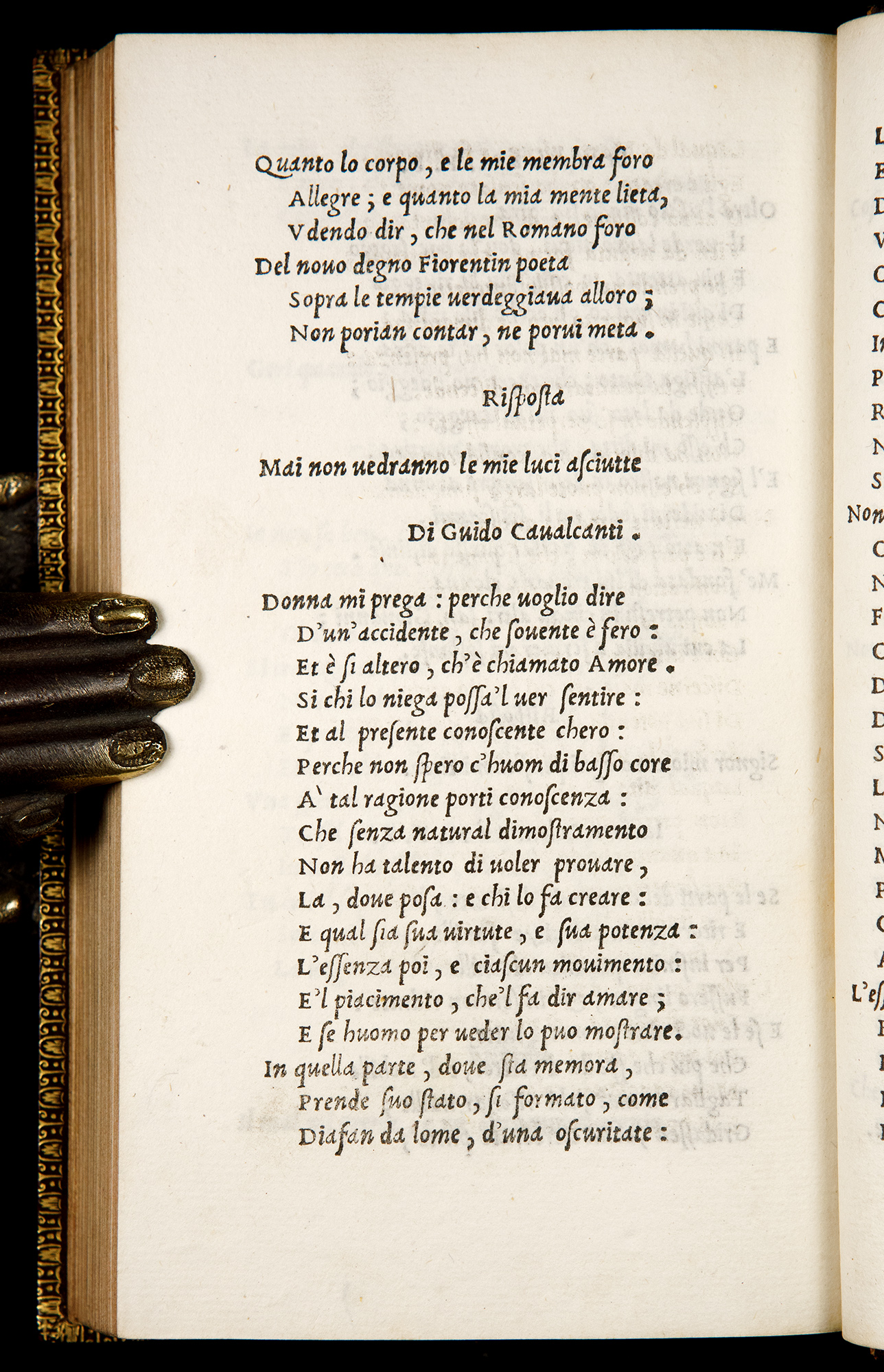 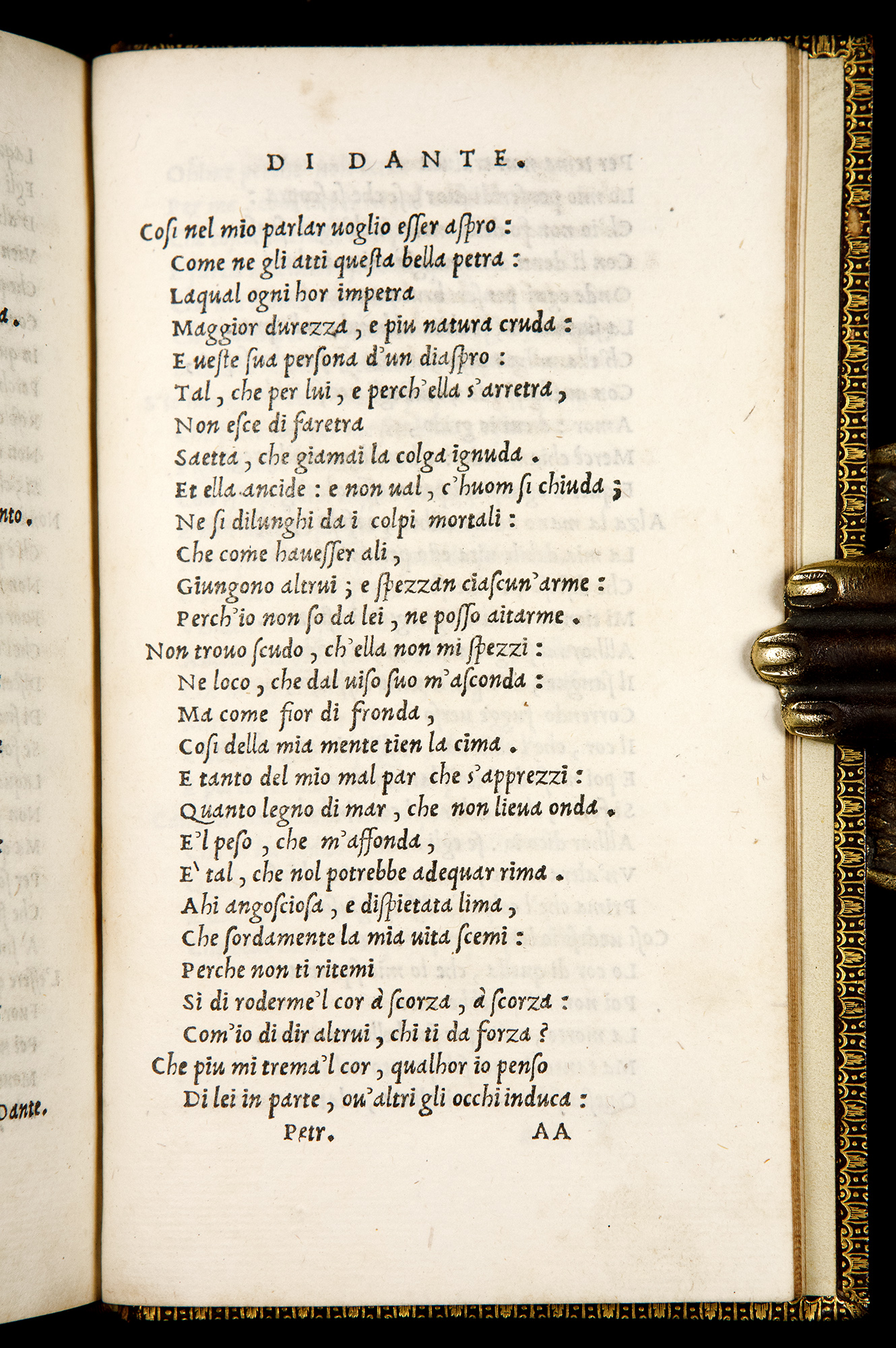 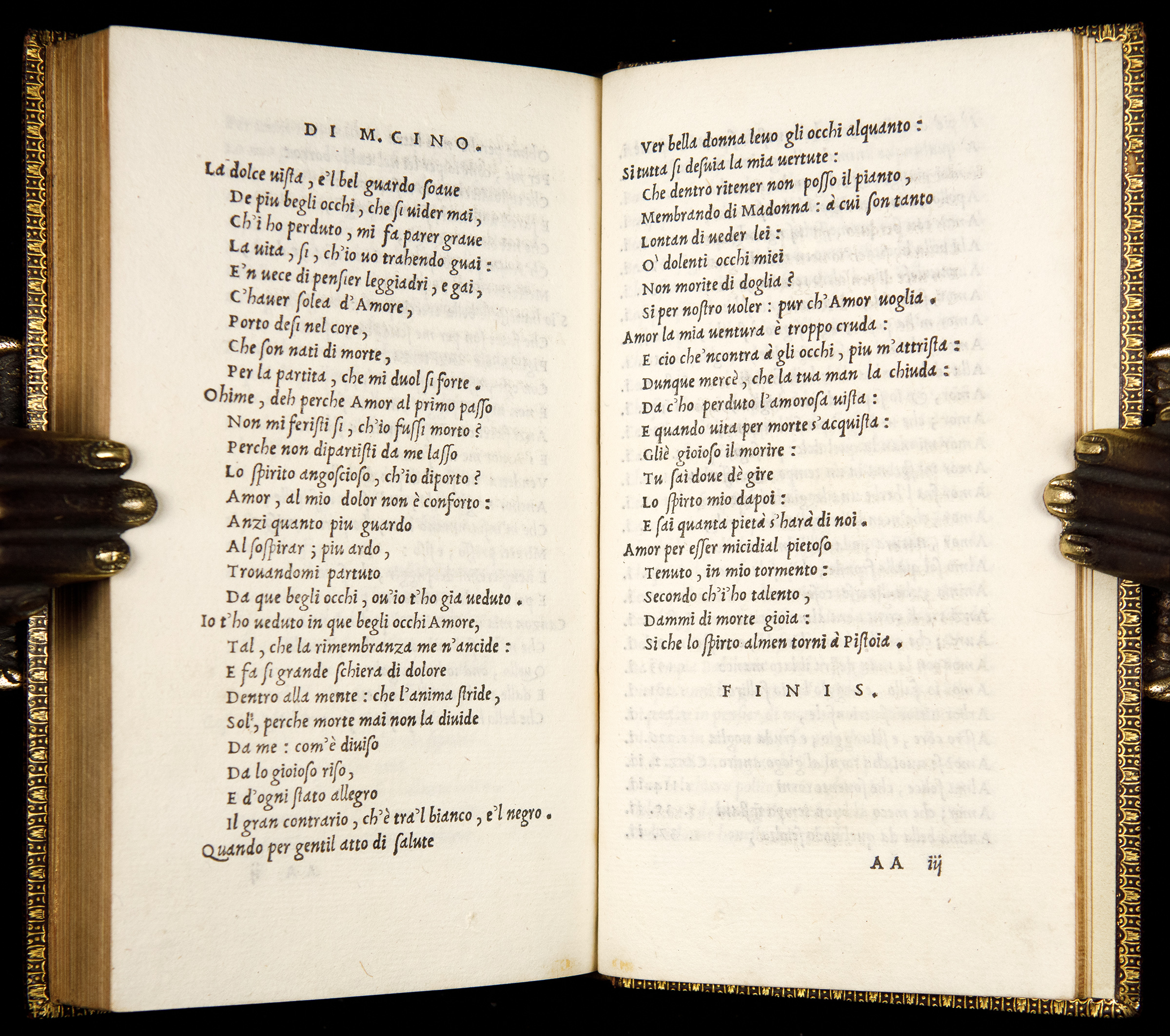 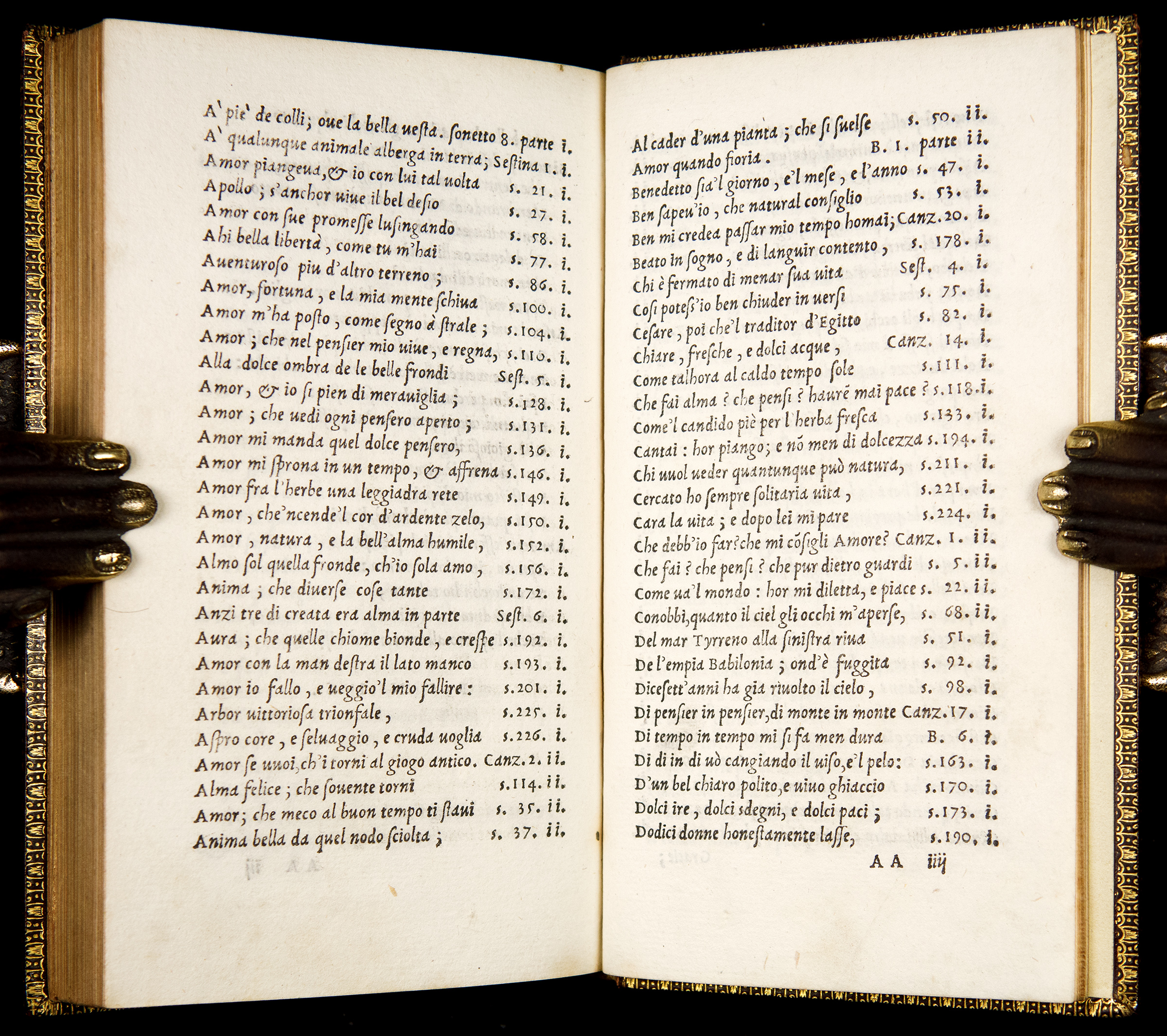 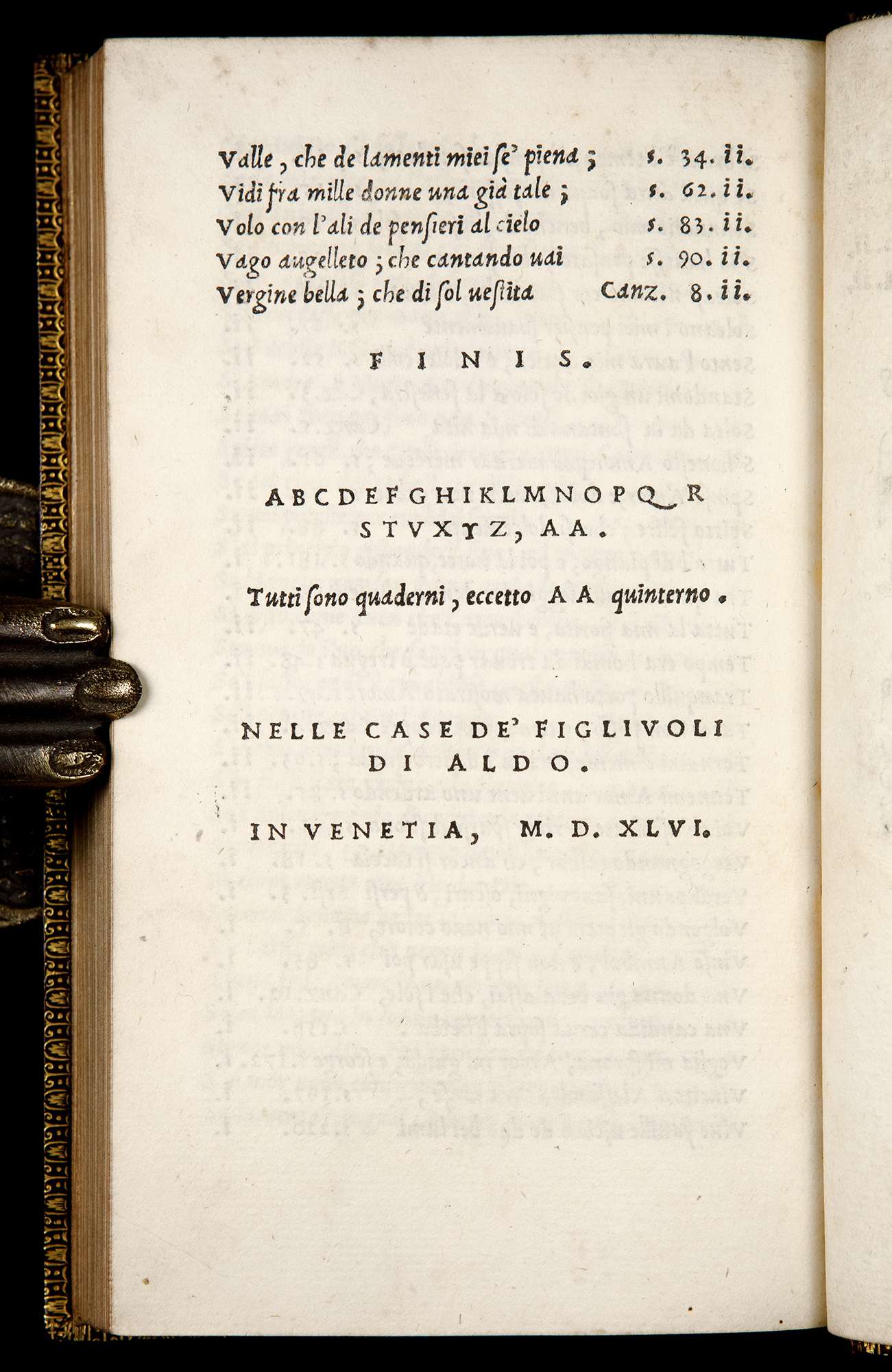 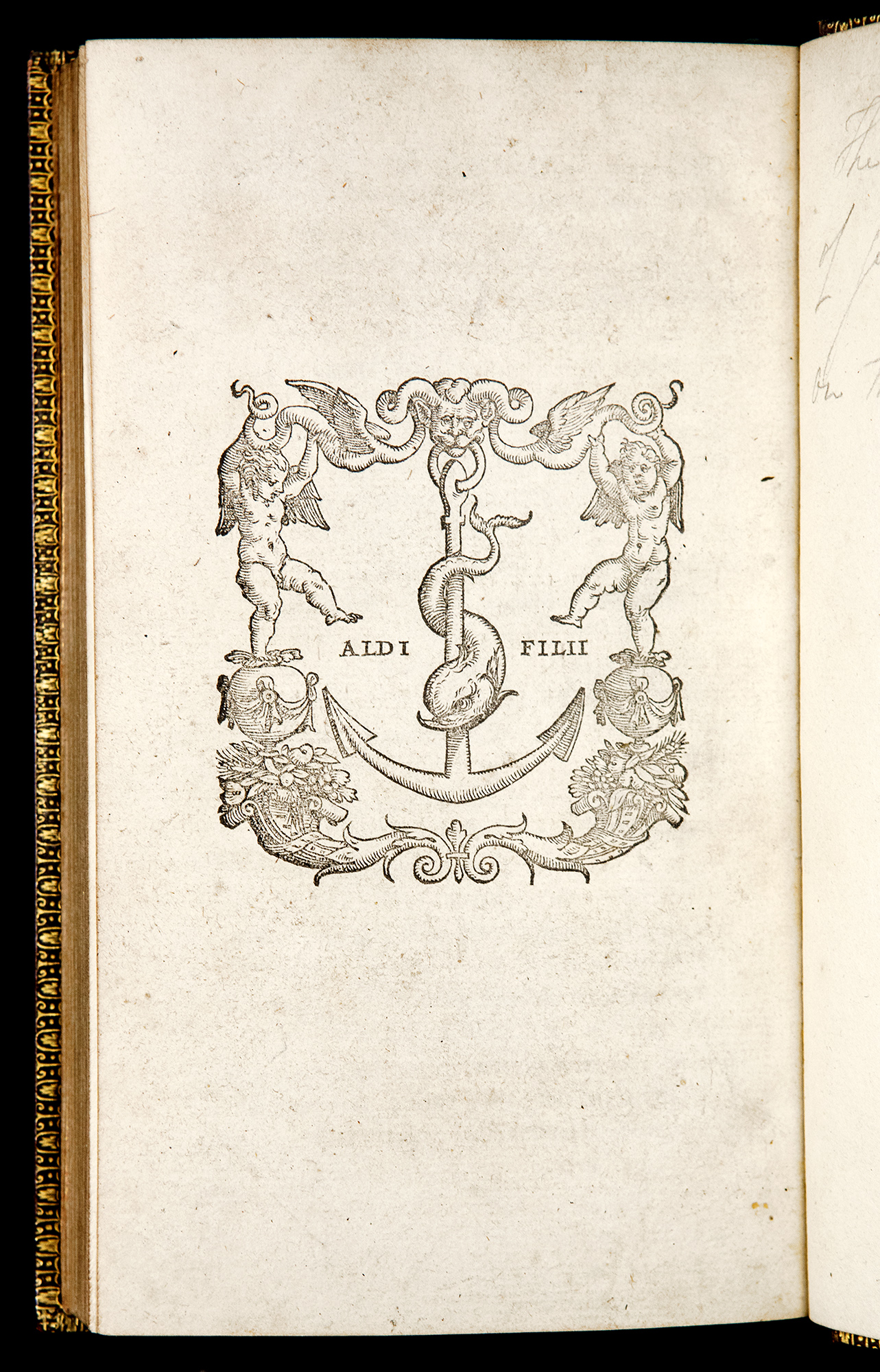 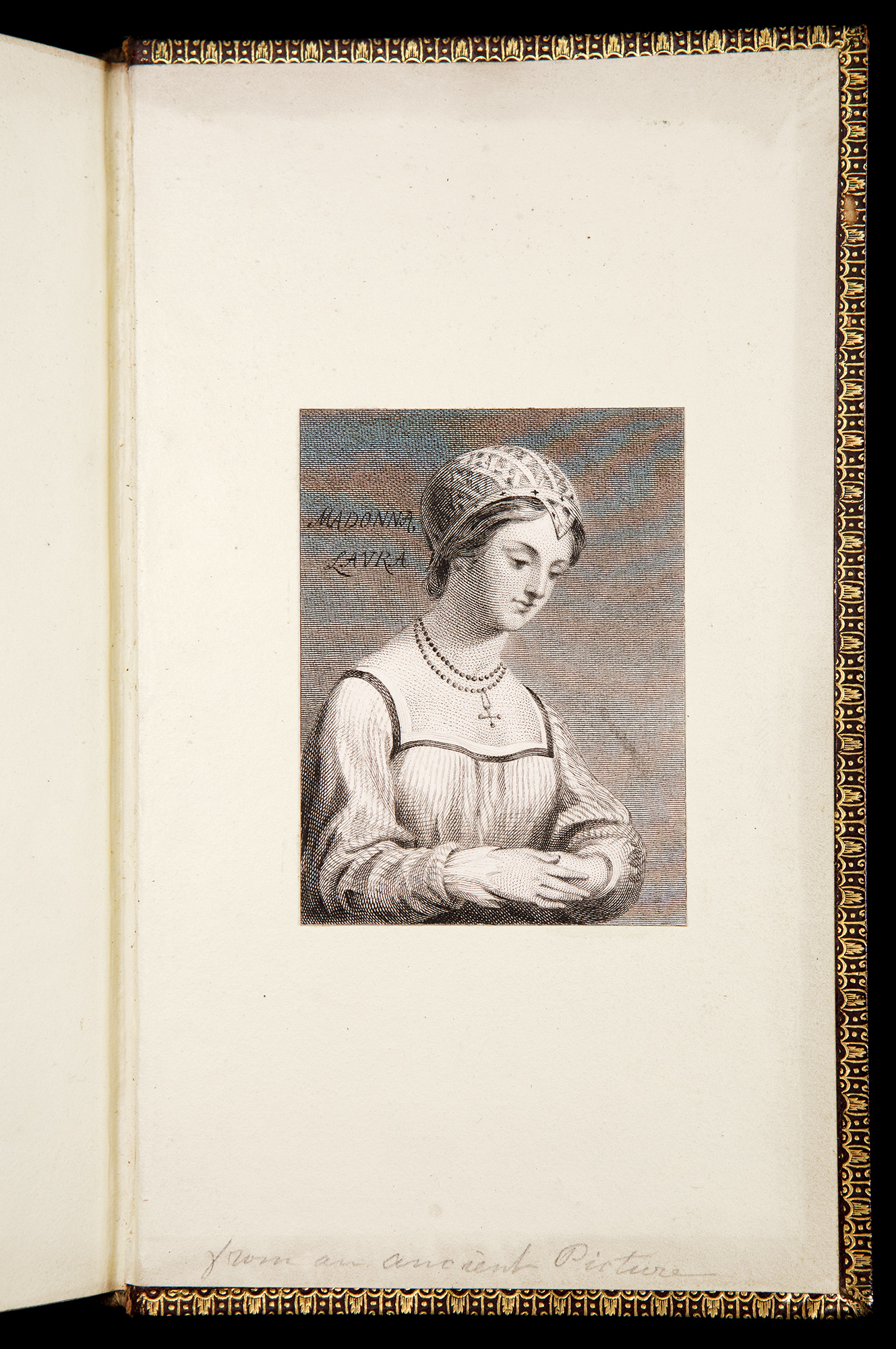 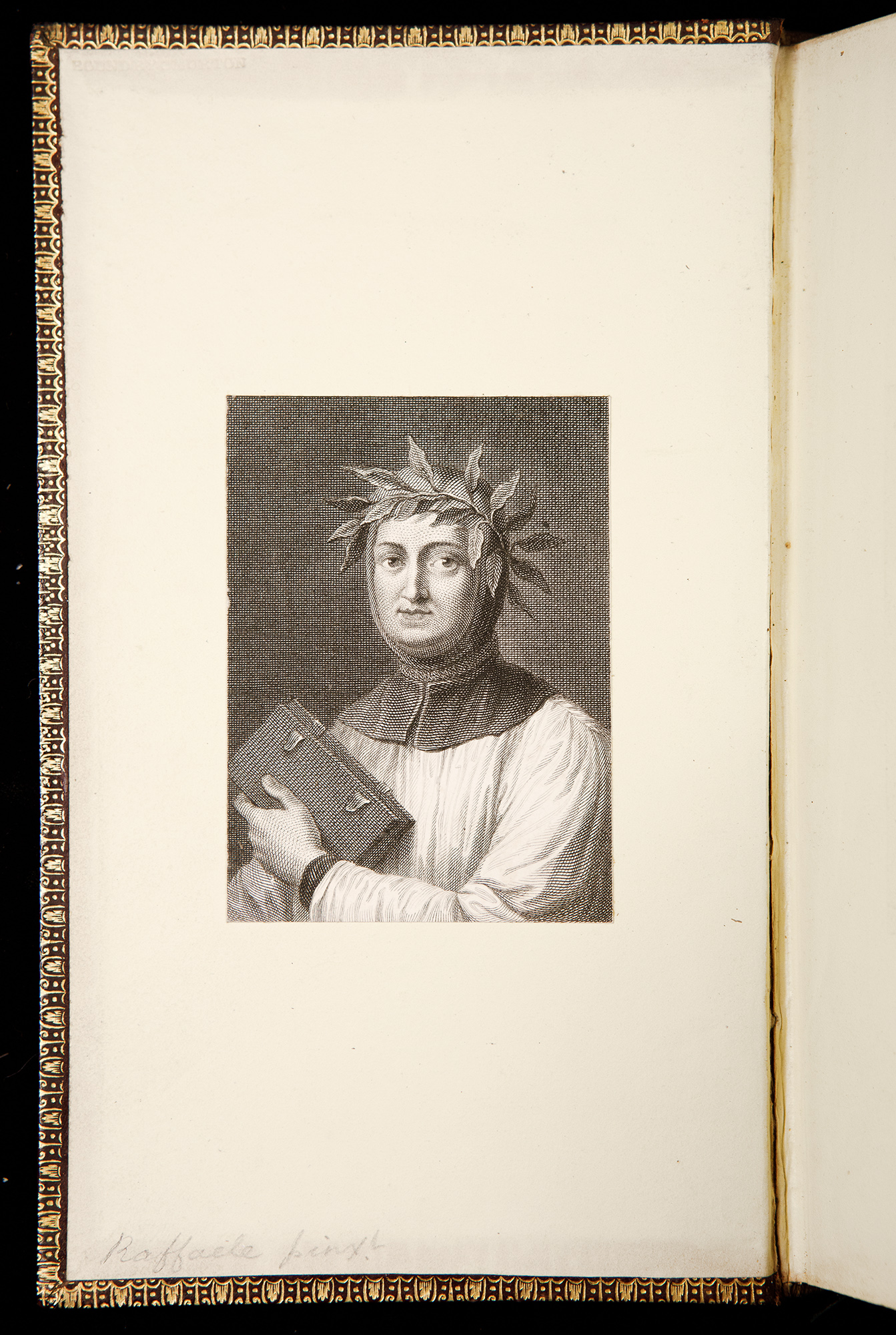