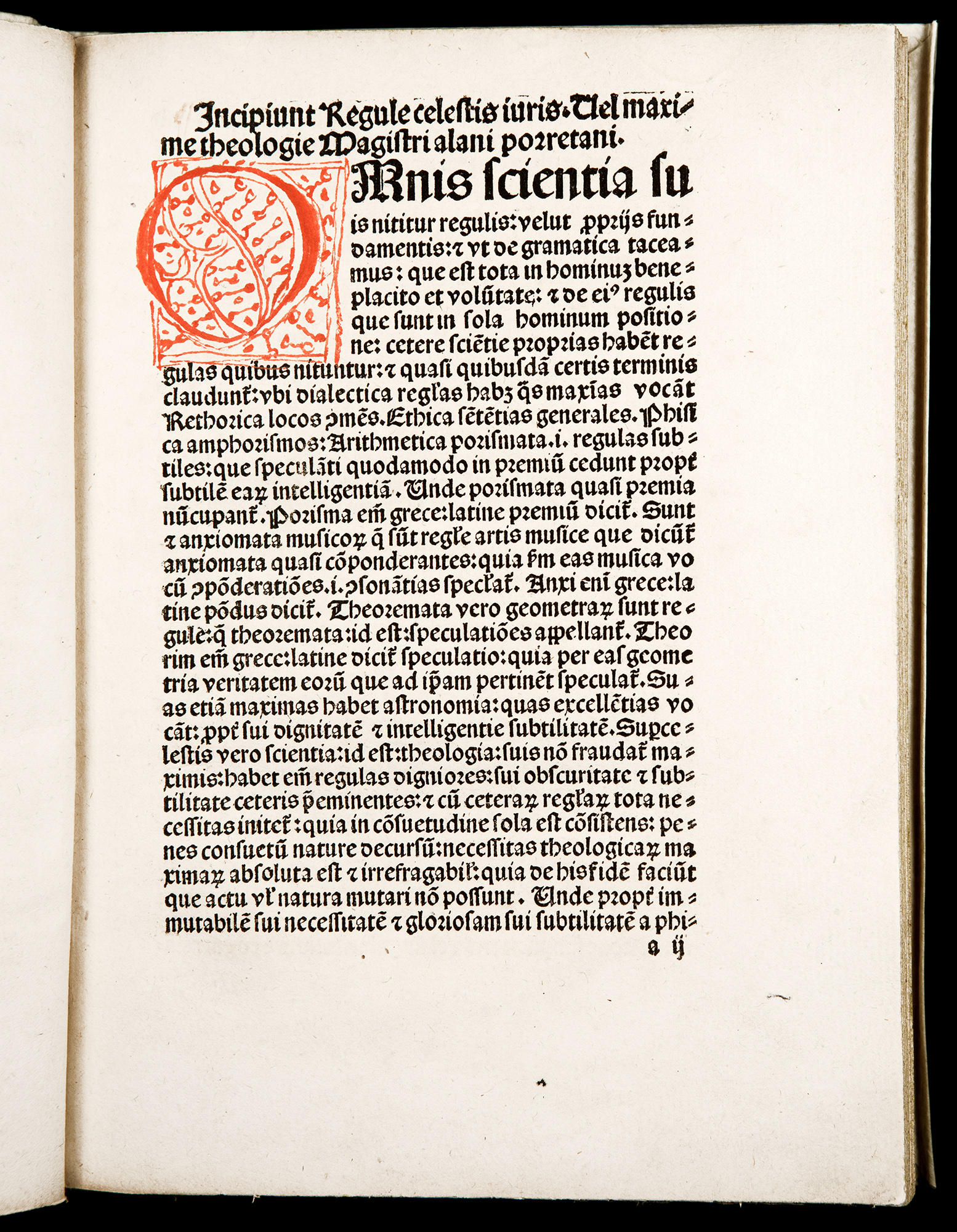 RARE 1ST EDITION of this important summary of theological cosmology, written by a French 12th-century anti-scholastic theologian and one of the foremost didactic poets of his day. This influential work puts forward a series of philosophico-theological propositions aiming to establish a rigorous axiomatic basis for the science of theology, in a way similar to what Euclidâs Elements did for the science of geometry.

Alain de Lille was âa Cistercian, honored by his contemporaries as the Universal Doctor. He was born in Lille; he taught at Paris and Montpellier before retiring to CÃ®teaux. Alain attempted to give rational support to the tenets of Christian faith in his writings. He held that the mind unaided by revelation can know the universe, but by faith alone can man know God. Although his thought was largely Neoplatonic, he made use of numerous Aristotelian and neo-Pythagorean elements. The mathematical and deductive method had an important place in the working out of his theology.â (Encyclpaedia Orbis Latini)

âThe Regulae caelestis iuris circulated under several different titles: Theologicae regulae, Regulae de sacra theologia, Maximae theologiae, Liber de maximis theologiae, De maximis theologicis, Axiomata theologica. Beginning with the postulate that 'each science is grounded in foundations which are proper to it,' this writing is an attempt at stating systematically the rules of theology. This organized set of 134 propositions, which are analyzed, commented upon or demonstrated, offers an axiomatization of theology, that is the definition of a set of principles that theology needs in order to be constituted as a rigorous science, reminiscent of Boethiusâ treatise De hebdomadibus.

âThis is the first attempt to provide theology with a scientific character, by presenting it according to a geometrical organization, and by applying logic and grammar to it. This work is inspired by Boethius, the Chartrians, and the Liber XXIV philosophorum â an anonymous text of supposed ''hermetical'' origin - and is pervaded by Neoplatonic henology. The starting point is not, as it was for Boethius, esse, being, but the One in the form of the monad. The first rule is 'the monad is that which makes any reality one.' God is first considered as One or unity (monas) before being considered according to the metaphysical categories of esse, simplicity, and form. This monad is God-One, through which all unities and pluralities and, therefore, beings come into existence. [â¦] According to Alan, God is really One, but does not have being: â[â¦] of God, who is the being of all things, there is no being, because in order to be he does not participate in anything.' A 'form without a form' or 'form of forms,' God is 'the first substance [...] called ousia' â in the words of the Liber XXIV philosophorum, 'an intelligible sphere whose centre is everywhere and whose circumference nowhere.' Alan's axiomatization of theology contributed, more than any other work, than any other work, to the evolution of the old sacra pagina, into a proper 'theological science,' which took place at the beginning of the thirteenth century. Alan's text inspired Meister Eckhart's idea of an Opus propositionum, the set of the 1,000 theses necessary to an axiomatization of theological knowledge.â (Henrik Lagerlund, Encyclopedia of Medieval Philosophy, p.36)

âIn his Regulae celestis iuris, HIS THEORETICAL MASTERPIECE, he clearly states that there is only one science that is really necessary, and he calls it theology, not philosophy: âWhile the necessity of the axioms, on which other sciences are founded, is subject to change, because it consists only in the usual course of nature, the necessity of the axioms of theology is absolute and not subject to any mutation, because it is founded on realities that cannot be changed, neither by human act nor by natureâ. In a time loaded with feverish excitement at the re-discovering of Greek and Arabic scientific texts, Alanâs Regulae reflect their authorâs fascination with the idea of an absolute science made of axioms, each one of which generates another in an all-necessary chain of propositions.

âHis Regulae celestis iuris were an attempt to transpose in the field of metaphysics what Euclides had achieved in that of geometry: a set of ârulesâ, that is of propositions that could explain the whole of reality, from God to creatures. Being axiomatic and the only necessary science, theology in Alanâs thinking can thus be basically understood as nothing else but metaphysics, the same âqueen scienceâ that was already present in Aristotle.â (Carlo Chiurco, The Necessary Ruler: The Role of Monarchy in Alan of Lille and Dante, International Medieval Congress Â«EmpireÂ», Leeds, UK, 2014)

Text in single columns, 32 to 35 lines per column. 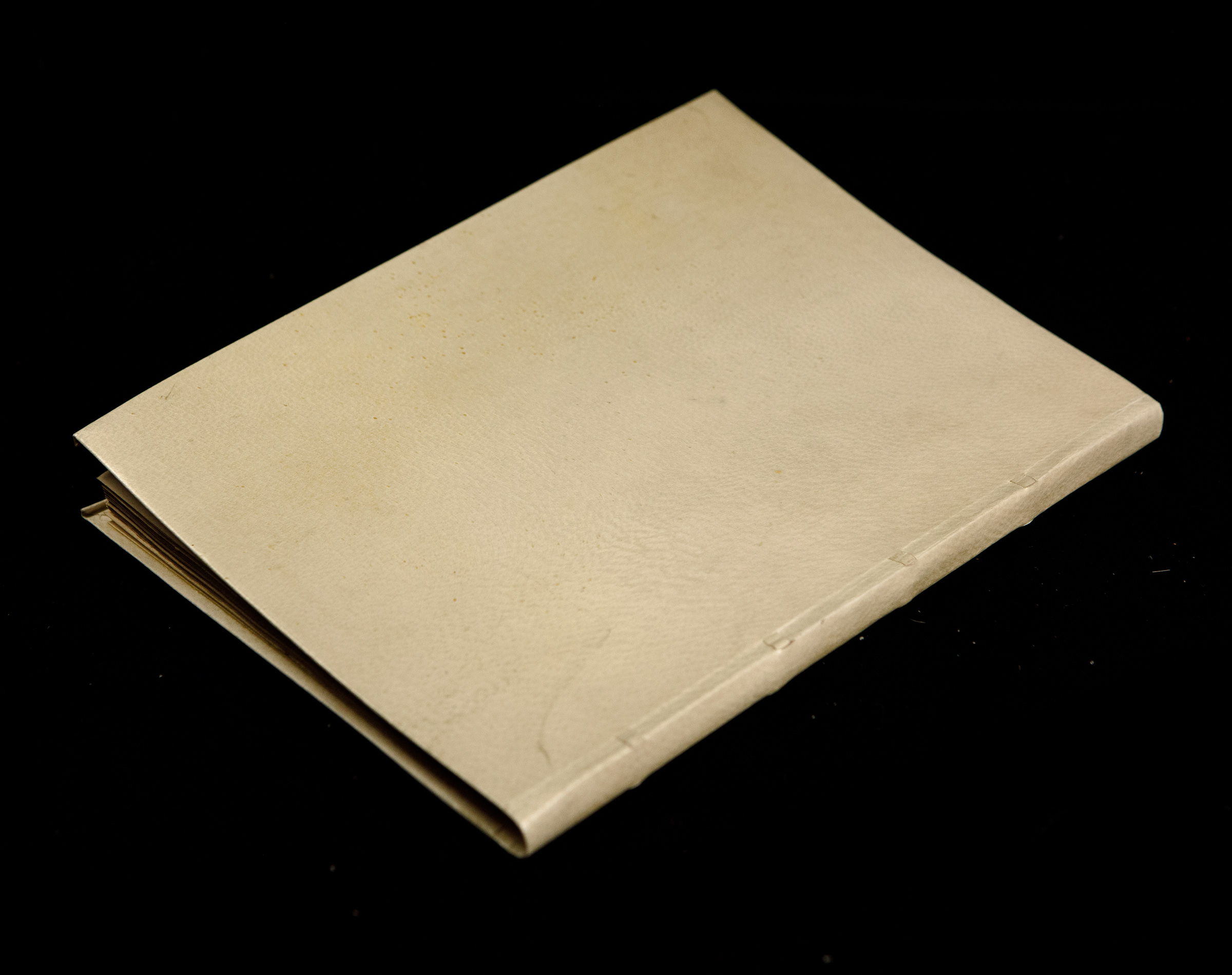 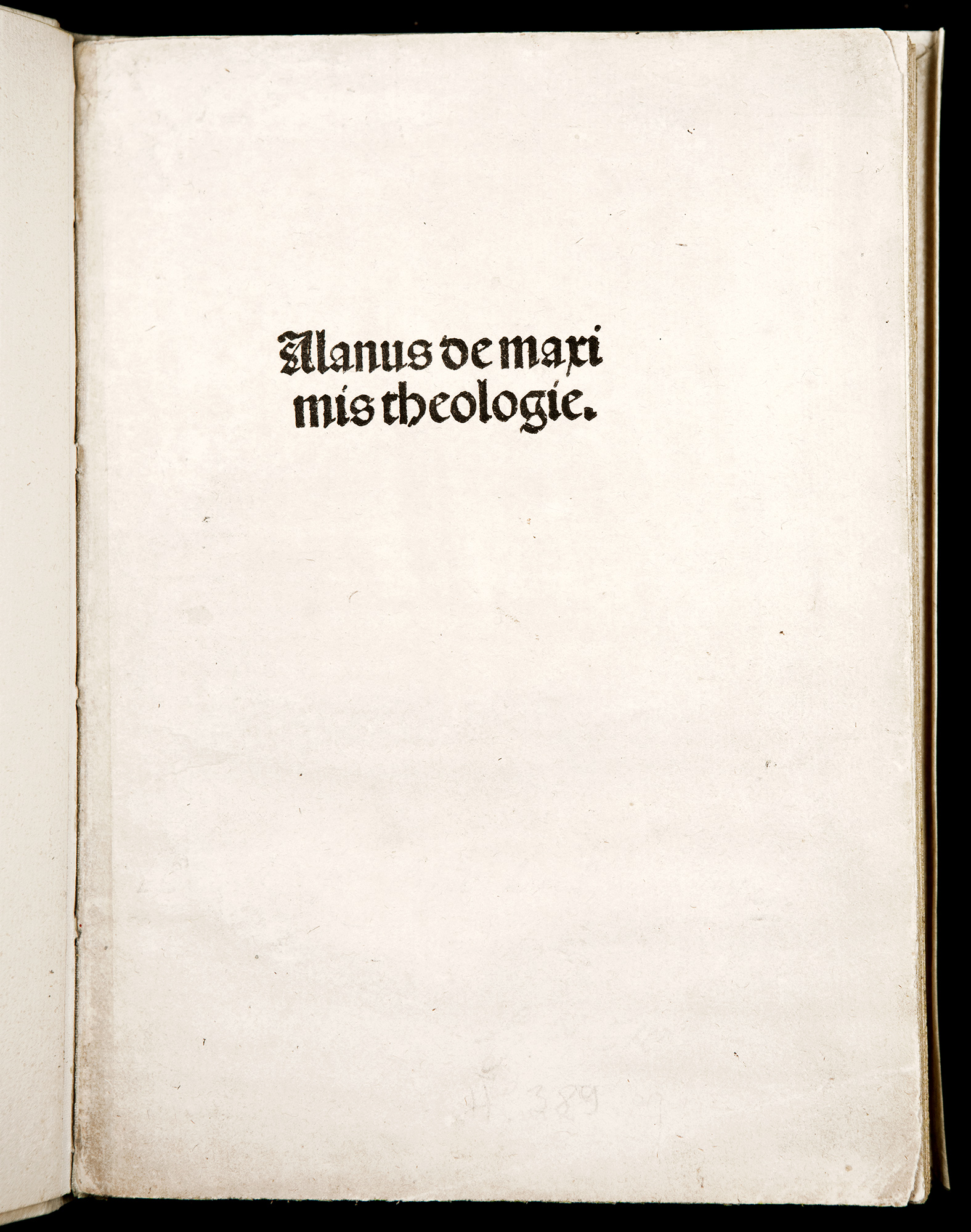 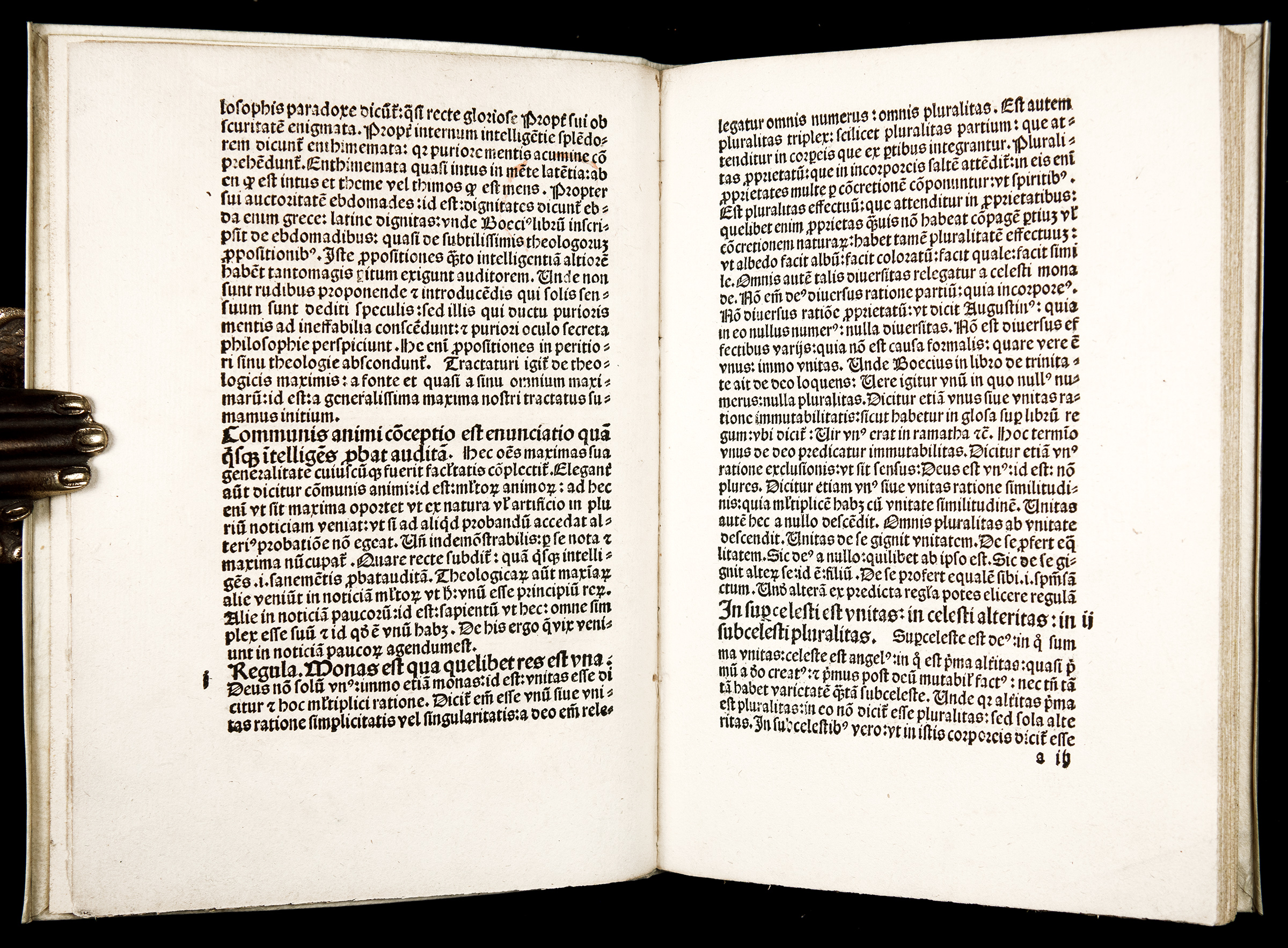 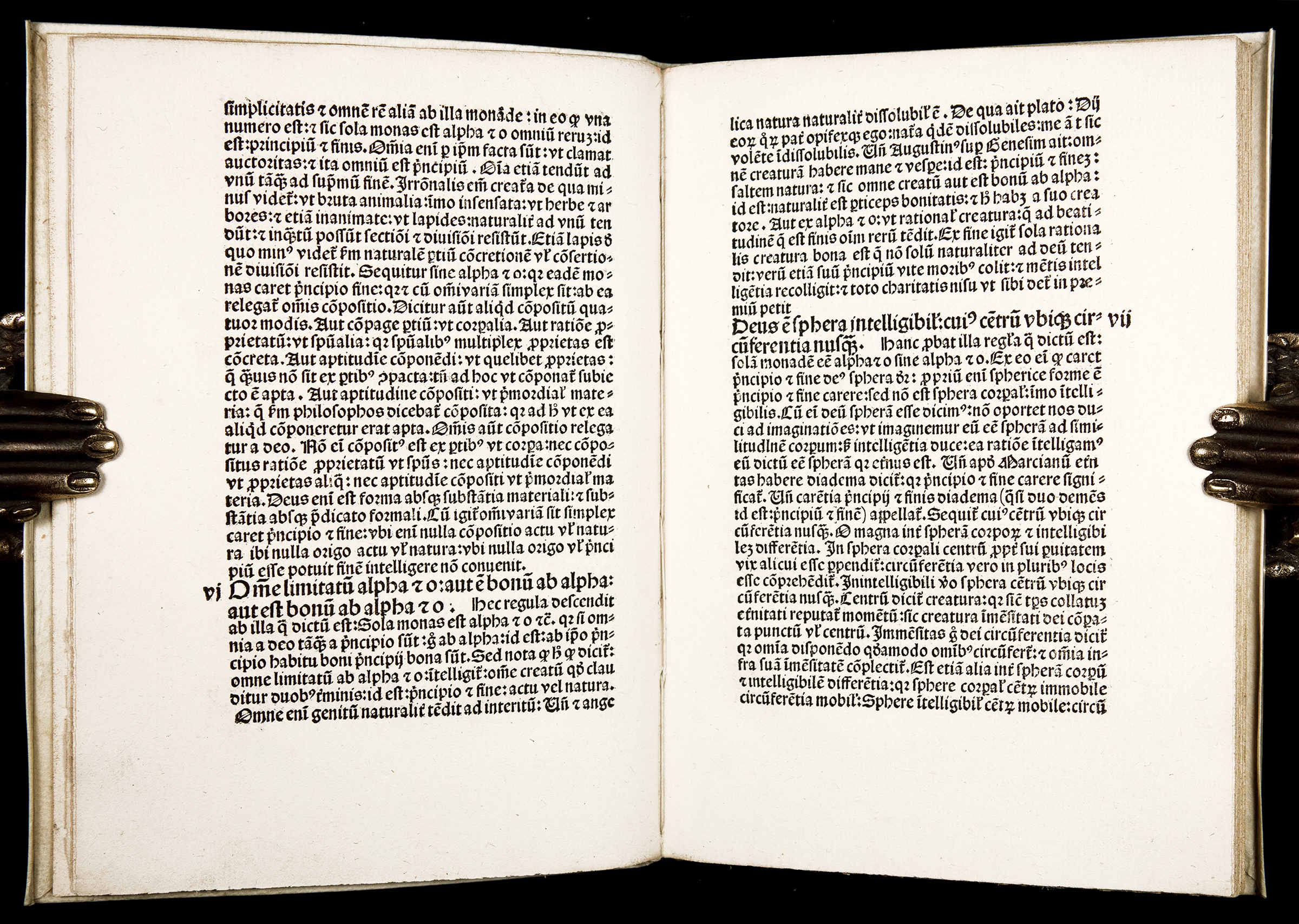 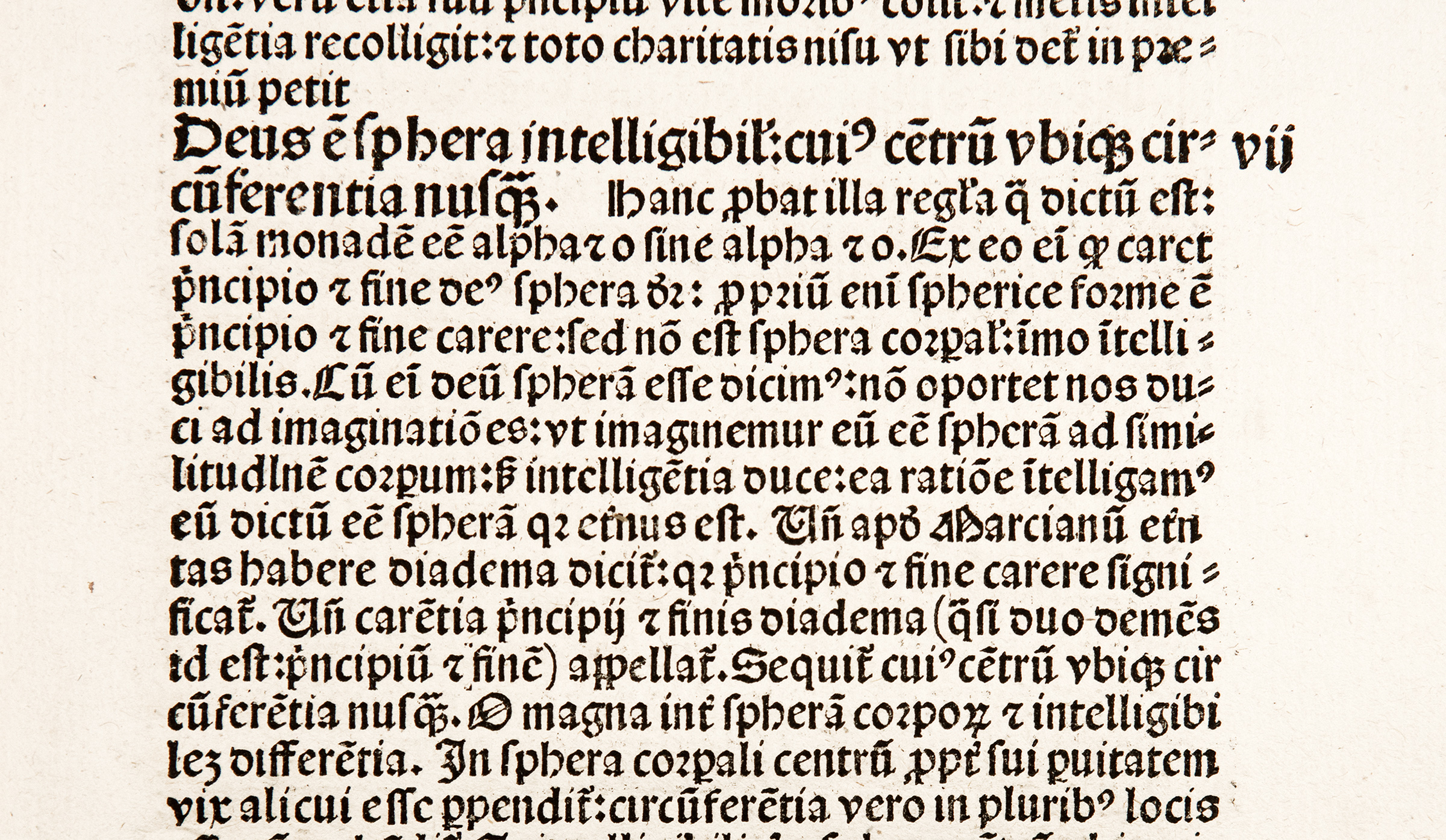 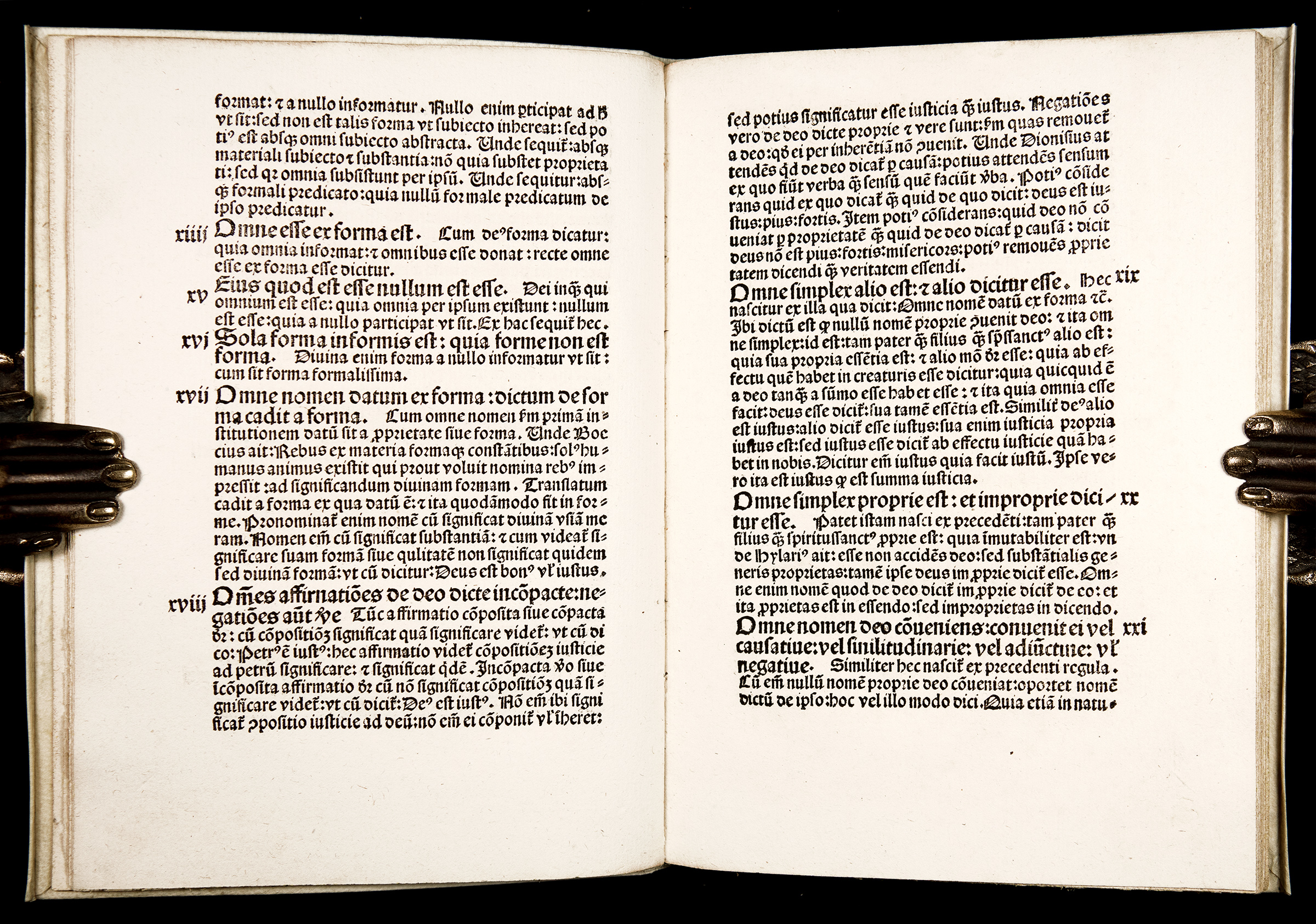 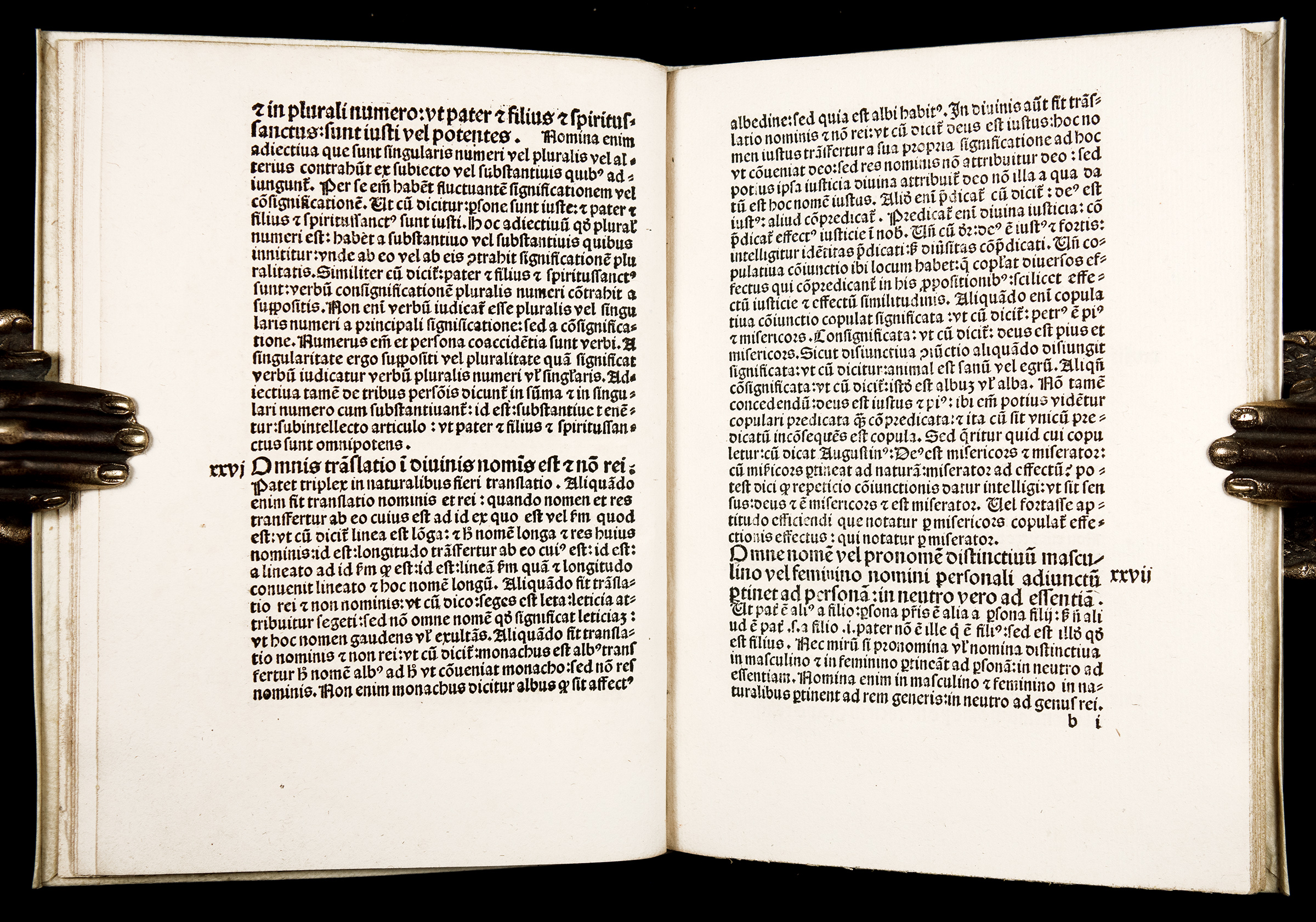 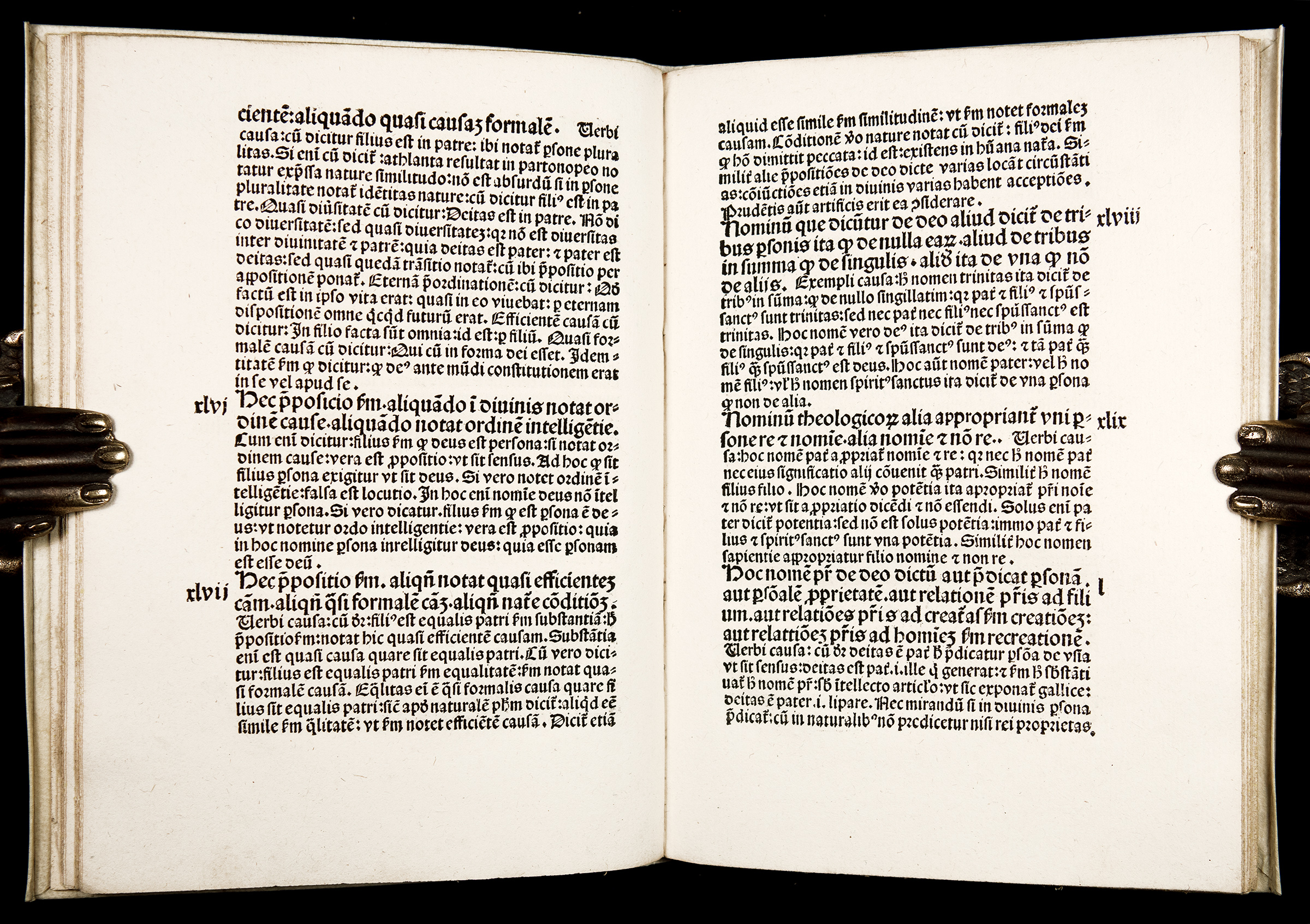 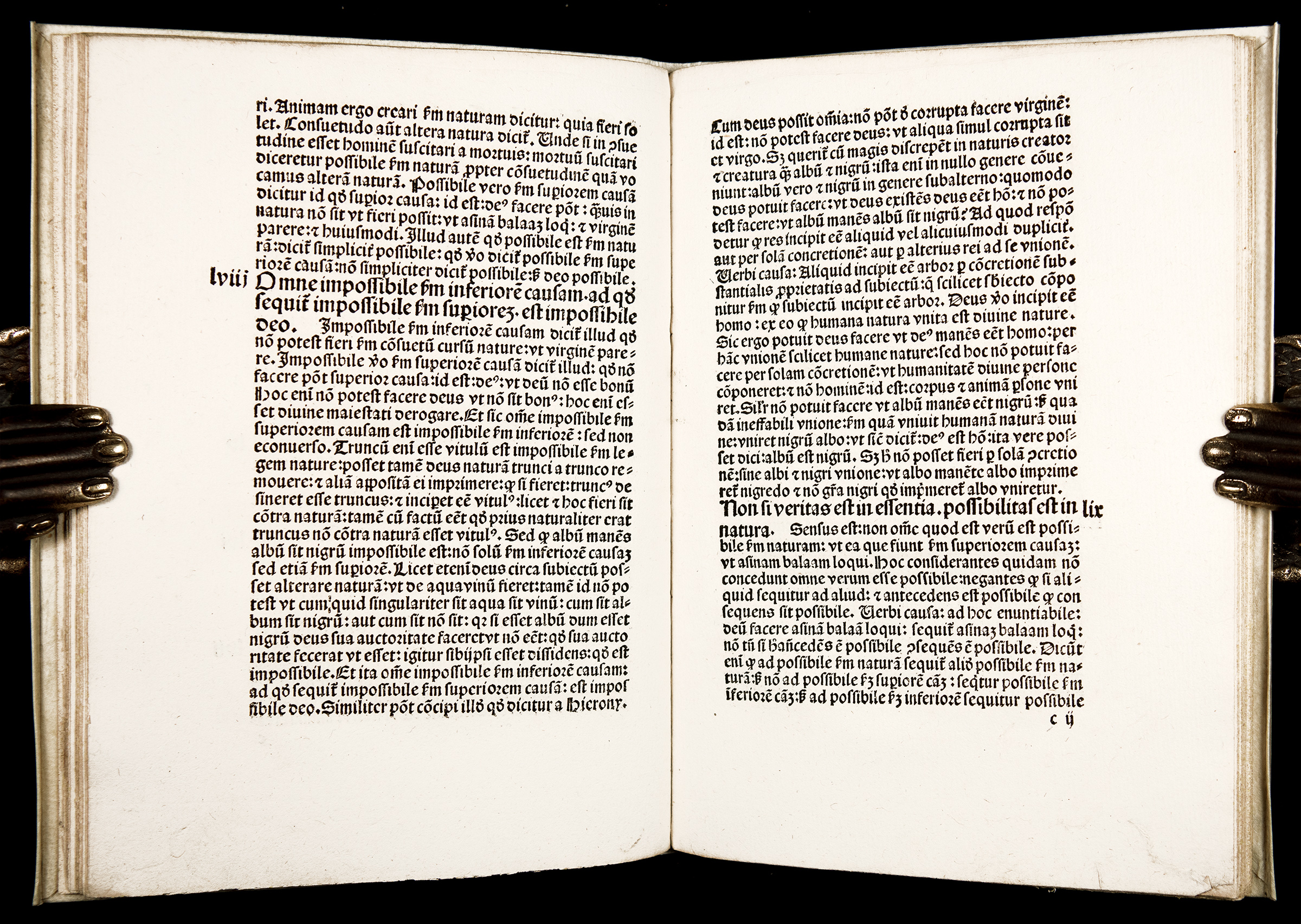 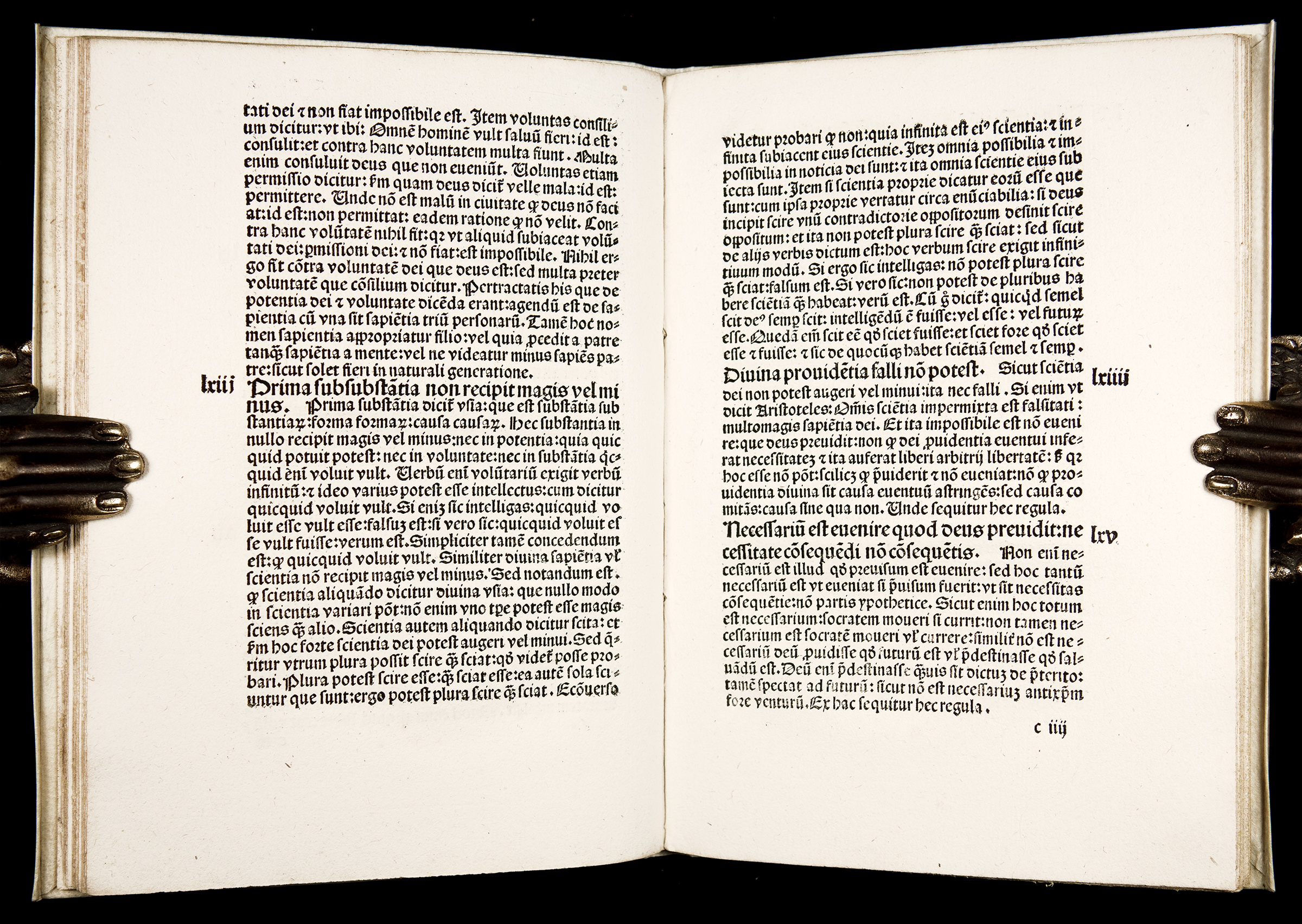 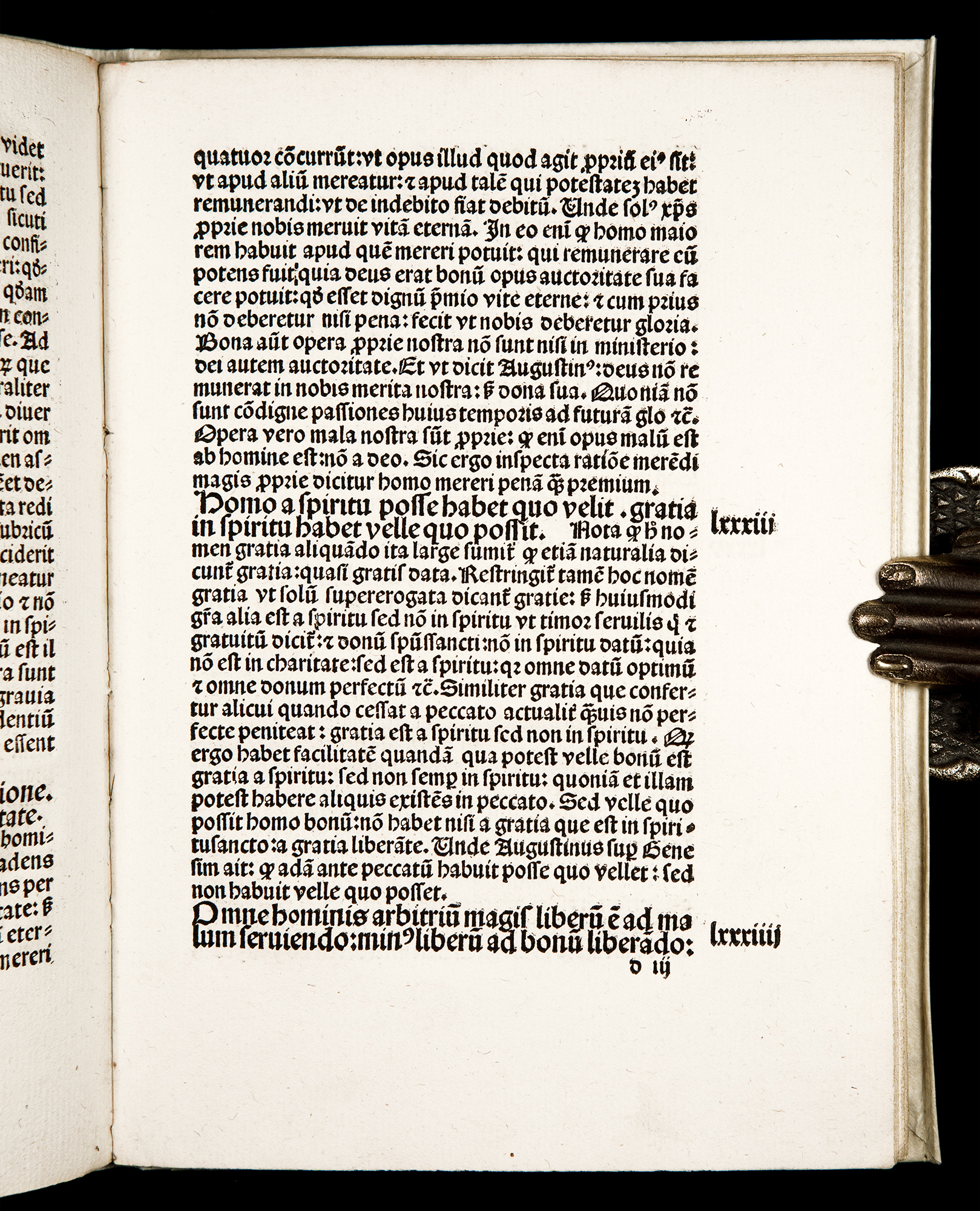 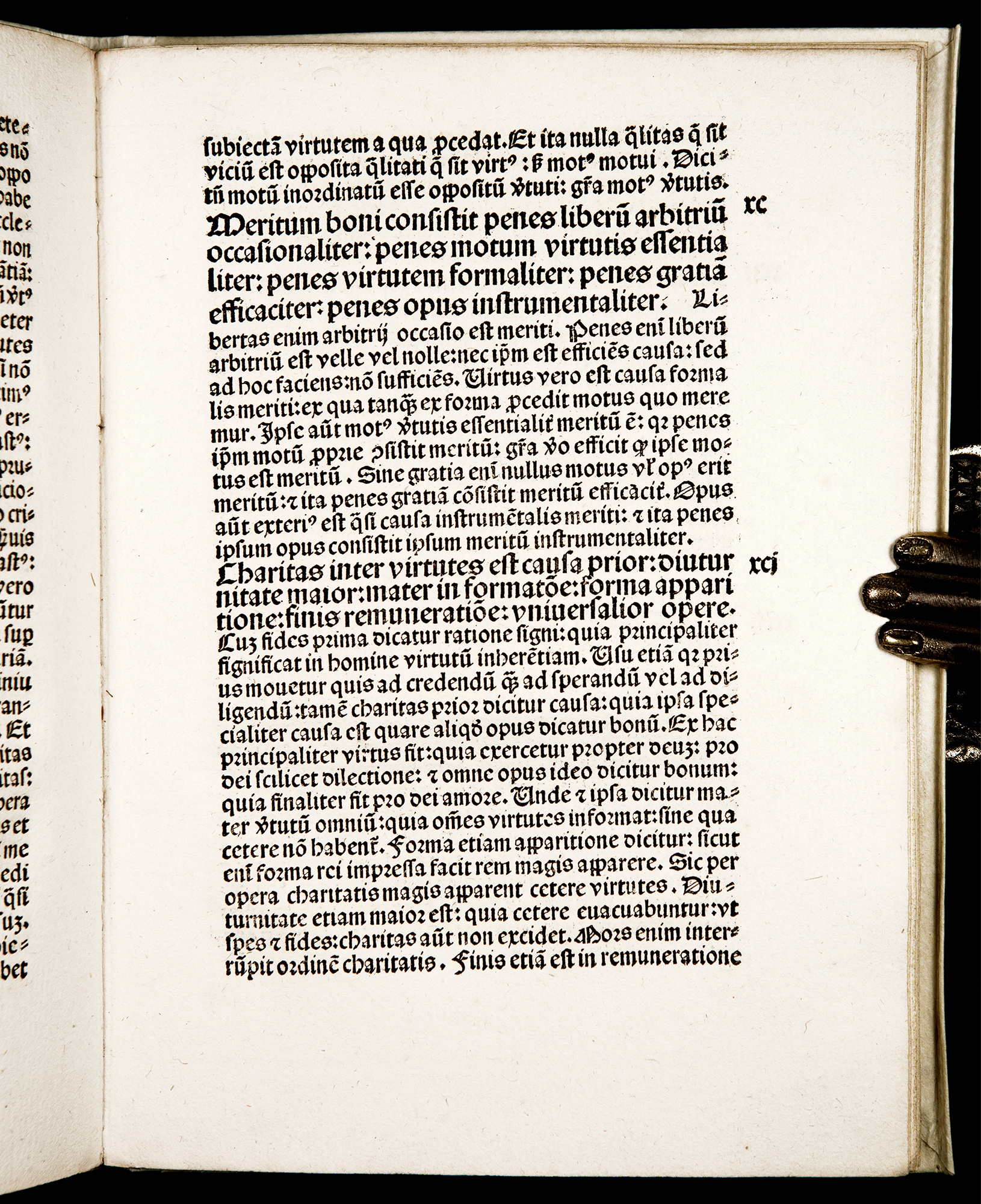 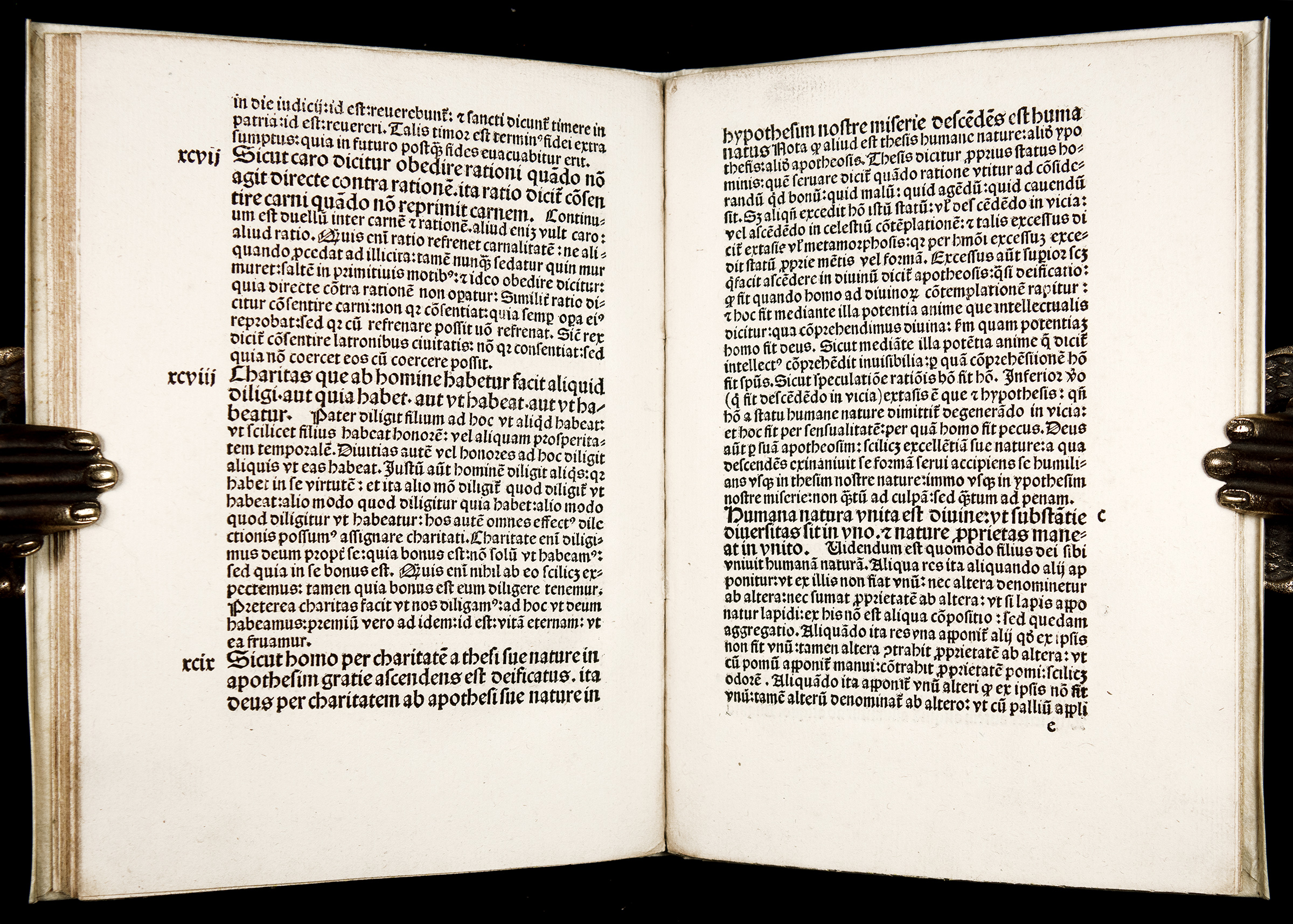 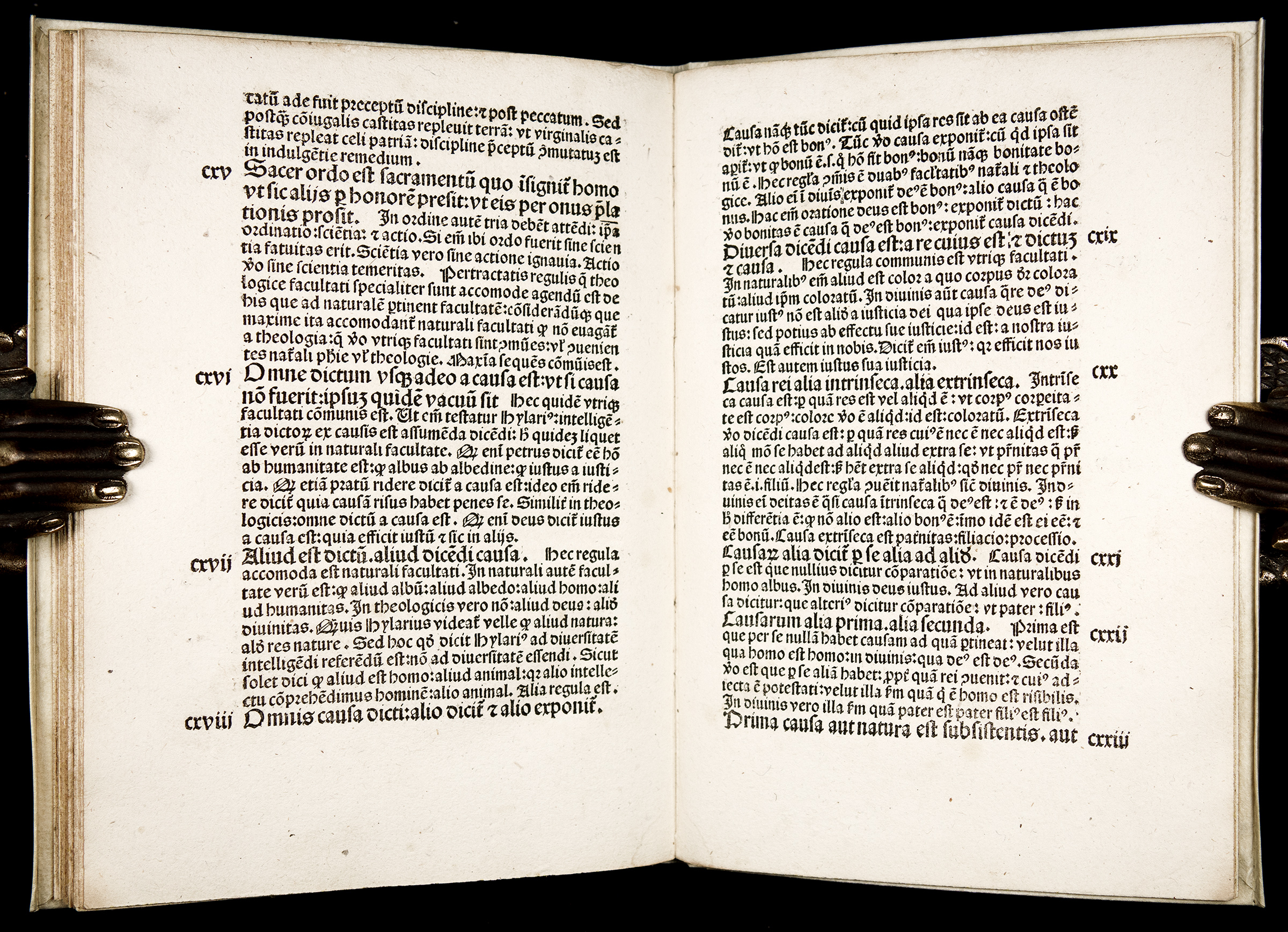 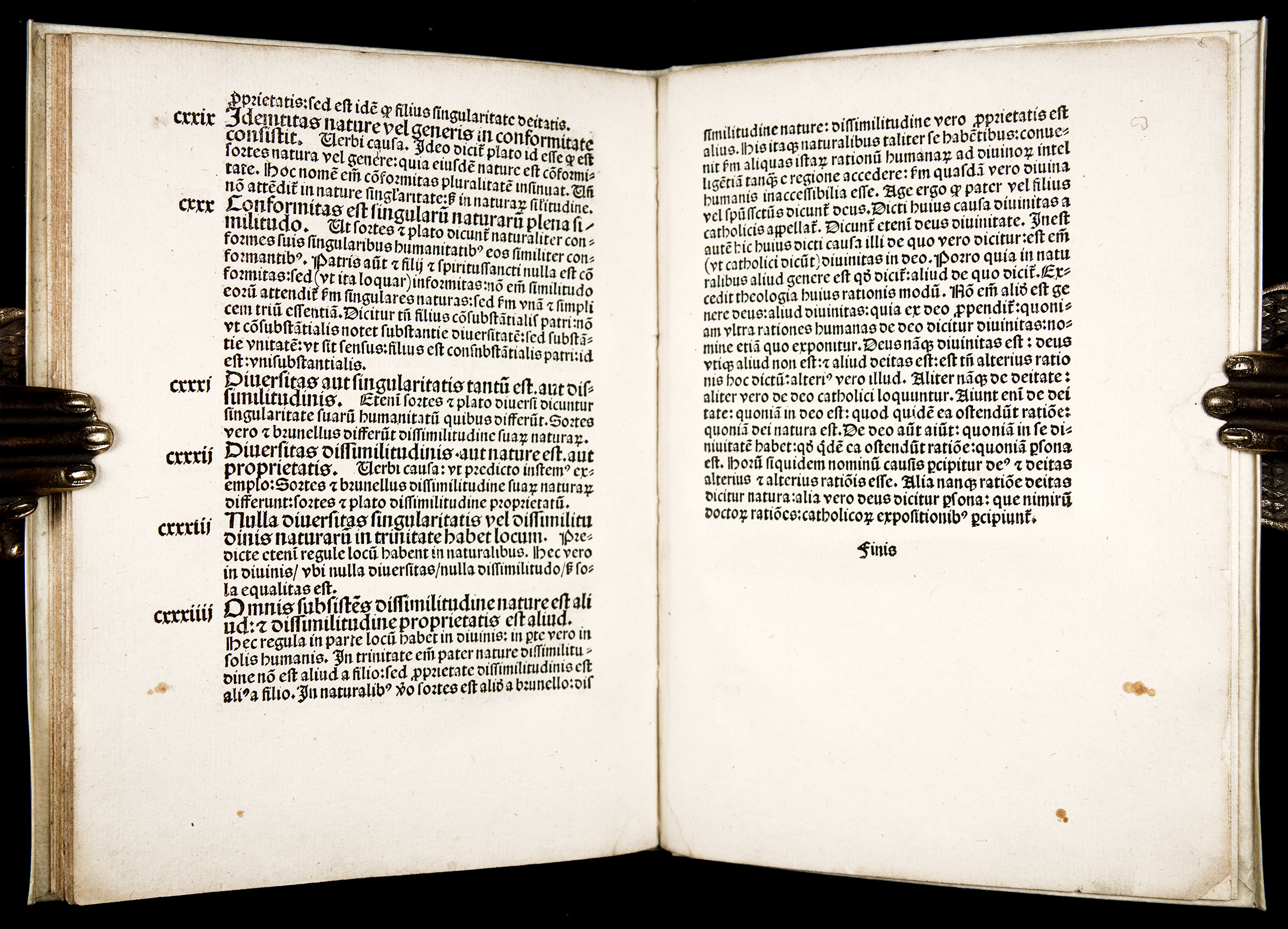